With Volatility Rising, What Else Might This Year Of Precious Metals Bring?

beyond $26 an ounce? You’d better believe it. With stopping just $25 short of $2,000, its so-called “poorer cousin” isn’t doing too badly in what’s shaping up to be The Year of the Precious Metals. But the path higher will likely be fraught with volatility.

This month alone, silver has gained 38%, making this its largest one-month increase, in percentage terms, since December 1979.

As Dumb Wealth, an investment portal that attempts to educate investors on hard-to-answer questions, said in a blog posted this week on Seeking Alpha:

“Valuing precious metals—which don’t provide a cash flow—is an art form. There is no absolute correct way to do it. Will silver actually reach triple digits? Nobody can say what the ‘correct’ gold-to-silver ratio is, but we can use history as a guide.” 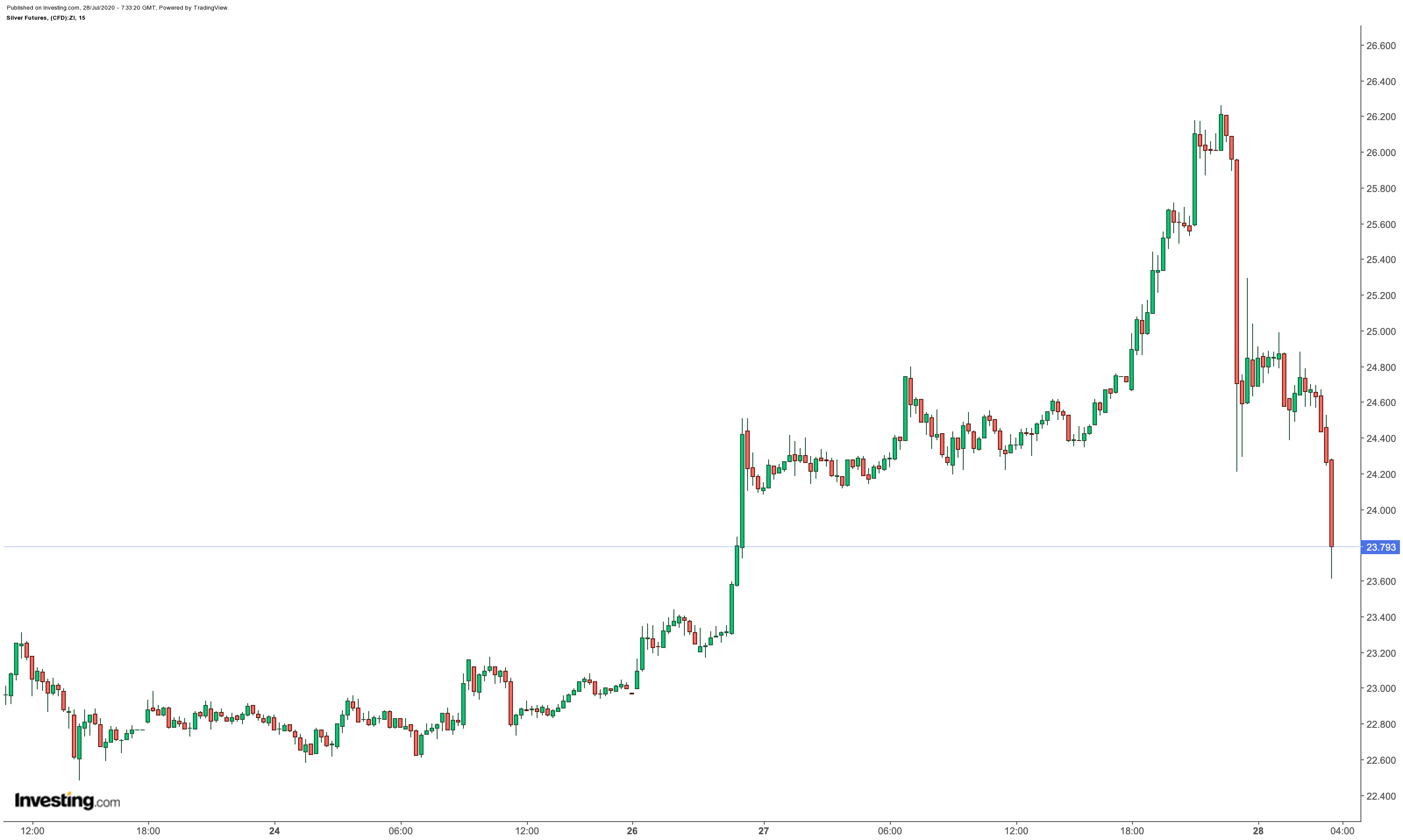 In terms of the relationship, or , between the two metals, silver went as high as $50.35 an ounce in January 1980, when gold was trading at around $875. That meant that it took 17 ounces of silver to buy one ounce of gold, putting the ratio at 1:17. Today, the ratio is 1:77, meaning silver has been devalued almost five times to the relative value of gold in the four decades since.

And while the writers at Dumb Wealth question whether a record of $100 an ounce for silver is possible—and we ask ourselves what the remainder of 2020 could yield for precious metals—a quick look at some of the price action that has taken place today alone shows just how out of whack things can get in under 24 hours.

Jeffrey Halley, an analyst for online brokerage OANDA, recounted in his regular morning report that nerves of both precious metals traders and analysts were frayed, as a sudden reversal over the space of 30 minutes wiped $44 off the value of gold, which had reached a record $1,974.40, as well as the $2 that boosted silver to eight-year highs of $26.26.

“To give readers a clue just how wild the morning session has been … net, silver has fallen 6.0%, and gold by 1.50%, since I started writing!”

While the recovered, following the snapback in precious metals, it was an after-the-fact action and not the catalyst for the reversal, Halley said. The dollar, which tumbled to 2-year lows earlier on Tuesday, had been one of the primary drivers for the break higher in gold and silver.

“I suspect liquidity and itchy trigger fingers have played their part,” Halley said in his conclusion as to what could have transpired in that half-hour of madness.

“Silver is a savage mistress at the best of times, with liquidity usually evaporating on aggressive uni-directional movers. The market may well have reached for stop-losses in both in early trading, with liquidity thin, followed by an equally sharp reversal after mission accomplished.”

The , which serves as a proxy for implied volatility for silver, has topped 65% today, something seen only on a handful of occasions since the inception of the index in 2011. 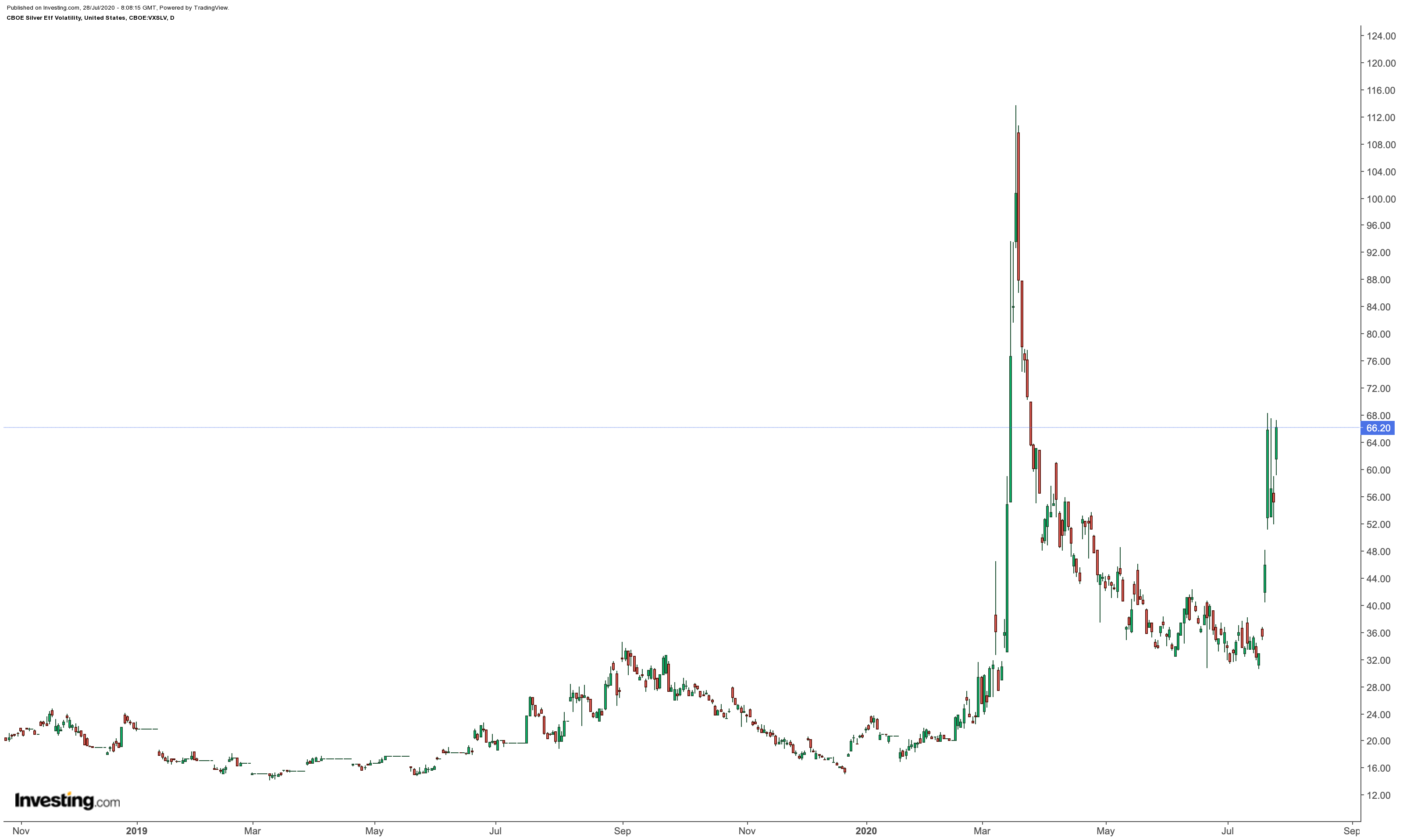 Christopher Lewis, a precious metals who blogs for FX Empire, said he liked the idea of buying silver on dips, but added there wasn’t really a decent opportunity for that yet.

“These types of moves get massive pullbacks and can cause absolute havoc to your account if you get caught buying at the top. Experience has taught me that as soon as you buy a market that ‘cannot go down’, it does. Furthermore, it almost certainly goes in your direction after you get stopped out.

Lewis, however, makes clear that he is “not looking to short this market, even if I knew, without a doubt, that we were going to fall from here.”

“Pullbacks at this point will only offer value for those who are going to get involved in the market, because silver clearly has much further to go. It is likely that we have a ‘hard floor’ near the $20 level, assuming that we can even get down there.

I think it is very likely that we will see a lot of noisy trading, but ultimately the buyers will continue to push silver to (a) much higher level. In fact, it would not surprise me at all to see $50 in the next year.”

Watch Out For The “Fast Money Stampede”

Sunil Kumar Dixit, another independent analyst and technical chartist on precious metals, said he expected gold to witness some correction if it stayed below $1,933, visiting $1,910 to $1,900.

“A close below $1,900 would signal a bearish reversal top, which means correction for a day or two.  Gold is in clear uptrend so corrections and consolidations are considered as energy gaining for yet stronger leap. Buying on dips in value areas is a good idea.” 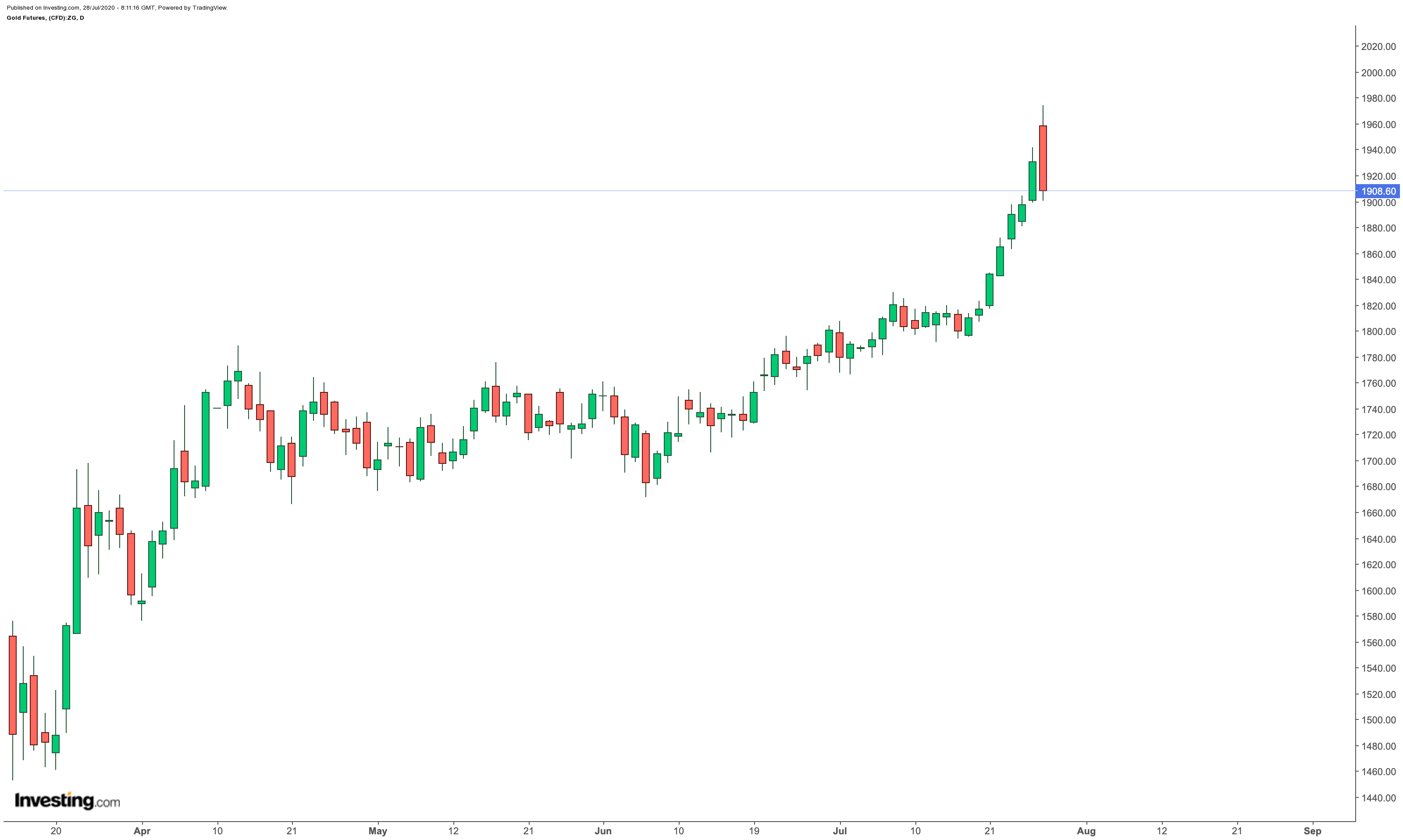 OANDA’s Halley said a convincing fall through to $1,835 on gold, or $24 on silver could trigger another “fast money stampede for the door.”

“But given the underlying momentum of the rallies, these levels should now hold, as the underlying base case for higher precious metals is stronger than ever.”

Disclaimer: Barani Krishnan does not own, or hold positions in, the securities he writes about.