Away from oil’s rollercoaster ride of the past week and suspense over where gold could be headed, another commodity has been having drama of its own. spiked to 14-month highs in recent days and could continue climbing on tight global supplies — if crude prices don’t fall off the cliff, that is.

Before we go further, non-regular followers of commodities should know of the dependency relationship that sugar has with crude oil. And that is: higher energy prices encourage the use of cane to produce the biofuel rather than sugar. 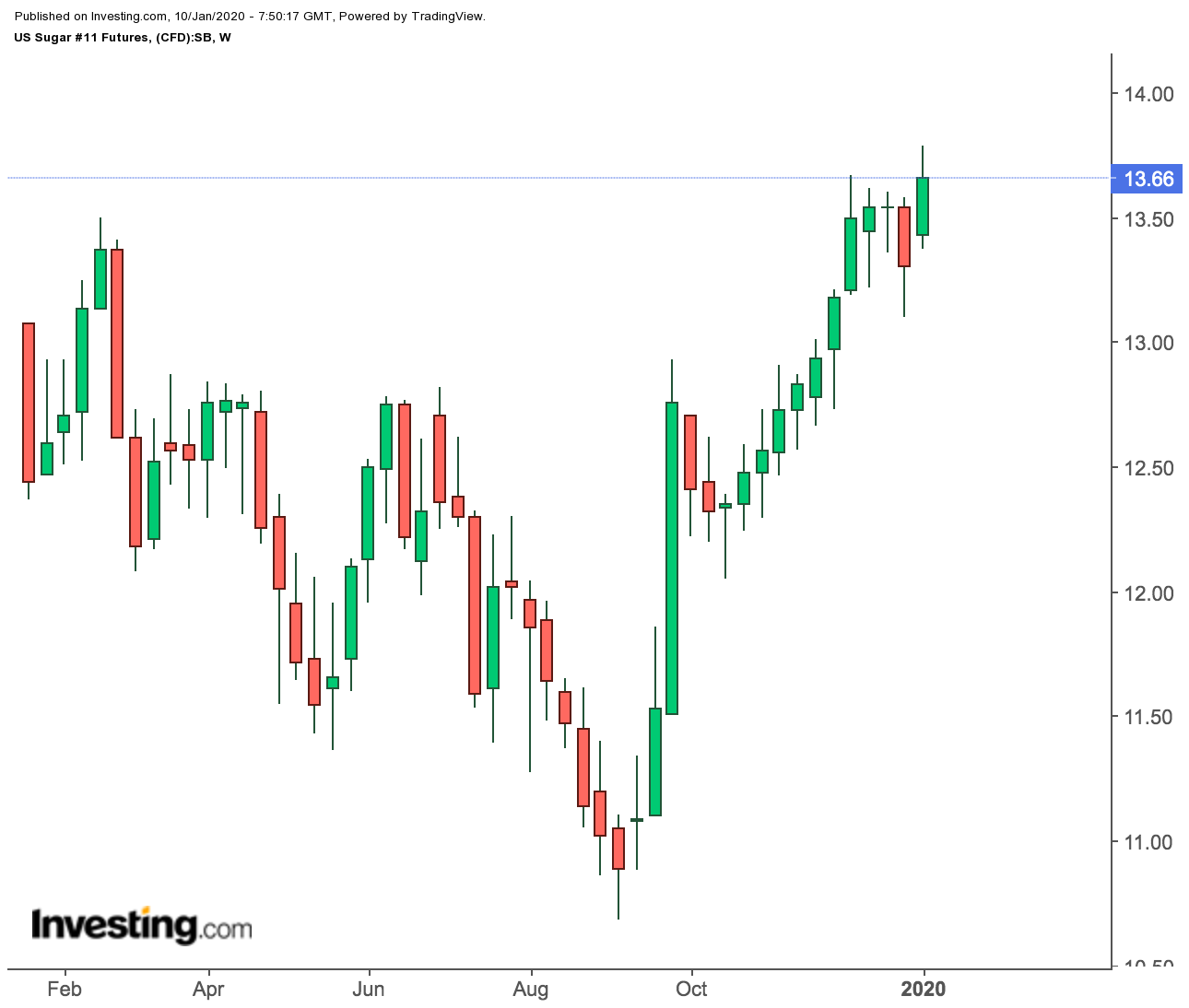 Exactly a week ago, oil prices catapulted from their underwhelming start for 2020 after the U.S. killing of Iranian general Qassem Soleimani came close to putting the two countries at a war path.

, the benchmark for U.S. crude, hit 8-month highs of $65.65 and , the global oil benchmark, surged to near four-month highs of $71.28. But just as the oil rally seemed to be getting started, it got shot down as both countries decided not to extend hostilities, even after Iran launched rockets on U.S. airbases in Iraq to retaliate against Soleimani’s killing.

On Thursday, U.S. crude was back below $60 a barrel while Brent hovered at $65, pulling prices lower too from near 7-year highs above $1,600 per ounce.

While the oil rally was brief, it was sweet for producers of cane, who haven’t experienced a sweep higher in prices for a while. With U.S. refiners mandated to use at least 10% ethanol in their gasoline blends, raw sugar hit its highest levels since October 2018, reaching 13.79 cents per lb in New York trade by Tuesday — a day before the stand-down in the U.S.-Iran conflict.

For those long raw sugar, the good news is the market’s still holding near its recent highs as supply concerns in major producing countries Brazil, India and Thailand are keeping the market supported, even after the sudden vacuum in geopolitical tensions.

After two days of selling as crude prices took a hit, raw sugar futures in New York jumped nearly 2% on Thursday to settle at 13.71 cents, just 0.8 cents lower from this week.“The market appears to be tight around the globe,” Jack Scoville, analyst at the Price Futures Group in Chicago, said, explaining the strength in sugar.Scoville added:

“Reports indicate that little is on offer from India. Thailand might also have less this year due to reduced planted area and erratic rains during the monsoon season. There are currently reports of a drought in the central-south area of Brazil, although there are also forecasts for important rains in the next week or so.”

Investing.com is recommending a “Strong Buy” for raw sugar in its Daily Technical Outlook. Our projected top-end resistance of 14 cents a lb means a potential gain of at least 2% in the interim for raw sugar before consolidation sets in again.

“Sugar remains in a strong upward channel,” said Eric Scoles, commodities strategist at RJO Futures in Chicago. “The main fundamental story of a sizable global production deficit is still very much in play and continues to support the multi-month rise in prices that we have seen.”

But Buyer Beware Of Volatility

But both Scoles and Scoville say the market could see more sellers too as it got higher.

“It’s possible we may find some bulls take their profits and step to the sidelines, said Scoles. “My analysis of this market is still very bullish, but bulls may need to brace themselves for volatile environment.”

Scoville said over the longer term, there was still “more than enough Sugar for any demand”:

“Reports from India indicate that the country is seeing relatively good growing conditions and still holds large inventories from last year.” “India will have to sell sooner or later. For now, these supplies are apparently not moving.”