Will U.S. Shale Oil Roll Over And Play Dead As OPEC Wishes?

Saudi Oil Minister Abdulaziz bin Salman made two audacious bets last week. His first was that OPEC’s biggest “serial offenders”—Iraq and Nigeria—will stop breaching their quotas and produce as required from now on.

His other, and just as important, gamble: U.S. shale oil drillers will be disciplined as well in not overproducing, particularly with the reward of higher prices coming their way from the tighter supply situation created by other global oil producers.

Phil Flynn, energy analyst at Chicago brokerage Price Futures Group, noted amusedly in his Monday morning note that bin Salman tried to sound like a savior for financially-stressed U.S. drillers by projecting OPEC as their only trustworthy source of market stability in times of difficulty.

Wrote Flynn, quoting bin Salman on the position of OPEC and Saudi Arabia:

“We want to be more helpful. I think the world expects us to lead. When the market requires some stabilization, we come to the aid of the market.”

‘We’re Here To Save The Day,’ Saudis Tell U.S. Drillers

Despite being an oil bull himself, Flynn couldn’t miss the irony in the Saudi minister’s words, as the market of the past five years has been shaped by little more than OPEC-shale rivalry. “Here they come to save the day,” Flynn remarked, referring to the Saudis, not without a trace of sarcasm.

Yet he conceded that bin Salman was right to an extent: the shale industry was certainly in a very challenging year and in need of help. There have been 33 bankruptcy filings by drillers within the first nine months of 2019, versus 28 for all of 2018. The number of rigs drilling for oil have fallen to a 33-month low of 663.

Even before their meetings in Vienna last week, OPEC officials have been prophesying doom for U.S. drillers. Secretary-General Mohammed Barkindo said in late November that the shale slowdown “is almost graduating into a fast deceleration” and that OPEC had been told by U.S. drillers “that we are probably more optimistic than they are, considering the variety of headwind challenges they are facing.”

So, are U.S. oil producers ready to roll over and play dead, as bin Salman must be secretly hoping, so that OPEC can again have the indomitable power it did before the shale oil revolution of 2014 in determining global supply-demand and prices of crude?

If it’s Goldman Sachs, the answer you get will sound a lot like the party line that’s coming out of Vienna.

One of the oil market’s most influential voices until its price calls and forecasts were blunted by the dynamics of the shale boom, Goldman insists that it will take years for U.S. drillers to clean up their debt, capacity and emissions excesses to become a major threat to OPEC again.

In a note to clients issued right after the conclusion of the OPEC meetings on Dec. 6, Goldman’s analysts said:

“Expect the recent shale restraint to persist even at moderately higher prices.”

“Poor financial performance, excess leverage and an increased focus on emissions have pushed the cost of capital of shale oil producers sharply higher. Importantly, this pressure is no longer delivered by oil prices like in 2015-16 but by equity and debt markets.”

Goldman Says Saving Cash, Not Burning It Will Be Shale’s Emphasis

The Wall Street bank noted the discipline shown by many U.S. drillers in prioritizing capital preservation and shareholder returns over expansionary spending.

“Our U.S. E&P equity analysts expect that incremental cash-flows above budgeted prices in 2020 will be destined to debt reduction, dividends and buy-backs rather than drilling.”

Oslo, Norway-based consultancy Rystad Energy, however, has a different spin on how the shale play could turn out longer-term, despite OPEC’s arduous efforts to contain the threat of its U.S. nemesis.

Rystad notes that despite the significant decline in the , the pace of spudded wells has not fallen dramatically.

Rystad’s base case is that U.S. tight light oil production will expand to at least 11.6 million barrels per day by 2022, implying a compound annual growth rate of 10% each year between 2019 and 2022.

That is a highly conservative number compared to current estimates by the Energy Information Administration, which has the U.S. already producing 12.9 million bpd for the past few weeks.

Based on that EIA production estimate, the U.S. upstream sector was producing 45% more oil than in October of 2014, despite the sharply lower number of actively operating oil rigs in the United States, noted Dominick Chirichella of the Energy Management Institute in New York.

The rig-to-oil efficiency is clearly proven in the Eagle Ford basin, one of the most prolific of the U.S. shale patches in South Texas.

According to IHS Markit, Eagle Ford has finally became cash-flow positive in 2019 as companies held back on drilling. But that period of profitability could be fleeting as production declines.

“Generating free cash is easy: stop spending on new wells,” Raoul LeBlanc of IHS Markit told Bloomberg. “The catch is that production will immediately move into steep decline in many cases.”

In The End, U.S. Drillers Might Just Have To Drill More

To get the balance right, it would mean many shale producers would have to raise output again—contrary to the “ceasefire” environment that OPEC is counting on. 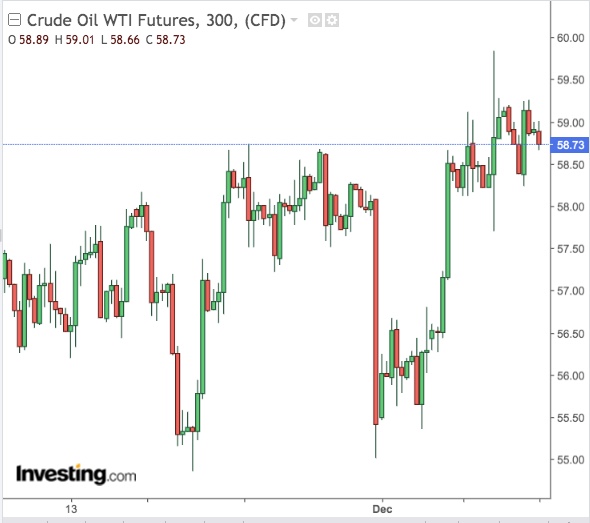 Goldman, in its post-OPEC note, alluded as much.

“There is a limit, however, to this level of U.S. producer restraint in the face of higher prices, with most producers offering compelling returns above $60-per-barrel WTI.”

“We therefore believe that too tight a physical market would once again undermine the OPEC+ cuts.”

WTI, the benchmark, is hovering at $59 a barrel. One of OPEC’s bets might be under threat soon.

The Fed is expected to hold rates ...