Will Silver Get Washed Out With Gold?

They rose together on the bullish fervor that only the rare confluence of events like the trade war and Fed can bring.

Now , often called the poor man’s , looks set to share the bleak fate of its cousin, the yellow metal, as the increasing prospect of a U.S.-China trade deal wrecks the value of safe-havens.

But it’s arguable if such a narrative is fair to silver, which isn’t even a safe-haven.

Aside from its shiny properties that account for some of its demand as jewelry, silver is really an industrial metal that gets tagged as precious under the securitization of commodities.

And in an era where there’s a sell on everything that’s precious — even on recently crowned precious metal king — it probably shouldn’t be surprising that silver’s getting battered as well.

Silver bears aren’t making any apologies, though, for the change in the investment flows toward the metal since the end of summer.

The last time silver had it as good as this was in 2016. This year’s rally didn’t begin at the start of 2019. After a woeful February through May, silver suddenly picked up for a whopping 23% rally between June and August. Since then, its run has been uneven. It lost 7% in September, then gained more than 6% last month, before losing all of that rebound since the start of November.

At its current price of around $16.75 per ounce on New York Mercantile Exchange’s COMEX, silver still shows a 10% gain on the year. 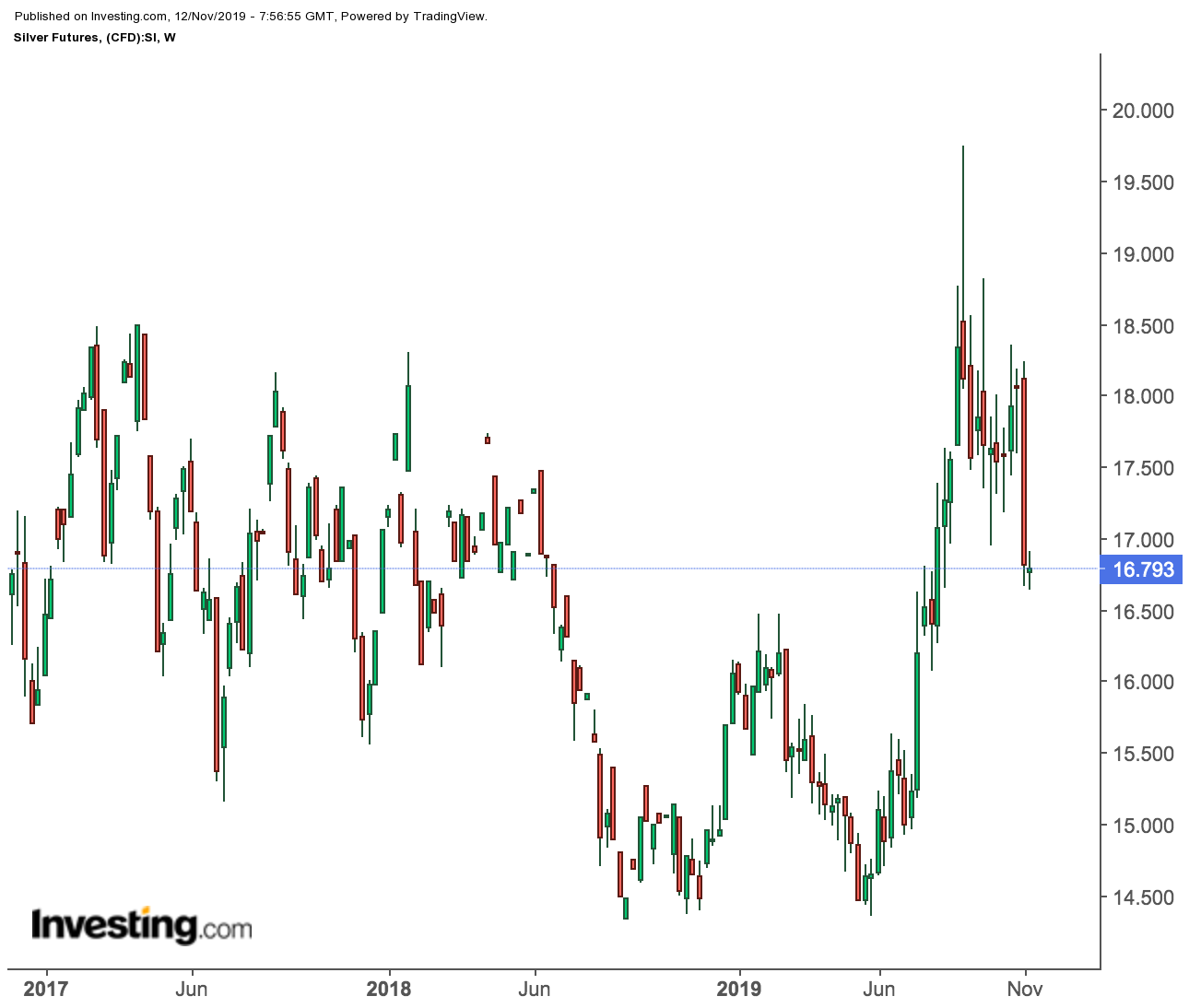 But some analysts see more pain in the immediate term for those who continue to hold substantial long positions in the metal.

The reasoning is that hedge funds — commonly known as Commodity Trading Advisors, or CTAs — are turning silver sellers in droves.

“Silver is playing catchup with gold as CTAs turn sellers with prices below $17.32/oz,” analysts at Canadian bank-backed brokerage TD Securities wrote on Monday. “Although we don’t anticipate a significant change in algorithmic length, investment demand will also likely be weighed down.”

Independent currency strategist Paul Robinson, however, noted that silver has been hit harder than gold.

The metal’s most recent leg lower was on par with the force produced during the last two down-moves from the early-September peak, Robinson said. He added:

“Having made a lower-low beneath the October low, silver is vulnerable to further selling in the absence of solid support nearby.”

“Support to watch arrives via the 200-day MA and twin peaks from January/February, making just above the 16-line an important area to keep an eye on should the price continue to weaken in the days ahead.”

Brokerage ADM Investor Services was more detailed on the likely twists and turns in silver in the coming weeks.

In a note circulated after silver’s settlement below the 9-day moving average on Monday, ADMIS precious metals analysts said:

“The close below the 9-day moving average is a negative short-term indicator for trend. It is a slightly negative indicator that the close was under the swing pivot.”

Observing the Relative Strength Indicator, or RSI, of silver, they added: