Will Oil Stay Down, With All The Positives Suddenly Turning Negative?

For at least two weeks, oil prices had an unreal, even embarrassing feel to them, rallying in an almost straight line on the puff that the U.S.-China agreement was “close” to happening, coming “soon” or basically a done deal that the market just needed to hear about.

Then on Black Monday, the charade suddenly stopped. And the world of crude bulls has eroded since. 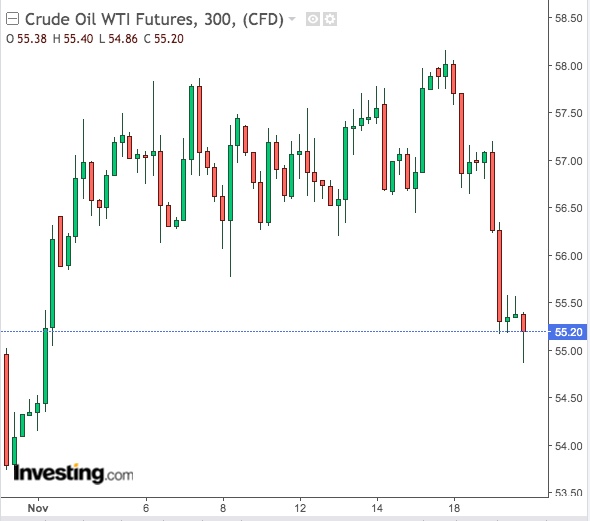 After Tuesday’s plunge of 3% or thereabouts for both and crude—the worst one-day plunge in seven weeks—it can be argued that the immediate upside for oil might be over. If Monday’s slide is added, WTI and Brent have lost about 5% each since the start of the week.

That means, in just two sessions, oil has given back almost all it had gained since its upward charge on Nov. 1.

Tuesday’s rout wasn’t just because traders got fed up of waiting for a trade deal that wasn’t emerging after weeks of meaningless talk by White House officials such as Economic Adviser Larry Kudlow and Commerce Secretary Wilbur Ross.

President Donald Trump showed just how well things were going on the trade deal when he warned his Chinese counterpart Xi Jinping on Tuesday that Beijing must sign a phase-one pact with Washington by Dec. 15 or face the wrath of more U.S. tariffs.

Trade jitters aside, crude tumbled because the algorithmic trading models of oil funds tried breaking above the market’s 200-day Moving Averages and failed.

That set the funds off on a stop-loss mode—a switch in direction compared to their previous two week’s pattern of shadowing the highs on Wall Street’s main indices, which have been even more fixated on the trade deal than oil.

Adding to the gravity of the selloff in oil were signs that Russia was playing mind games again on whether it would support OPEC on production cuts.

According to a Reuters report, Moscow was unlikely to agree to deepen output cuts at the Dec. 5-6 OPEC+ meeting. Russia is a key price support ally in that initiative, which groups it with the 14-member Organization of the Petroleum Exporting Countries.

Also weighing on the market were potential for last week—a huge 6 million barrels, according to industry group API, which the official Energy Information Administration will have to either acknowledge or disprove later today.

Last but not least, there was talk that Aramco, the Saudi oil company headed for its first public share sale, might have trouble raising money from international investors.

So, from just trade talks, suddenly the entire kitchen sink got thrown at the market.

The question is whether the downtrend will continue, or oil bulls miraculously get another lifeline thrown at them.

At the time of writing, in late Asian trade, WTI and Brent were still in the red, although that could change in European and U.S. trading.

Little Reason For Price Comeback, Though Technicals Could Support

Fundamentally, there’s little reason for oil to be higher as all of the market’s positives—from the trade deal to OPEC and even the relatively inconsequential Aramco IPO—are emitting negative signals now.

Analysts at Bernstein said If OPEC doesn’t cut production by a further 500,000 to 1 million bpd, Brent crude may return to $50 in the short term.

“Current CTA positioning hasn’t been this long since September’s Abqaiq attacks in Saudi Arabia,” Citigroup’s analysts said, referring to the brief double-digit gains in oil after the aerial raid on the kingdom’s largest oil processing facility that knocked out about 5% of daily world output.

But technicals could force a different narrative too.

For instance, while the abrupt reversal in WTI is worrisome, “technical support with potential of thwarting the ongoing selloff is plentiful,” wrote Rich Dvorak.

“Most notable is the $55.75 price level highlighted by the Nov. 8 intraday swing low.”

“Slightly beneath this area is the zone of confluence underpinned by the 38.2% Fibonacci retracement of crude oil’s trading range since the Oct. 3 low, which may also keep the price of crude oil afloat.”

However, Dvorak added that below that area, selling pressure had the potential to accelerate quickly and target the $54 handle.