Will Oil Markets Finally Be On The Side Of The New Saudi Minister?

If Ali Al-Naimi, Saudi Arabia’s legendary two-decade long energy minister, were to place a call today to Khalid Al-Falih, the man who replaced him back in 2016, he’d probably tell him:

“Tough luck, mate. You tried, but the market just wasn’t on your side.”

Falih was abruptly dropped on Sunday as energy minister just over three years into the job, after being unable to deliver the same thing that eluded Naimi toward the end of his career: the high prices critical for funding Saudi Arabia, which despite attempts to restructure, remains a nation extremely dependent on its oil.

While they may be a generation apart, Naimi, who just turned 84, and Falih, who remains under 60, had similar career paths.

Both were educated at renowned U.S. schools—Naimi attended Stanford, Columbia and Harvard, and Falih went to Texas A&M. Both began at Saudi state oil company Aramco (Naimi, in fact, joined in 1947, as an “office boy”, when he was just 12), rising through the ranks to occupy the highest office in the world’s oil industry.

Along the way, they displayed starkly different personalities.

Naimi had an iron-will to do things his way—a trait best characterized by his decision to keep Saudi oil production roaring amid plunging prices to try and kill off America’s least profitable but most prolific shale drillers.

Falih Did The Job …

Falih was essentially a yes-man who did the market bidding of his boss, Mohammed bin Salman—Saudi Arabia’s powerful Crown Prince, often referred to by his initials, MbS, and described as the “real power” behind the throne of his father, King Salman.

Some were, therefore, surprised to learn that despite his loyalty to MbS, Falih was removed in the early hours of September 8 through a royal decree issued in Riyadh by King Salman. Others had seen it coming—just a week earlier, Falih had also been replaced as the head of Aramco, a position he held jointly with his ministerial portfolio. The king announced the new energy minister as Prince Abdulaziz bin Salman, another of his sons and an elder brother to MbS.

If there was a reason to be surprised by Falih’s dismissal, it was because as long as he was on the job, he appeared to do whatever was possible under the circumstances to turn the market in favor of the Saudis and the OPEC cartel led by the kingdom.

Sometimes he won. And sometimes he lost spectacularly, as he battled a market that became increasingly volatile and challenging with Naimi’s departure.

The moment he came on, Falih reversed the produce-at-will course set by his predecessor, sealing the first of two output cutting pacts between OPEC and key allies led by Russia. The second iteration of that agreement, a commitment hatched in December to cull 1.2 million barrels per day until the market rebalances, remains in effect till today.

Still, in the numbers game, Falih may have under-delivered. The price of , the international benchmark for oil, went from just under $50 per barrel in March 2016—when Falih took office—to above $62 this week. While that’s a near 25% jump over three years, it’s still well below the $80 per barrel often cited as what the Saudis need for funding their budget. 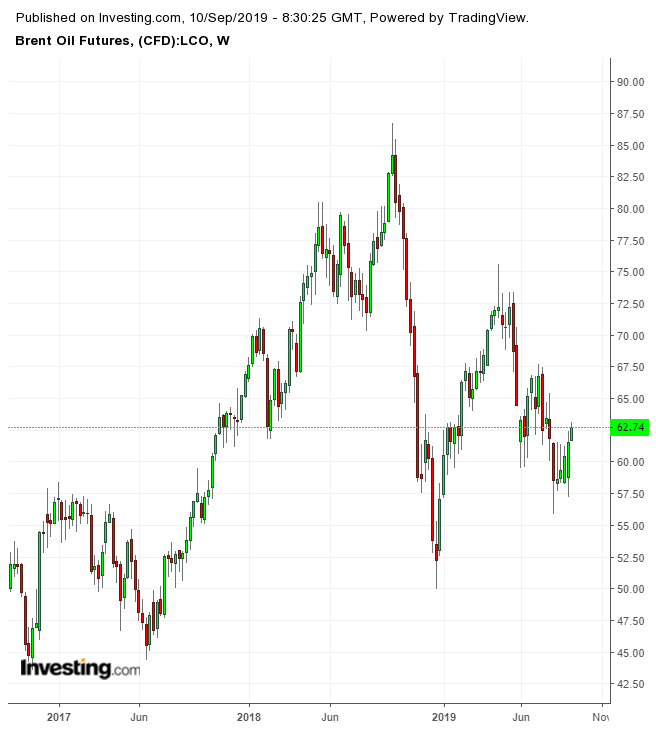 “It’s like in baseball. We know that the team that loses games all year round is really a terrible team. But it’s the manager that gets fired, because you can’t fire the whole team.”

Whatever Falih may have done for market rebalancing, it was Prince Abdulaziz who was credited on Monday with helping to negotiate the current so-called OPEC+ agreement between the cartel and its key allies, including Russia. Traders also took note that he had been in office since 1995 as deputy oil minister.

The new energy minister—referred to by the market as AbS, in the same cryptic manner as his brother MbS—announced that the pillars of Saudi policy would not change and that the OPEC+ deal would survive.

And endorsements were ringing in straight away. Phil Flynn, an oil bull and analyst at Chicago’s Price Futures Group, told CNBC that AbS is “bullish for oil prices.” He added:

“Prince Abdulaziz bin Salman is known as an oil production cutter. He has been instrumental in securing production cuts in the past.”

The AbS-euphoria helped oil prices hit six-week highs in early Asian trading on Tuesday, extending Monday’s 2% rally, as Brent traded closer to $63 per barrel and the U.S. benchmark WTI above $58.

Given AbS’ long service as a Saudi delegate to OPEC and work behind the scenes in helping secure production pacts, his contribution to further market tightening may be par for the course. It will certainly help in taming OPEC’s first production overrun in months, after Iraq pumped a new record-high average of 4.88 million barrels a day in August, well above its agreed ceiling under the OPEC+ deal.

AbS’ Brand Will Be Proven By Market And Aramco Listing

But beyond the OPEC Joint Ministerial Monitoring Committee (JMMC) meeting on Thursday and expectations of rate cuts by the this week and next, it remains to be seen if the AbS brand itself will be bullish for oil.

Global investors will also be closely watching how the two Salman brothers handle the listing of Aramco, a process that began before the end of Naimi’s tenure and has now gone beyond that of Falih.

Saudi Arabia plans to list 1% of the Aramco equity on the Riyadh stock exchange before the end of 2019 and another 1% in 2020, Reuters reported on Monday, quoting sources familiar with the matter. That’s a radical change from earlier listing plans that had reportedly targeted the New York or London stock exchanges.

“Had Falih stuck around, he would have taken further blame for his purported role in delaying the listing. Now, it’s totally on the royal family. It’s their baby.”