Will Gold Survive Another Moderna-Like Shot?

Once bitten, twice shy is the saying. In gold’s case, it appears that once pricked, it’s twice as strong.

A week ago, gold was on the mat, knocked out by Pfizer’s COVID-19 vaccine that sapped almost 5% or $100 from the yellow metal—the most in a single day since August.

Gold took another sucker punch, this time from Moderna’s on its coronavirus vaccine. But far from the knockout blow, this one landed gold on the ropes. After a moment, it was back on its feet, stung but not out. 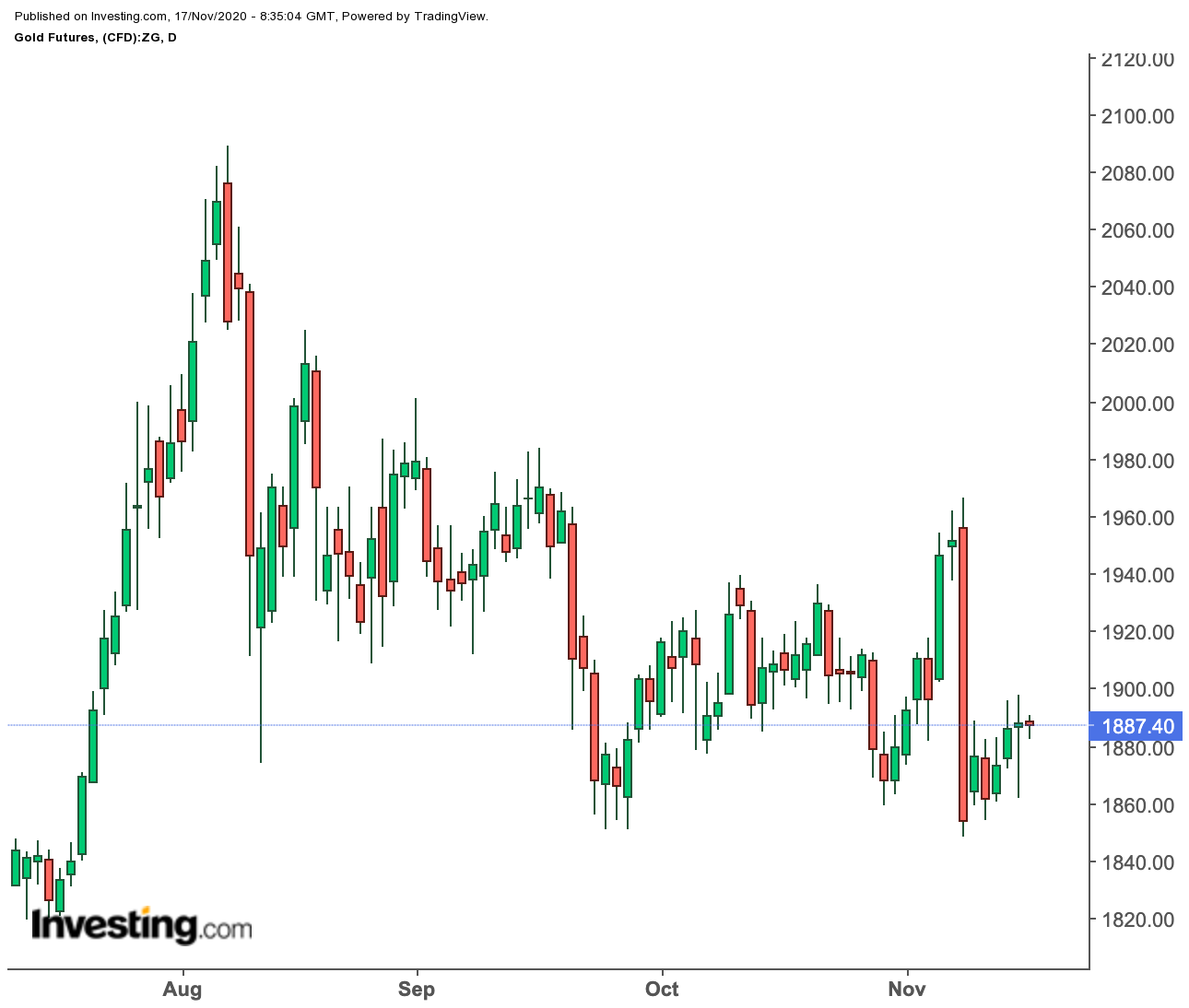 Question: Has gold gotten past the scare of the COVID-19 jabs—which are as much a safeguard against the virus as they are an antithesis to a rally in the yellow metal?

“After the trauma of the post-Pfizer price action, gold has now held its ascending trendline support three times over the past week. It suggests the momentum has now swung to the topside, especially with more easing from the Federal Reserve almost certain.”

Gold On A ‘Lucky Break’?

Halley noted that bullion did not slip beneath the $1864.50 support on Monday. For good measure, he remarked that Monday’s finish of $1888.80 for the spot price was “as lucky a number in Asia as you are ever likely to see.”

“All the more impressive was that gold rallied even as the US yield curve steepened,” he added, referring to the U.S. note.

For context, Moderna said its experimental vaccine was 94.5% effective in preventing COVID-19, versus Pfizer’s 90% efficacy. The Moderna product also needs just regular refrigeration versus the -90 Farenheit needed for Pfizer’s vaccine.

With gold taking the latest vaccine development in stride, Halley has a topside target of $1905-$1907 for bulion, matching the 50 and 100-Day Moving Averages, respectively.

Still, he is loath to say gold is a one-way bet,  “unless it survives something like a Trump-tweet surprise that torpedoes equity markets violently”.

“One caveat to the bullish outlook is that gold has yet to de-correlate itself from aggressive equity market selloffs.”

He added in a blog posted on FX Empire:

“The fact that the indicator is sitting at the $1900 level suggests that the market is trying to see whether or not it can break above there. Ultimately though, we had that nasty red candlestick from last week that could continue to show signs of negativity, and typically do not have those types of candlesticks without some kind of continuation.”

“Furthermore, the $1800 level underneath would be the best place to be a buyer from what I see, due to the fact that it was the scene of a major breakout and of course the 200-day EMA is sitting there. All things being equal, this is an opportunity to pick up gold at a massive support level, but I also recognize that the market is going to be highly sensitive to the U.S. index as well, as we have had a massive negative correlation.”

Ultimately, it may be a matter of time before gold goes higher, said Lewis, though more choppy and difficult trading conditions might come first.

“Therefore you probably need to look to the daily supportive candlestick before putting some type of money to work. Right now, we do not quite have that, but it is starting to stabilize a bit which is a good sign.”

Sunil Kumar Dixit of SK Dixit Charting in Kolkata, India, says gold has been holding support at $1,890 and so long as this prevails, the $1901 target was a possibility.

“Extended sell off can mark the much anticipated bottom of $1,768 which coincides with the 50-week Exponential Moving Average.”

Goldman Says On Course With Its $2,300 Target

In a report published Friday, the investment bank said its outlook for gold was premised on the global economy returning to balance between positive news of potential vaccines for the COVID-19 and the still prevalent risks of further economic damage from more waves of the virus.

On my end, I find bullion still a “Sell” in the near-term, using Investing.com’s Daily Technical Indicator. Based on this projection, I envisage a three-tier support, which begins at $1,869.07 and progresses downward to $1,849.60, before final buying support that emerges at $1,834.46.

Should spot gold buck that call and turn upward, then it will likely find a three-tier near-term resistance instead that begins at $1903.68 and progresses to $1,918.82, before selling pressure that emerges after $1,938.28.

As with all projections, I urge you to follow the calls but temper them with fundamentals—and moderation—whenever possible.