Typically, news of central banks synchronizing rate cuts should be great news for gold longs. But in the coronavirus era, risk trades might go up too, squirreling away money that might otherwise be headed for the yellow metal into things like stocks.

A week ago, I wrote asking what it’ll take for gold to reach $1,700. With the Federal Reserve, Bank of England and Bank of Japan all looking poised to coordinate response to the coronavirus, we may already have the answer.

Yet, the move in and over the past three sessions might not be too assuring for anyone expecting a big pay day from the safe-haven. 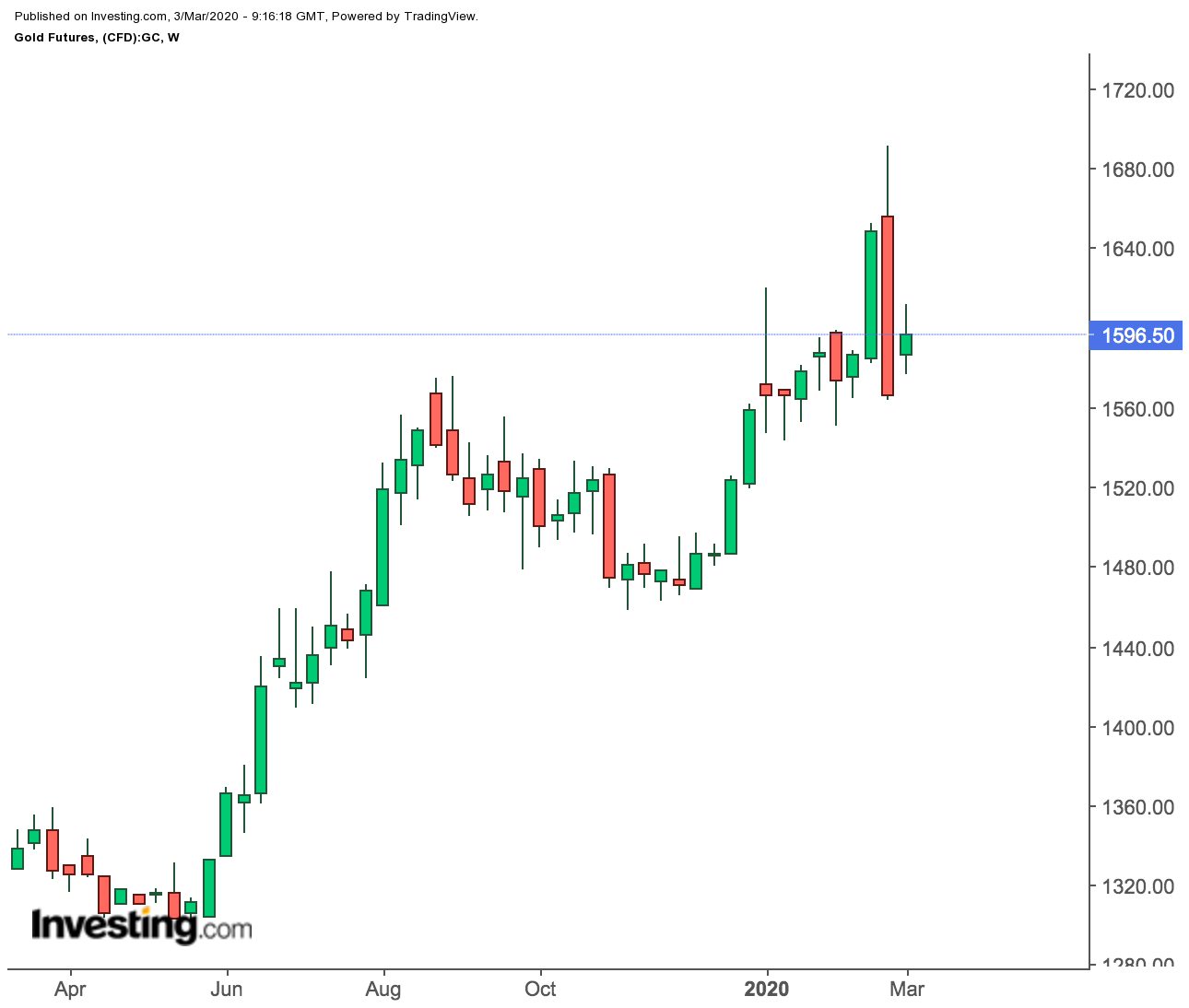 Gold futures for April delivery on New York’s COMEX tumbled 3.5% on Friday as higher margin calls shook many longs out of the trade. Selling by hedge funds to cover losses elsewhere also took the wind out of the sails of gold, which hit seven-year highs just short of $1,700 prior to that.

As the new week opened, the yellow metal bounced back on Monday, rising 1.8% as the risk-on mood across markets proved to be the tide that lifted all boats, including gold.

By Tuesday’s trade, however, the advance was pretty muted. Futures were up 0.1% mid-afternoon in Singapore while bullion did slightly better, with a 0.4% rise.

“After last week’s big falls, more pain could be on the way for gold bulls than gains this week,” explains Fawad Razaqzada, founder of London-based commodities risk advisory Tradingcandles.com.

“While I still remain bullish on gold in the long term, I now think prices may go on to correct themselves for a while before starting to push higher again,” Razaqzada added. 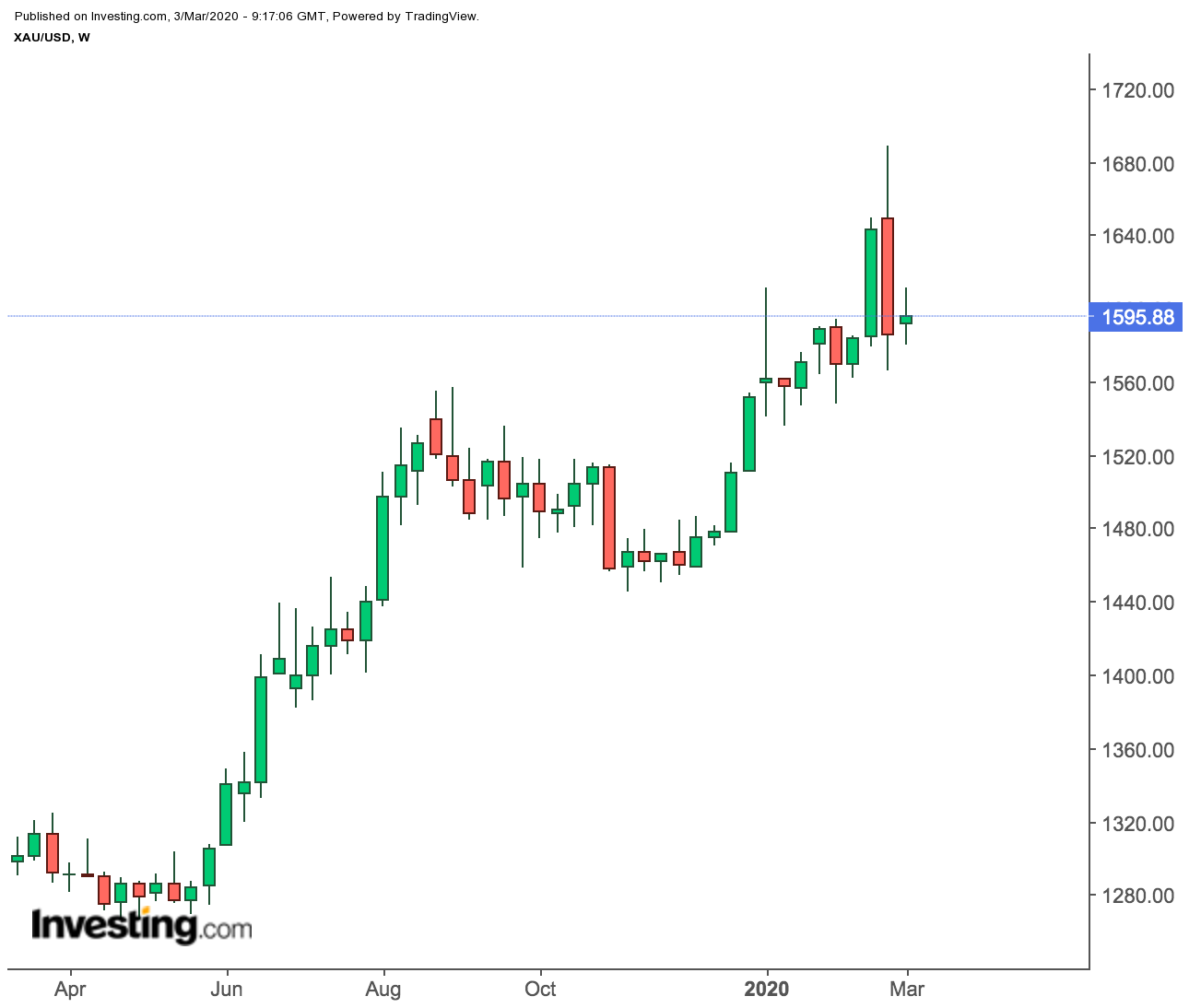 One reason for the anemic gains — even losses — in gold would be the propensity for risk trades to rise again, particularly U.S. stocks, which suffered a 16% loss last week, their worst since the financial crisis.

To prove that theory right, Wall Street came roaring back on Monday, closing up 5% on the intervention planned by global central banks in fighting the coronavirus.

Fed funds futures are pricing in a 100% chance that the Federal Reserve will by 50 basis points at its March 18 meeting, Investing.com’s Fed Rate Monitor Tool shows.

The Bank of Japan and Bank of England haven’t indicated what they will do yet. The Group of Seven finance ministers is, meanwhile, scheduled to hold a teleconference this week to coordinate the response to the viral outbreak.

Theoretically, lower rates are good for gold as they could help the yellow metal attract investors looking for yields away from the .

But with many investors still raring for a return of the record highs seen on Wall Street over the past few months, the competition for fund flows might be stiff — unless the coronavirus crisis gets significantly worse, battering equities again.

“Last week’s sell-off helped to create a bearish engulfing candle on the weekly time frame, suggesting the bears are now in control of price action” in gold, said Razaqzada.

“If I am reading this correctly, then gold bulls are the trapped group of investors. If so, their stops will be resting below last week’s low at $1,563. That’s where I think gold is headed in the short-term.”

Since that $1,563 bottom, gold strayed above $1,600 on Monday before settling under that level, but up. Similar action was unfolding in Asian trade on Tuesday, ahead of the New York session.

On a technical basis, Investing.com has a “Neutral” recommendation for gold, projecting strongest support at $1,540.90, versus stiffest resistance at $1,648.30.

Despite the somewhat dubious near-term outlook, some are resolute in their support for gold, which is still up about 5% on the year.

By Wendt’s logic, gold’s retreat last week “was nowhere as bad as the 10%-plus drubbing equity markets took, so it can be argued gold has passed its safe-haven challenge.”

George Gero, who oversees the precious metals portfolio for RBC Wealth Management in New York, shares the view that gold will go higher but volatility is the order of the day for now.

“Many are treating gold as a trading vehicle looking at stocks,” Gero said.

“However, many haven-buyers continue to want to add to positions at lower prices for longer term holdings.”