Will Gold Reach For The Stars, Or Just Hit The Tree Tops?

The ECB has finally to a record low of minus 0.5%. And the Fed gets its , along with a host of other central banks, including Japan’s. The question is, what will gold do?

Compared to its scintillating run between May and August, gold’s performance in recent days has been nothing short of anemic.

Even after the European Central Bank’s return to quantitative easing on Thursday, the yellow metal barely settled higher. The only consolation is that it got a huge pop early in the day that vanished on profit-taking before the close.

How High Will Gold Go; How Long Will It Last At Those Peaks?

All this makes gold’s next breakout hard to predict—from how high it will go, to how long the run-up will last.

So, to reprise the question: What will gold longs do if the Federal Reserve cuts rates on Sept 18, as widely expected, even if for a nominal 25 basis points?

And what if that action is followed through by a rash of easing by the central banks of , and , all of which have policy decisions on Sept 19, just a day after the Fed’s?

Will gold longs reach for the stars then? Or will they be content to just land on the tree tops?

There are two schools of thought on the direction for the world’s favorite safe haven.

One is that the gold rally has reached exhaustion point, meaning there will be fewer of the kind of outsize gains seen over the past four months. Even if there are, those advances are likely to be returned quickly.

The other is that longs in the precious metal are virtually unstoppable, and could, if the stars align, rewrite the 2011 record high of above $1,900 per ounce. 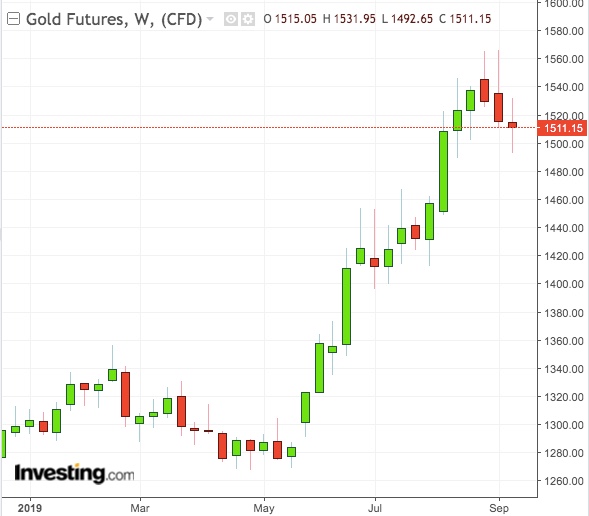 Canadian banking group RBC belongs to the first school of thought, forecasting on Thursday a modest assumption of $1,500 for the remainder of 2019 and 2020. It’s previous call was $1,350.

While the Fed’s expected action will be the underlying driver for $1,500 gold, RBC said the precious metal

“at this point … appears to be pricing in a no-successful completion for a U.S.-China free trade agreement before year-end”.

“We expect a seasonal rally in the gold price in the December – January period.”

RBC did not explain its restrained outlook.

The group said in a note:

The ECB’s “notion of QE infinity, until inflation ‘converges’ to 2%, represents a dovish tilt … and will continue to see rates moving lower amid reach for yield, ultimately supporting gold.”

But it also said that President Donald Trump’s relentless push for the Fed to outdo its peers in cutting rates was unlikely to see corresponding action. Earlier this week, Trump called officials at the U.S. central bank “boneheads” for their tame rate cuts and praised the ECB on Thursday for “acting quickly” while the Fed “sits, sits and sits”.

Meanwhile, Wall Street’s investment bank Citigroup (NYSE:) belongs to the school of thought that expects gold to reach for the stars.

Gold could hit historic highs and even break $2,000 per ounce in the next couple of years if recession risks and rate cuts continue, analysts at Citi said in a Tuesday note.

“We find it reasonable to consider an increasing probability that bullion markets can retest the 2011 to 2013 nominal price peaks and trade to $1,800-2,000 per ounce by 2021 and 2022, on the back of a U.S. business cycle turn towards slower growth/recession on top of election uncertainty.”

Trump to have dinner with parents of ...