Platinum is a rare precious, and industrial metal. The vast majority of annual production comes from South Africa and Russia. In South Africa, production is primary, with mining companies extracting from deep in the earth’s crust. In Russia, platinum output is mostly a byproduct of production.

Platinum has a long history as a precious metal that is a store of value. For decades, platinum’s nickname was “rich person’s gold.” Meanwhile, platinum’s density and resistance to heat make it a critical industrial metal that cleanses toxins from the environment.

Platinum and platinum group metals ( and ) are required in catalysts in automobiles, oil and petrochemical refineries, and other emission-producing areas. Platinum is also used in fiberglass manufacturing and jewelry; it even has pharmaceutical applications in chemotherapy drugs.

Over the past years, platinum lagged the other precious metals. However, in 2021, the price broke above the critical technical resistance level at the August 2016, $1199.50 high.

In 2020, platinum had declined to a low of $562 per ounce in mid-March as the global pandemic caused risk-off selling in markets across all asset classes. Last year, platinum fell to its lowest price in eighteen years. But in 2021, it traded to a six-and-one-half year high.

Years as a precious metals laggard

Platinum has been historically inexpensive compared to , palladium, and rhodium over the past years. 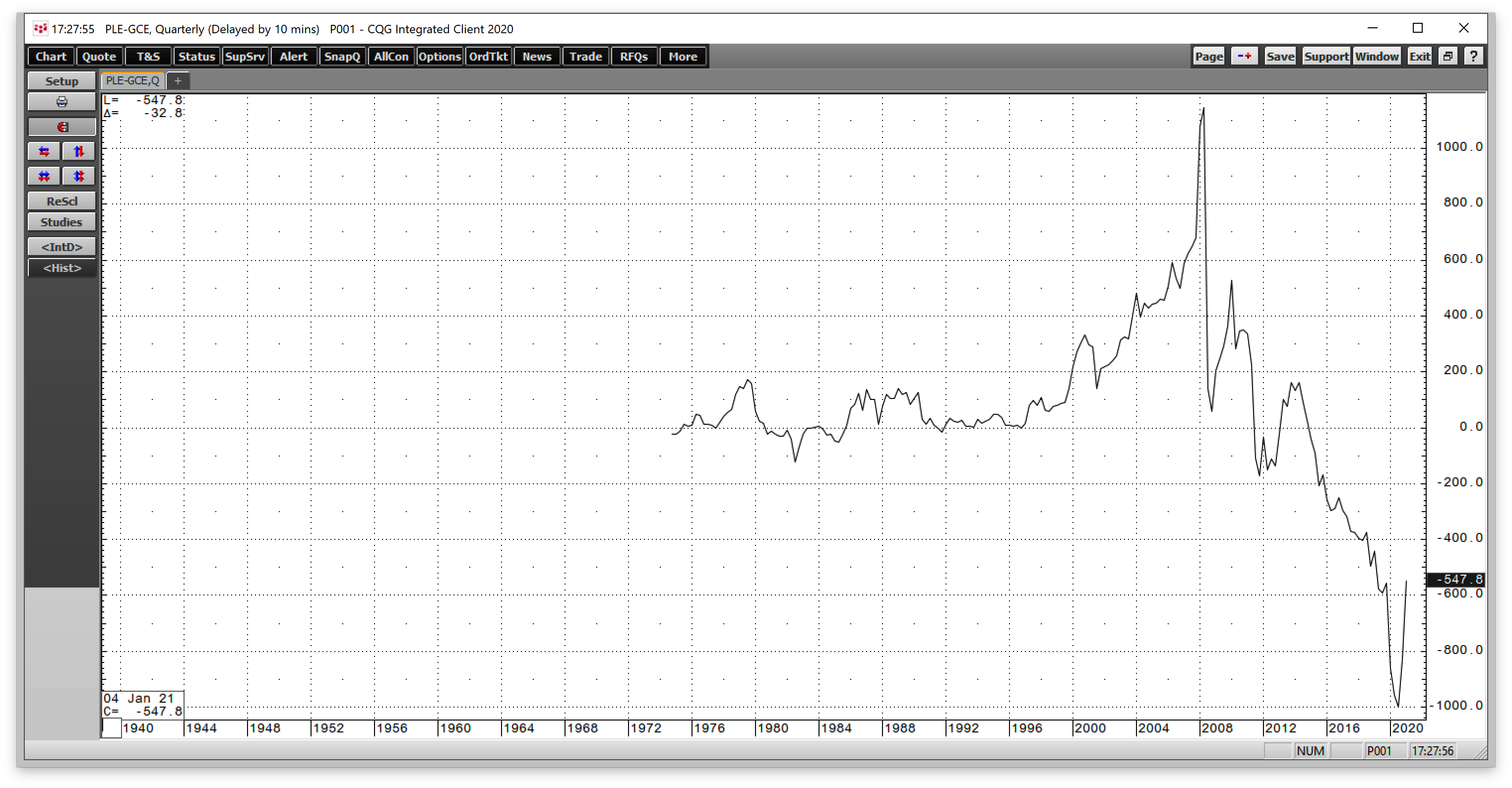 The quarterly chart of platinum minus gold shows that before 2015, platinum had not traded below a $200 discount to gold since trading on the futures exchange began in the 1970s. In 2020, it fell to an over $1000 per ounce discount to the yellow metal. 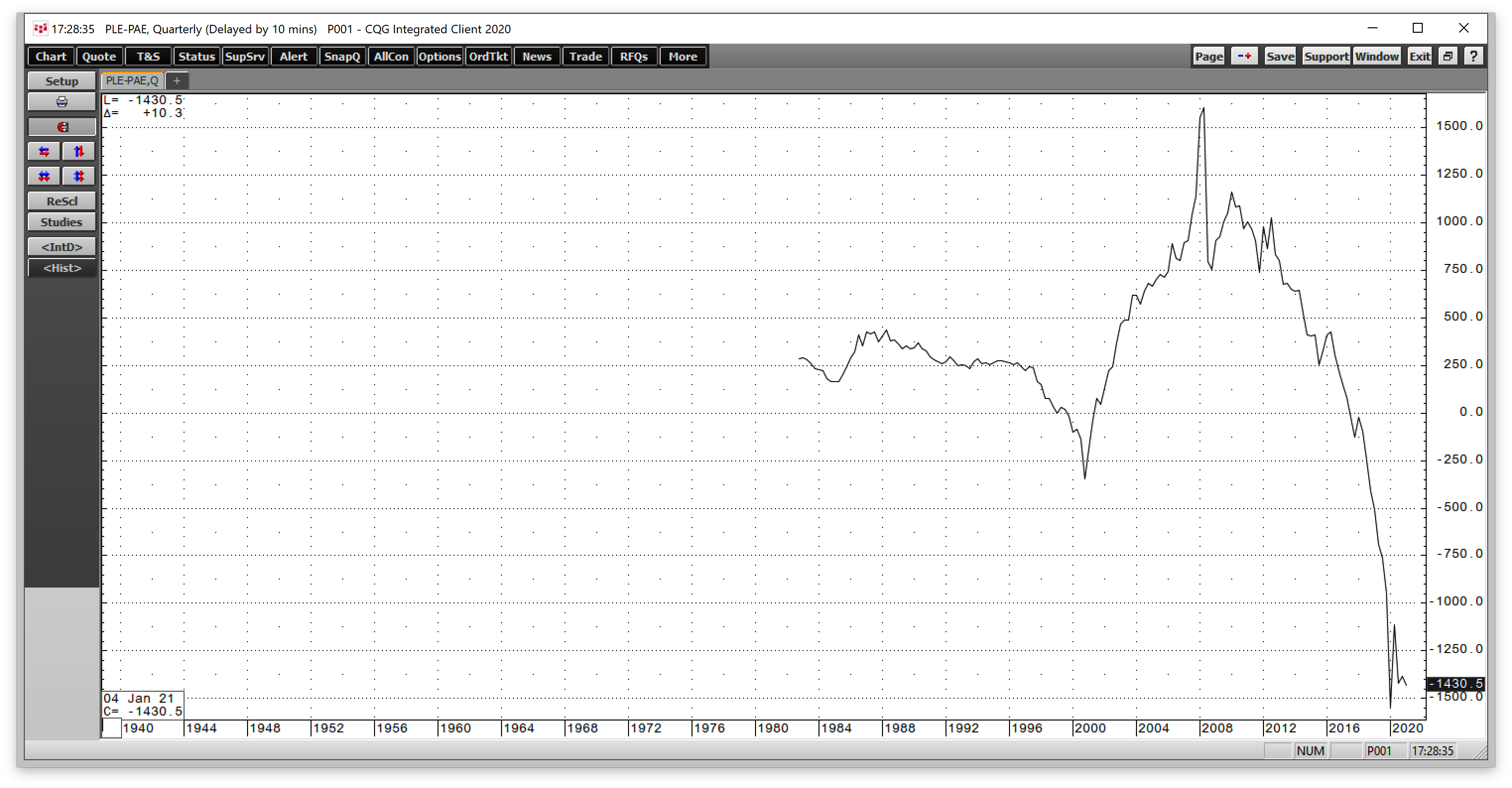 Rhodium is another PGM that only trades in the physical market. In 2016, platinum fell to a low of $812.20, and rhodium found a bottom at $575 per ounce. With platinum at the $1200 level at the end of last week, the premium for rhodium has been mind-blowing. 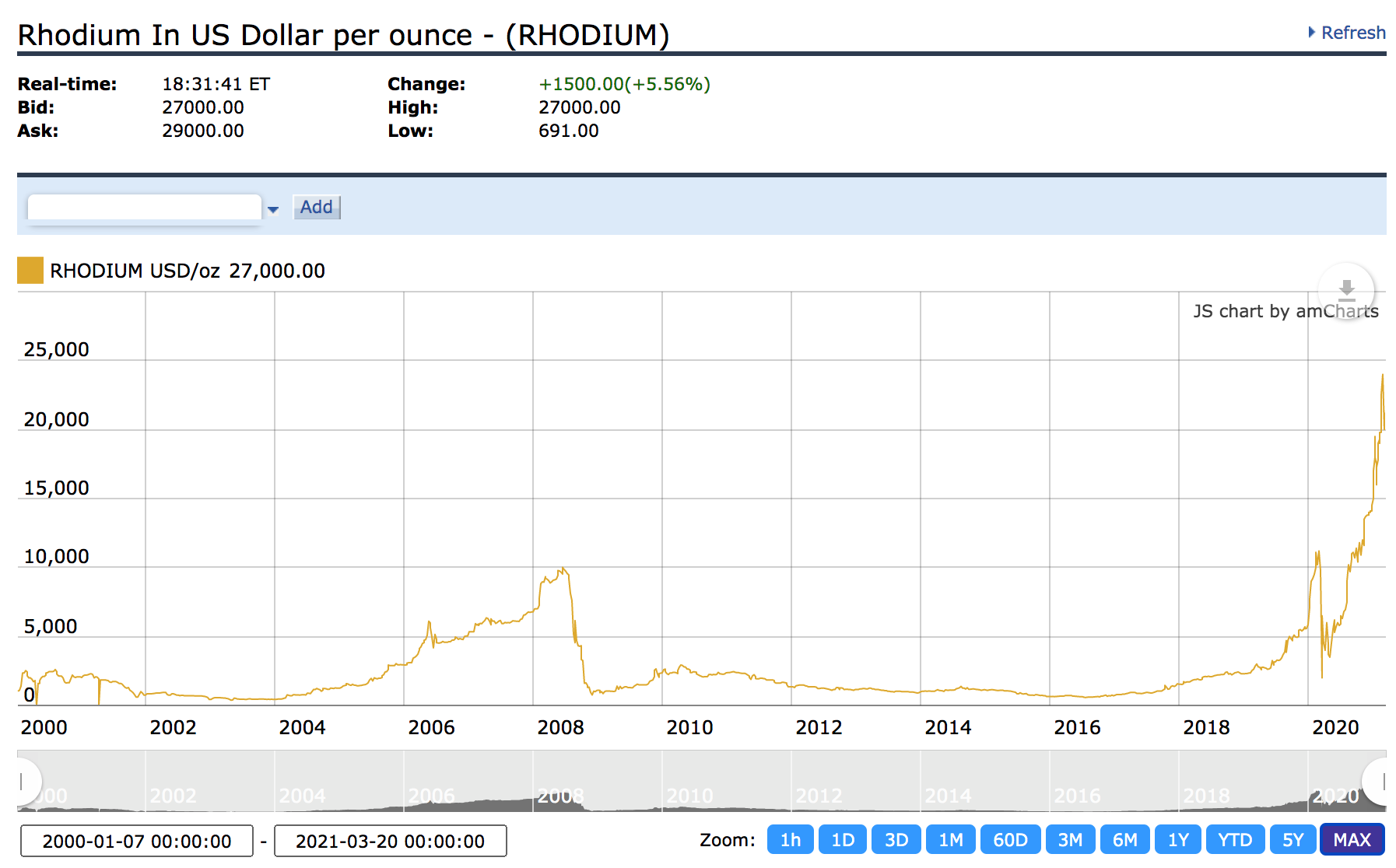 The chart above shows that with rhodium at a $28,000 midpoint on Mar. 19, it was at a nearly $26,800 per ounce premium to platinum. Ironically, rhodium is a byproduct of South African platinum output. The depressed platinum market over the past years led to lower production, which created a deficit in the rhodium market.

The bottom line is that platinum has been a laggard compared to gold and the other PGMs over the past years, but that could be changing.

Technical break to the upside, but volatile trading around $1200 pivot point

Platinum reached an all-time high of $2308.80 per ounce on the nearby NYMEX futures contract in 2008. Over the next twelve years, the price made lower highs and lower lows, culminating in a spike to the lowest price since 2002 in 2020 when platinum hit bottom at $562 per ounce.

The monthly chart illustrates that platinum made a lower high in August 2016 at $1199.50, which stood as critical technical resistance for over four years. In February 2021, platinum finally broke above the technical level, reaching a high of $1348.20 on the nearby futures contract. At the $1200.10 level on Mar. 19, platinum was just above the breakout level, which now stands as a pivot point for the precious metal.

After falling with the platinum price in March 2020, the total number of open long and short positions in the platinum futures arena has been rising with the price over the past year. The increase in open interest is a sign that investment and industrial demand are returning to the platinum market after being washed out during the March 2020 spike low.

Meanwhile, monthly price momentum and relative strength indicators have been trending higher in confirmation of the bullish price action.

The quarterly chart shows that platinum posted gains over the past three straight quarters. A close above $1073.20 on Mar. 31 would mark the commodity’s fourth quarterly gain.

Platinum continues to have the most attractive value proposition in the precious metals sector for the following reasons:

Platinum has a lot going for it at the $1200 per ounce level on Mar. 19. When it decides to move higher, the market’s liquidity could be the factor that causes an explosive gain.

Liquidity is an issue

One of the reasons platinum fell to an eighteen-year low in 2020 was that liquidity disappeared, causing the metal’s price to become a falling knife. Illiquid markets tend to move to irrational, unreasonable, and illogical levels on the downside during liquidations and to the upside during bull markets.

Platinum’s total open interest in the futures market stood at 74,419 contracts at the end of last week. On Feb. 16, when the April futures rose to the $1348.20 high, total volume was at 39,828 contracts, the high of the year. Since a platinum contract contains 50 ounces of the precious metal, the volume changing hands on Feb. 16 was 1,991,400 ounces. The current open interest represents 3,720,950 ounces of platinum.

The gold market is highly liquid, while platinum is not. Therefore, the experience in 2020 that drove the price to an irrational low could repeat on the upside. Buying evaporated last year. When platinum decides to play catch up with the other precious metals, selling could disappear, causing the price to vacuum higher.

The most direct route for a risk position in platinum is via the physical market for bars and coins. The futures market offers a delivery mechanism that allows for a smooth convergence of physical and futures prices when contracts expire. Meanwhile, the Aberdeen Standard Physical Platinum Shares ETF product (PPLT) is the most liquid ETF that tracks the price of platinum. 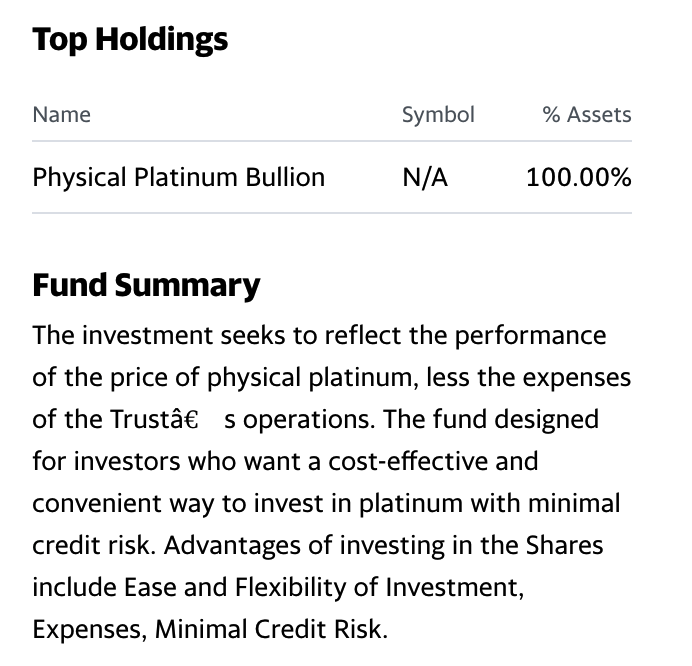 PPLT holds all of its $1.536 billion in net assets in physical platinum bullion. The ETF trades an average of 252,450 shares each day and charges a 0.60% expense ratio. 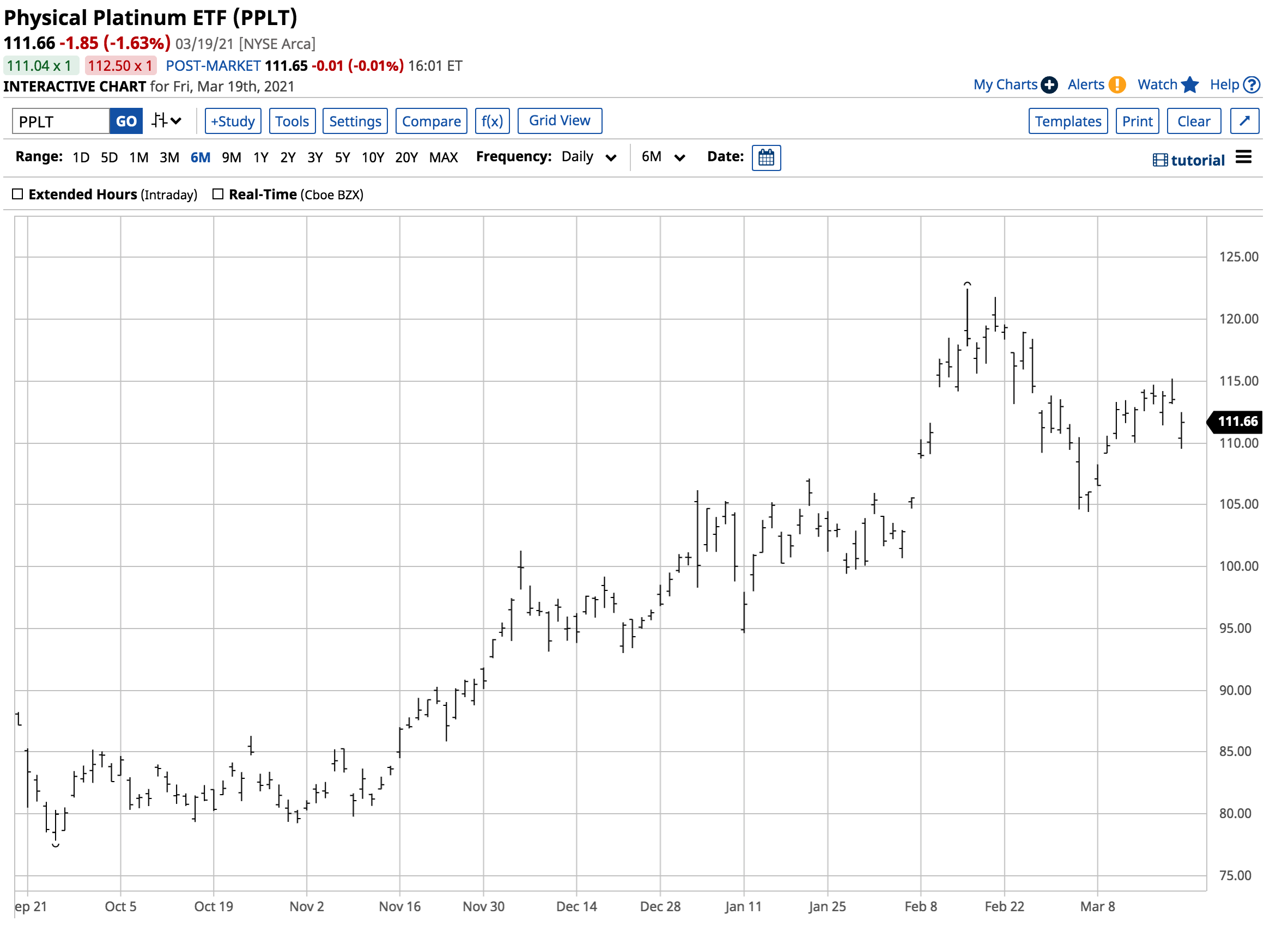 Over around the same period, PPLT rose from $104.41 to $115.19 per share or 10.3%. The drawback of the PPLT ETF product is that it only trades during the hours when the US stock market operates, while platinum trades around the clock from Sunday night until late Friday. When highs or lows occur during periods when the US stock market is not open, PPLT misses those moves.

Platinum remains inexpensive compared to peers in the precious metals group. Its role as a store of value and industrial metal make it a compelling value at $1200 per ounce.

Moreover, liquidity in the platinum futures market could lead to explosive gains if selling evaporates and a herd of buyers decides that it’s platinum’s time to shine.