Why For Oil And OPEC, Next Week’s Monitoring Committee Meeting Is Critical

As oil markets climbed higher on Wednesday, OPEC oil ministries are preparing to gather in Abu Dhabi, UAE next Thursday, 12 September for a meeting of the Joint Ministerial Monitoring Committee (JMMC). At the conclave, a select group of OPEC members will discuss the cartel’s compliance with the oil production quotas that they rolled over in early July.

Even though OPEC’s total oil production increased by about 80,000 bpd in August, traders can expect that the JMMC will announce better-than-planned compliance overall. The 80,000 bpd increase is largely due to production increases from the usual overproducers—Nigeria and Iraq. A decline of 50,000 bpd from Iran helped ensure that the increase was not greater. JMMC leaders may mildly rebuke the two countries, but the group is much more likely to focus its message on OPEC’s significant, overall over-compliance with its production quotas.

However, the big problem for OPEC, and for its current partners such as Russia, is that they have been unable to raise prices in the last year. Even stabilizing oil prices seems out of their reach. 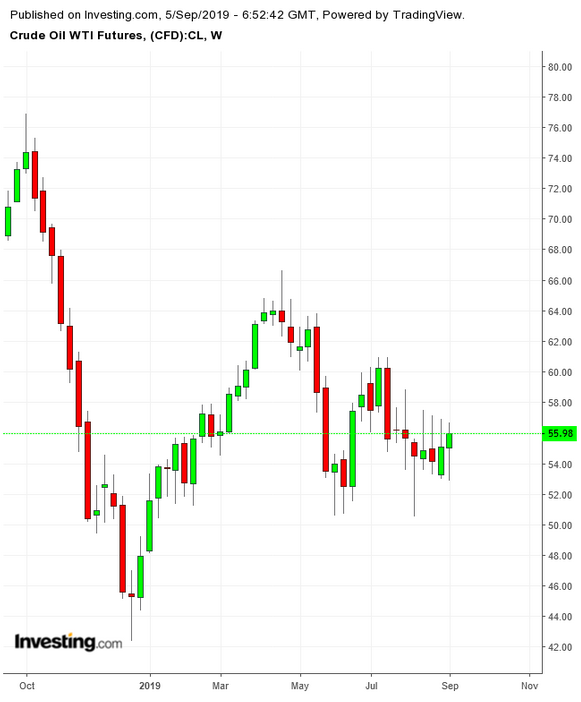 Instead, oil prices are being driven largely by overwhelming fears of a global economic slowdown and the related trade war between the United States and China. OPEC is not the driver of prices that it was in the past. In fact, oil prices rose yesterday largely because of mildly positive economic and political news out of China.

Next week’s JMMC meeting will be important largely because of Russia and Saudi Arabia. Russian adherence to the production deal is always tenuous. If Russia’s commitment to the production quotas falters, OPEC itself could be in disarray.

Russian oil minister Alexander Novak said last week that Russia overproduced on its quotas in August, but he promised that Russia would do better in September. Technically, the current OPEC / non-OPEC deal and production quotas are in place through March 2020, but the agreement will be worthless without at least a semblance of Russian compliance.

Saudi Arabia’s extra production cuts have also been a significant factor in the group’s bullish compliance numbers. The Desert Kingdom has committed to maintaining these extra cuts and export limits through September, but traders will be looking to Saudi Arabia’s oil minister, Khalid al Falih, to provide more guidance about the Kingdom’s production and export targets in October and November.

Summer is coming to an end, and with it the extremely hot temperatures that require Saudi Arabia to increase production of oil and associated natural for domestic power usage. If oil demand projections for the rest of 2019 look weak and global economic forecasts are discouraging, the pressure will be on Saudi Arabia to cut its own production in an attempt to push prices higher. But it would be a mistake to expect more production or export cuts from Saudi Arabia.

The JMMC may examine global oil demand forecasts and global economic forecasts and lean on Saudi Arabia to decrease its own production to help lift oil prices. However, the JMMC won’t set policy.

But it can—though it does not always—make policy recommendations to the larger group. Traders looking for guidance on OPEC policy through Q1 2020 at this meeting will likely be disappointed. That will come at the regular OPEC and non-OPEC meeting scheduled for early December.

If OPEC reveals that compliance was not as good as we believed, then the negative sentiment will latch onto the bad news and drive prices lower. But in the likely scenario that compliance was good—either the same or better than expected—the market will probably ignore the news. If, on the other hand, OPEC indicates at the JMMC that demand has contracted, the market will definitely drive prices down.