What’s Next For The U.S. Oil Market And Energy Policy?

During the State of the Union address on Tuesday night, President Trump delivered some clues about the potential direction of U.S. energy policy for 2020.

In addition to policy implications, the U.S. oil market will likely be influenced by some major market drivers. The uncertain impact of coronavirus on oil prices and U.S. producers remains a concern. As well, the Phase One trade deal with China leaves lingering questions about the ability of the U.S. to meet the conditions of the agreement.

Below we unpack these key fundamental factors to examine what’s ahead for the U.S. oil market and the country’s energy policy:

The President touted America’s record oil production — currently at an all-time high of about 13 million bpd — and claimed that the United States is energy independent, which resonates with voters, but is not exactly true. While the United States might be the largest oil producer in the world today, oil is a global commodity, and some U.S.-based assets are foreign-owned.

Notably, President Trump’s speech didn’t mention any new initiatives his administration has planned to boost U.S. oil production or spur energy output of any type. In previous speeches, the president has discussed U.S. energy of all kinds (, , , nuclear, etc.) as well as plans to increase production. The shale boom over the last few years can be credited, in part, to friendly policies from the Obama White House and especially the Trump White House.

Perhaps, additional measures will not be prioritized since output is already so elevated after the Trump administration reduced federal regulations for coal, oil and natural gas production.

But Low Prices Could Take A Toll 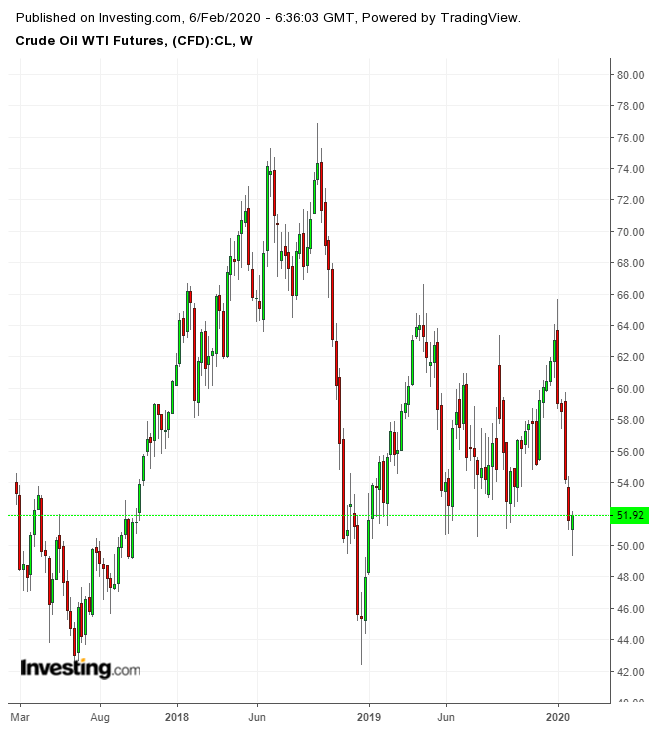 In its 2019 forecast, the EIA predicts that U.S. oil production will continue to rise though 2025, achieving just over 14.2 million bpd before declining slightly. However, a lot can change in five years.

Although we don’t yet know the full impact of the coronavirus on oil demand, it is clear that China’s for 2020 will be stunted by the epidemic and the quarantine.

What isn’t clear: how long oil prices will remain depressed because of the pause in economic activity the virus has caused. Any prolonged period of low prices will take a toll on oil producers.

We could see more shale oil companies going bankrupt if prices fall and stay low, and this, in turn, could impact U.S. oil production numbers

U.S. oil and transportation infrastructure is another issue to watch. According to the Phase One of the U.S.-China trade deal, China has committed to purchasing $52 billion worth of U.S. energy products in 2020 and 2021, including crude oil, liquified natural gas, coal and refined product.

It’s not clear if the U.S. has sufficient export infrastructure to support purchases from China of this level. It may be necessary for the U.S. to greenlight and prioritize some more production and export facilities to be able to complete the orders that are supposed to come.

From the little that President Trump said about energy, the takeaway is that the government is rejoicing over what is happening now and may not be looking for too much more.

Traders and analysts will be seeking answers from Energy Secretary Dan Brouillette and the White House to get a sense of whether they are looking to expand this boom or maintain the status quo.