To soybean traders—and perhaps planters too—Donald Trump might as well have said that 50 billion pies will fall out of the sky for them each year.

Since the U.S. president promised in October that China will buy $50 billion or more of farm products from the United States a year under the phase one of their trade agreement, grain markets’ belief in an imminent deal has turned from hope to prayer and, finally, despair.

So, when Trump announced on Tuesday that a pact with China will likely come after 2020—to deprive Beijing of any advantage it may have in pressuring him for a settlement in its favor before next November’s U.S. presidential election—there was an almost discernible yawn from the agricultural trading community. 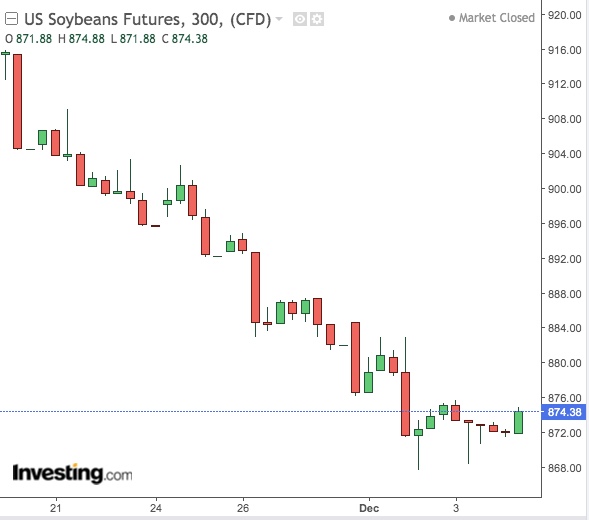 The U.S. soybeans market—poised to be the biggest beneficiary of any China deal—surprisingly closed in the positive, after 10 days in the red, suggesting relief that the trade ballyhoo was finally over and the market could go back to focusing on some “real” fundamentals.

“The trade war rumbles are front and center, but thankfully grain markets appear to be looking beyond that news,” said Dan Hueber, founder of The Hueber Report, a St. Charles, Illinois-based agricultural risk consultancy.

Hueber noted that the delayed China deal wasn’t the only bad news in commodity markets on Tuesday. Less than 24 hours earlier, the Trump administration had also announced tariffs on all steel and aluminum imports from Brazil and Argentina, and threatened up to 100% duties on $2.4 billion of French cheese, champagne and other products.

Soybeans aside, U.S. corn prices also fell modestly on Tuesday. Only wheat got crushed but that was probably due to the fact it had been overbought recently on fears of tight supply, said traders.

“I suspect tariff fatigue is becoming more and more ingrained within the psyche of the trade.”

So, where would U.S. soybeans trade fundamentally if big buyer China is out of the equation—a prospect looking increasingly likely after Dec .15, when the Trump administration and government of President Xi Jinping exchange even more punitive tariffs?

According to Investing.com’s Daily Technical Outlook, Chicago-traded for January delivery remain in a “Strong Sell” position. Yet, there’s potential for the contract to test $8.8336 per bushel in a rebound, versus Tuesday’s settlement of $8.7275.

“The U.S. harvest is entering its final stages now and many producers are putting their soybeans into storage and not selling. This has caused basis levels for soy to firm in the country and at the Gulf of Mexico.”

Scoville concurs with Hueber that the market “is tired of hearing about the potential U.S.-China trade deal, and wants to see the real thing.”

In the case of , Investing.com’s Daily Technical Outlook holds a “Strong Buy” recommendation for the March contract, forecasting a top-end resistance of $3.8820 per bushel versus Tuesday’s settlement of $3.8150.

“While March corn hasn’t broken through key resistance, it continues to flirt with resistance around the $3.83 mark,” said Hueber.

“Indicators have turned higher, and we may close above the 21-day moving average. The path of least resistance should be transitioning to the upside.”

“World wheat prices will still be dictated by what happens in Europe and the Black Sea area, and U.S. prices will most likely remain a follower as the U.S. tries to compete for sales. Chart patterns on daily and weekly charts imply more up pressure on prices this week though.”

“It would come as no surprise to anyone watching the soybean market as of late that speculative funds have been sellers, and as it turned out, they sold a record quantity.”

“While I would not suggest the boat is ready to tip, it is undoubtedly beginning to list to one side.”