With all the manufactured excitement over U.S.-China progress and oil bulls’ fantasy over where could go, it’s a little easy to lose sight sometimes of the commodities that should really be toasted for their performance.

One of them is coffee. 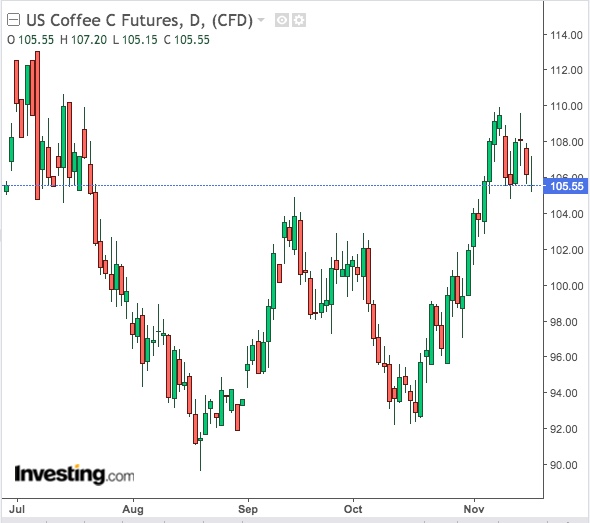 on ICE Futures U.S. is trading not far from four-month highs hit almost two weeks ago—and trade expectations are enough to keep it steaming for a while.

Arabica is up 7% on both the year and the month—in fact the second month in three where it’s risen as much.

At Monday’s settlement of $1.092 for a lb, benchmark arabica for March delivery is just slightly adrift from July highs of $1.099 reached on Nov. 8.

Arabica, Robusta Both On The Uptrend

And it’s not just arabica that’s winning the “softs” crowd—a commodities monicker for the followers of coffee, , and .

on U.K.’s Liffe is also trying to recover from a poor patch through most of this year, rising more than 5% so far in November.

So, what’s brewing with coffee?

In arabica’s case, it’s a dry spell in top grower Brazil, where rain itself has become a bit of a prized commodity.

“Major concerns about drought developing in Brazil have pushed arabica prices off of a 14-year low.”

“If the hot and dry weather conditions persist, I would think prices could touch the contract high hit on July 5 at $1.19. But at this point, the volatility should start to increase as the market can have tremendous price swings daily.”

It also notes that arabica has smashed past most price barriers set in recent days, and is now trading above its 200-Day Moving Average.

Scoville largely concurs with the weather-impact laid out by Seery on arabica:

“The Brazilian crop is developing but some exporters say they are out of previous crop supplies to sell.”

“Reports from Brazil indicate that flowering is off to a very good start. Rains are expected again in coffee areas this week. Overall, the coffee areas remain in a rain deficit but have had some timely rains to start the flowering season.”

As for robusta, he said production had slowed from top grower Vietnam, which appeared to be resisting lowly offers from some buyers.

“The Asian harvest is underway but producers do not seem to be selling on ideas that prices are too low to provide profits. Vietnam exports remain behind a year ago. But the market anticipates bigger offers as producers and traders will need to create new storage space and are expected to do this by selling old crop coffee.”

“Vietnam crops are thought to be big despite some uneven growing conditions this year. A tropical system hit production areas in the last couple of weeks and so far there have been reports of some damage and losses.”

Investing.com’s Daily Technical Outlook rates robusta as a “Strong Buy” from a “Sell” a month ago, predicting a top-end resistance of $1,447.66 for the January contract—a generous climb of $83, or 6%, from current levels.