What Awaits Gold And Oil On Fed Day

Since 2019 began, probably no day has been as important to global markets as today.

What they aren’t so certain about is whether it will be a 25 basis points cut, or more. And whether there will be a succession of cuts in the coming months.

Logic dictates that the bigger or more extended the rate cut(s), the lesser the yield will be on the . And the lesser the incentive for holding cash, the greater the motivation will be for diverting capital into inflationary assets, especially commodities such as and .

The following are potential scenarios for oil and gold based on the FOMC’s announcement:

There’s every possibility it will fall short of the target too, since this is the minimal rate cut traders are expecting anyway.

For a market that may not be ecstatic with what the Fed announces, this could be a tall order.

Unless Powell sounds sufficiently dovish on the road map for rates in his press conference later, gold may have trouble holding on to its gains. 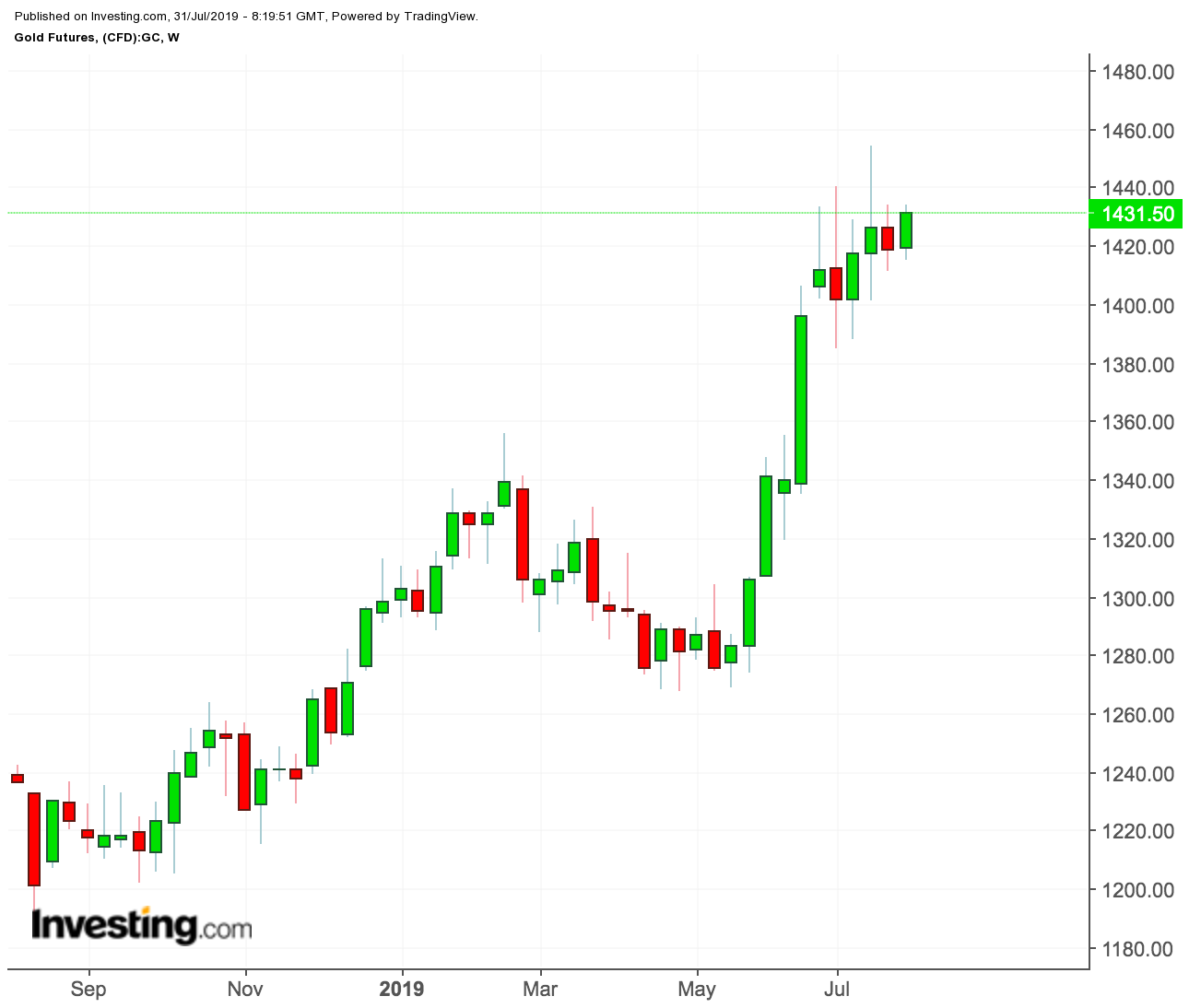 For that reason, the market could reverse course after its run higher, whether or not it hits $1,450. In fact, there’s a greater likelihood for profit-taking by Thursday itself, if gold does rewrite its 2019 highs before or right after the FOMC announcement.

It’s a busier day for oil than gold, with the Energy Information Administration announcing weekly U.S. inventory balances on crude oil, gasoline and distillate at 10:30 AM ET.

If the EIA reports a seventh , as the market expects, then oil bulls could have a lot more firepower than thought.

Against the expectations of bears that had been focused on recent demand worries, crude prices have performed exceedingly well this week in the run-up to the FOMC. 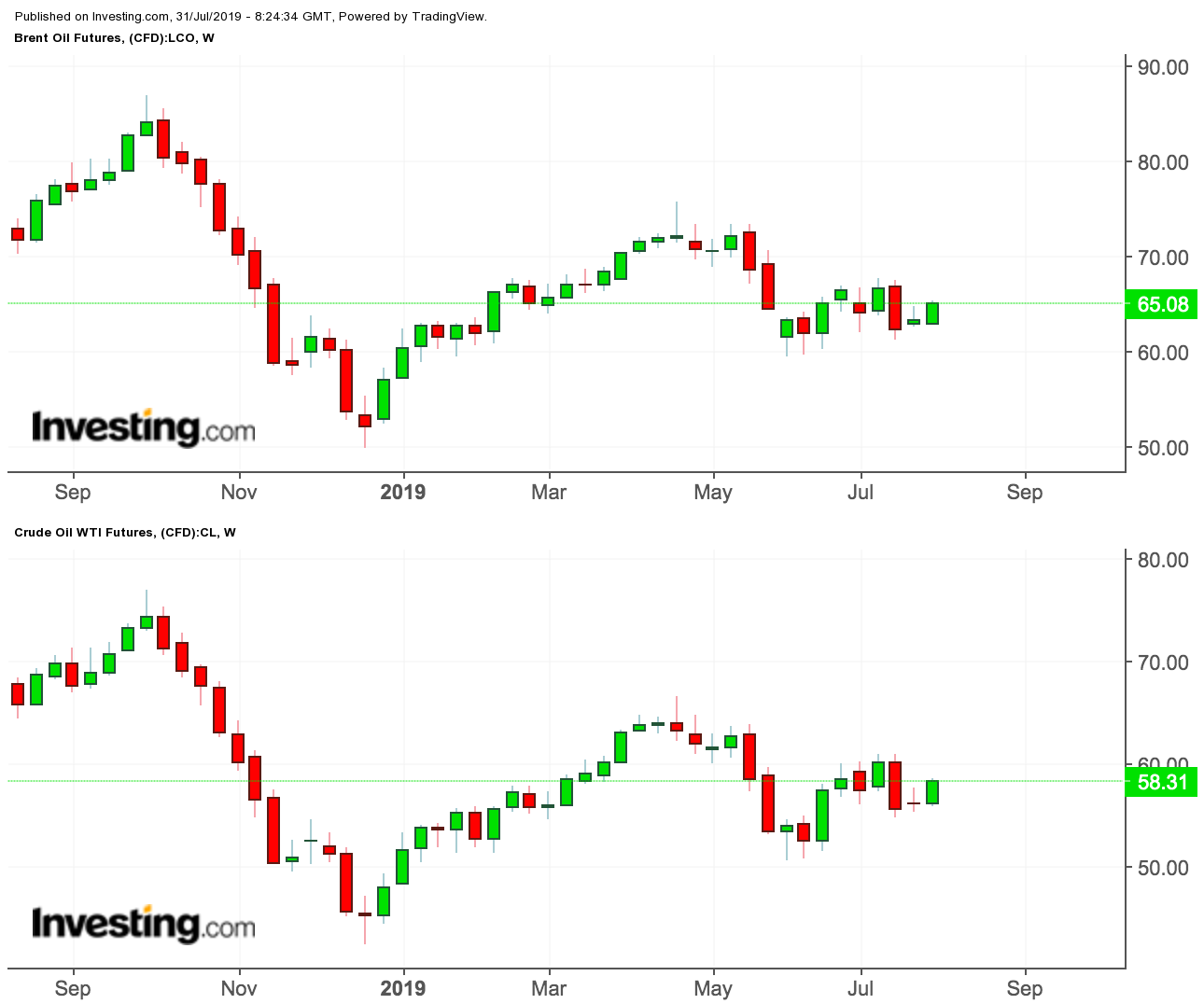 A 25-bp cut could push WTI beyond $60, provided the EIA data is supportive as well. Under similar circumstances, Brent could reach $67 or more.

But like gold, after the initial euphoria of the FOMC announcement, and barring more dovish overtones from Powell, oil could turn direction too, by as early as Thursday.

If so, expect WTI and Brent to retrace much of their weekly gains by Friday’s settlement. As it stands, U.S. crude is set to end July a tad lower at the close of Wednesday’s trade while Brent is on track to a loss of more than 2%.

Both spot and futures should have little trouble setting new 2019 peaks.

On the high-end, the target could be anywhere between $1,460 and $1,480 for both, and the gains could occur over the course of the remainder of the week.

In the near-term, gold at $1,500 will also be very likely, given the dovish environment.

Provided the EIA does not upset the apple cart of oil bulls with its weekly dataset, a 50-bp cut or a rather dovish Powell should easily send WTI past $60 a barrel. And Brent closing in on $68, with a near-term target of $70.

Still, unlike gold, oil has many other impediments to its upside, from erratic Iranian tensions to on-again, off-again U.S.-China trade talks, so crude’s run higher may not be as smooth even with a strong rate cut.