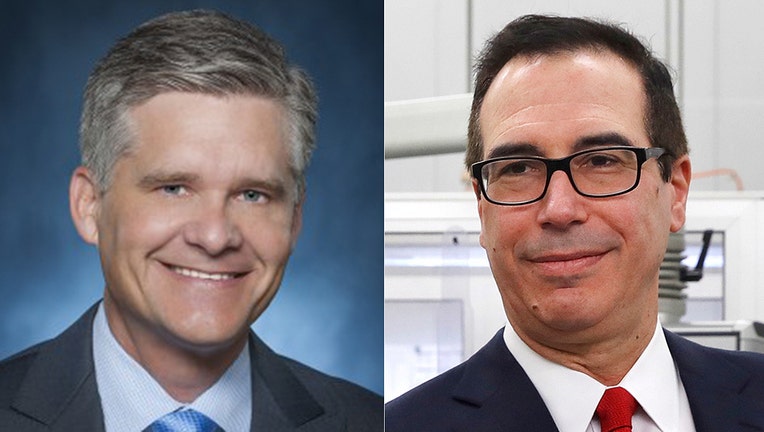 Walmart CFO Brett Biggs [left] and Treasury Secretary Steven Mnuchin spoke about the tariffs on Chinese goods after the CFO said the tariffs would lead to higher prices for its customers.  (AP)

Treasury Secretary Steven Mnuchin said he has spoken with Walmart CFO Brett Biggs regarding the next round of tariffs on Chinese goods.

Mnuchin told the House Financial Services Committee Wednesday that he has been “monitoring the situation [tariffs] very carefully” and spoke with Biggs on what items they can and cannot source.

“We haven’t made any decision yet …” Mnuchin said. “We will be sensitive to consumer items that particularly affect people on fixed salaries.”

The secretary said the department had an exclusion process on the fourth round of tariffs which will be announced in 30 to 45 days. He said the process will be built in.

Mnuchin said China was paying for the tariffs because their “currency is taking a hit.”

“As currency depreciates our companies can buy things at lower prices,” he added.

Biggs told reporters they’re “monitoring the tariff discussions and are hopeful that an agreement can be reached.” The CFO warned that “increased tariffs will lead to increased prices for our customers.”

Walmart declined to comment on what type of price hikes shoppers could expect and which products would get the biggest increase.

The retail giant announced the plan days after the Trump administration raised tariffs on $200 billion worth of Chinese goods to 25 percent from 10 percent. The decisions, which came after trade talks between the two sides fell apart, is expected to lead to higher prices on everything from clothing and footwear to electronics.