In movie analogy, the two would be competing for the Razzie awards. And it’s hard to pick a winner between them, with performances that seem equally embarrassing.

The stock market is pumped up on U.S.-China steroids, hoping to somehow stretch its unfathomable streak of record highs until the New Year, on a trade deal that none can set a date for or even quantify.

The oil market is borrowing some of that trade deal hocus-pocus too. But, more importantly, it is also buying into OPEC’s shale oil spin that masks the cartel’s own demand inadequacy.

Worse, in following the OPEC narrative, oil traders are virtually ignoring surging weekly stockpiles of and record high production reported by the Energy Information Administration.Despite some contest over its methodology, the EIA still produces data with a global reputation for transparency that OPEC can only dream of.Said John Kilduff, founding partner at Again Capital, an energy hedge fund in New York:

“These are strange times indeed on both Wall Street and the oil market. Stocks are up, chasing a pie-in-the-sky trade deal. Oil is defying fundamentals that point to at least $5 lower on a barrel.”

In Thursday’s stock market, the S&P 500, which has been hitting record highs almost every other day lately, reached a new closing peak at just under 3,097. While that milestone came without drama, the other major indices—the NASDAQ and —struggled through the day.The catalyst investors, traders and their computers wanted was a trade deal with China. But that didn’t come. Instead, investors had to deal with disappointing developments with tech giants like Cisco Systems (NASDAQ:) (NASDAQ:CSCO) and Apple (NASDAQ:) (NASDAQ:AAPL).Two weeks after the White House triumphantly announced there will be a phase-one deal and a subset of agreements that will bring the bitter 16-month U.S.-China dispute to a close, no sort of pact has been reached.The critical issues right now appear to be how much China will spend on U.S. farm products and when and how tariffs imposed earlier this year—and possibly set to be boosted next month—will be rescinded.

As of Thursday, no one in the Trump Administration or Xi Jinping’s government was signaling any clarity on when an agreement will come.

But given the propensity of both sides to keep their stock markets “juiced” on hopes of a deal, a statement could emerge on Friday either out of Washington or Beijing, or even both capitals, saying negotiators have—again—achieved consensus on key differences and are “close”—perhaps, incredibly close—to signing a deal.

On the oil front, crude prices fell just modestly on Thursday despite bearish weekly data from the EIA. The near flat finish came as OPEC skillfully diverted the market’s attention from the weak demand for its oil with suggestions that U.S. shale production could sink beyond trade expectations.

According to OPEC, there will be a smaller surplus in the oil market next year, although it still expects demand for its crude to drop as rivals pump more.

OPEC Secretary General Mohammad Barkindo also said on Wednesday there would likely be downward revisions of supply going into 2020, especially from U.S. shale.

It’s true that the notion of a shale bust-up is growing with the 30-month low in the U.S. oil rig count and other distressing developments like the financial meltdown at Chesapeake Energy (NYSE:). While it is mainly a producer, the company is one of the pioneers of the U.S. fracking revolution that gave birth to shale.

For greater perspective, the U.S. upstream sector has about 55% fewer drilling rigs than the 1,609 deployed during the highs of October 2014. But it is producing about 40% more oil than five years ago, according to the EIA.

On Thursday, the EIA said production has hit a new record high of 12.8 million barrels per day. In other short-term energy outlook data issued a day earlier, it said it expected an average all-time high of 13 million bpd for November. For 2020, it raised output projections to an average of 13.29 million bpd from a previous 13.17 million bpd. 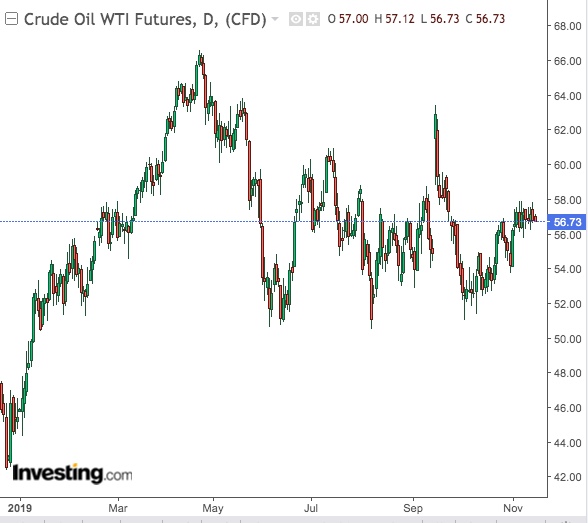 The low-rig versus high-oil production situation in one of the factors that have kept U.S. West Texas Intermediate crude below $60 per barrel and its global rival, London’s , under the $70 mark for the greater part of the year.

It’s a statistic vehemently opposed by oil bulls, who have demanded in recent weeks that the EIA either change its methodology or explain better how it arrives at such high estimates when rig counts are collapsing.

According to industry grapevine, the agency has agreed to more discussions to promote transparency on the data.

But OPEC Wants Weaker Shale To Be The Story

OPEC, sensing the change in the market’s mood toward shale, has begun talking down its main rival. And the strategy seems to be working.

OPEC Secretary-General Barkindo told CNBC this week that after talking to “a number of producers, especially in the shale basin, there is a growing concern by themselves that the slowdown is almost graduating into a fast deceleration.”

Barkindo added that these companies “are telling us that we are probably more optimistic than they are considering the variety of headwind challenges they are facing.”

In reality, what OPEC needs to address is the persistent overproduction by serial offenders such as Nigeria and Iraq—even non-member ally Russia—that make it a challenge for the cartel’s de-facto leader Saudi Arabia to stick to the 1.2 million barrels per day of cuts agreed nearly a year ago.

With the mega stock sale of Saudi state oil company Aramco just around the corner, the kingdom prefers to enforce the existing production pact and somehow keep prices up, without getting into deeper cuts.

Oil traders, of course, know this story: That when OPEC meets in December, there will very likely be no new cuts. But if this becomes a mantra now, it could pressure prices lower, especially with the absence of a U.S.-China deal. So OPEC tries to play down shale, and the market buys that.

Investing.com oil columnist Ellen R. Wald also raised a point on Thursday on why the market could be reading shale wrongly:

“Another issue traders need to consider is whether shale oil companies are being overly dramatic in expressing their growth concerns. These could be tactics designed to reduce analysts’ expectations, so when these companies reveal their Q4 earnings, their share prices won’t drop nearly as much.”

We wrote last week that if a trade deal was coming, it better come quick for oil. Otherwise, the daily grind of the markets hanging on to a hopelessly bullish theme would just be too embarrassing.