News that the coronavirus has spread further rattled and markets since Monday. The dramatic drops to start the week were spurred largely by reports of outbreaks in Iran and Italy, along with general fears about the disruption to the global economy. The toughest aspect of this crisis for traders is how much is unknown or unknowable.

The first is unknowable. The second requires us to wait for updated numbers from various international authorities and third-party observers.

Unpredictable Future Of The Virus

Doctors, epidemiologists and other scientists are fighting the spread of this virus, but are also attempting to track it. We know that the outbreak is becoming severe in Iran and is impacting northern Italy.

Reports are conflicting about the likelihood of its spread across Europe, South America and North America. In the U.S. alone, different government agencies like the Centers for Disease Control and the National Institutes of Health offer differing guidance.

Fear is mounting about the extent of the spread of the virus to South Korea and Japan, and even the International Olympic Committee could consider canceling the Summer Games in Tokyo, but we don’t know if the virus will become widespread in either country.

In other words, the experts are uncertain about the future of the virus and whether it will last a long time and sicken many more people. For markets, that means continued anxiety.

Oil prices have fallen this week, largely based on fears of the coronavirus, but we will surely see upward trends—at least a minor one—at times before this is all done.

Nevertheless, until the threat of coronavirus recedes, expect the markets to be on edge with the possibility of further major drops if bad news arrives. 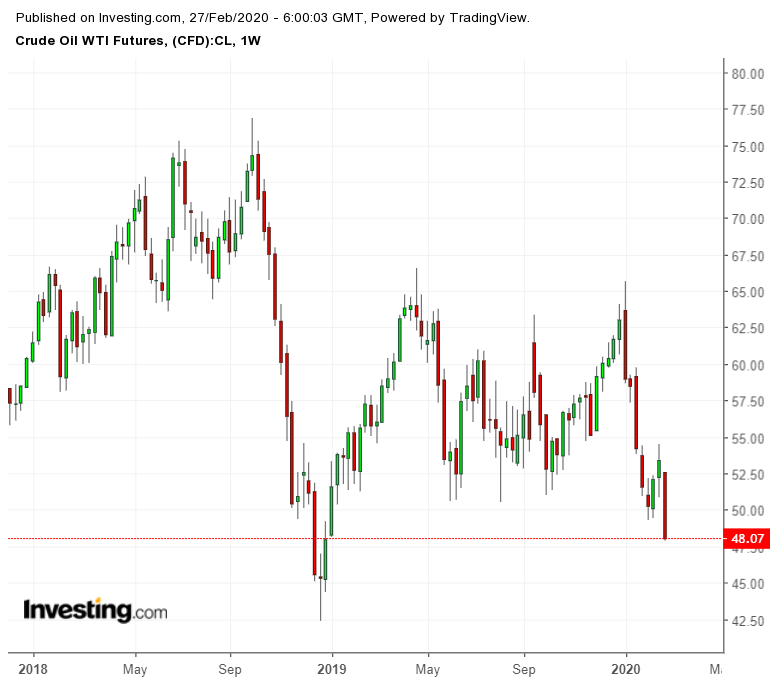 Impact Could Soon Be Quantified

Something we will soon be able to quantify is how the coronavirus has influenced demand. The outbreak began in China about three months ago, although it did not start to grab international attention until January.

As more data about oil consumption comes out at the beginning of March, we will have a better idea of how oil demand has already been affected.

China should release its oil import numbers, as will various agencies like Platts, OPEC and the IAE. From there, we can examine third party shipping trackers and try to assess demand changes in real time.

Additionally, the OPEC and OPEC+ meetings on 5 and 6 March will reveal more about what that group of producers sees in the market over the coming months.

This could be a tough time to predict the market because so much depends on this virus. However, at times of increased anxiety, there will likely be significant movement, which could provide opportunity for traders.