The U.S. economy broke a record for its longest expansion ever Monday.

Economic expansion has continued for more than 10 years. Growth is now in its 121st month since the Great Recession ended in June 2009, according to the National Bureau of Economic Research.

The economy set its previous 120-month record between March 1991 and March 2001. That growth period ended after the dot com bubble burst. 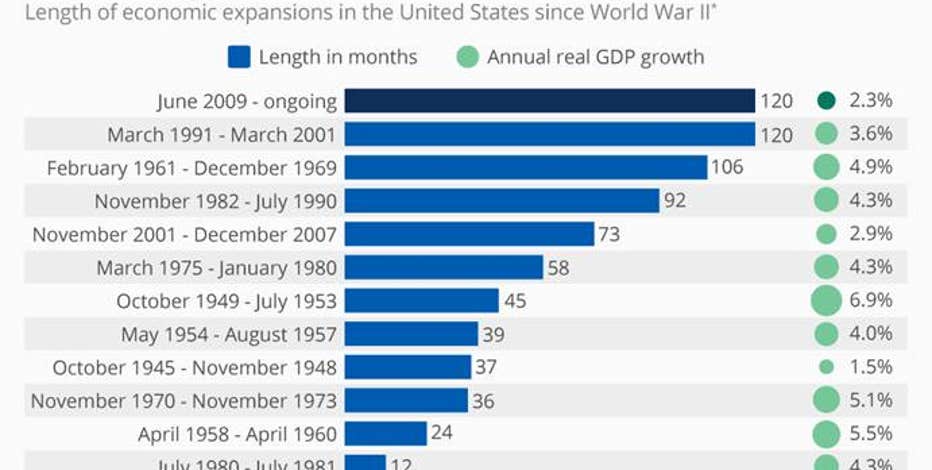 The rate of growth, however, has been slower than during other periods of economic expansion. For example, during that previous record-holding period in the ‘90s, the average growth was 3.6 percent per year. The 10 previous economic expansions, going back to World War II, averaged a 4.3 percent. But this current expansion period has averaged just 2.3 percent growth per year.

All Americans haven’t benefitted from the growth equally, according to Steven Pressman, a Colorado State University economics professor who focuses on income inequality.

Sixty percent of economic gains in the past decade have gone to the top 1 percent, Pressman wrote in The Conversation. Everyone else has seen income gains of less than 5 percent or less than 1 percent annually.

For example, secondary school teachers’ inflation-adjusted salaries actually declined by about 0.3 percent in 2018. At the same time, median pay including non-salary compensation for top CEOs in the U.S. rose by an inflation-adjusted 65 percent between 2009 and ’18, according to Pressman.

The wealthiest families have seen the biggest gains, thanks in part to having a larger share of their wealth in financial assets like stocks — which have nearly doubled in price since their pre-recession peak — Pressman said.

Of note, the S&P 500 and the Dow Jones Industrial Averages are approaching fresh record highs, after posting the best June since 1955 and 1938 respectively.

But middle-income households have most of their wealth tied up in their homes, and average home prices are up by less than the inflation rate since their pre-recession peak in 2006, Pressman said.

Pressman also noted some non-financial metrics in his assessment. He pointed out that life expectancy and fertility rates have been falling, especially among the poor, and that more young adults are living with their parents and putting off marriage.

“These are things that normally happen during economic recessions and depression,” he said.

Maybe that’s why a recent survey from Bankrate found that everyday Americans are less positive on the state of the economy than experts. Thirty-nine percent of people they polled said the economy was “not so good” or “poor,” while all of the experts they talked to rated the economy as “excellent” or “good.”

Everyday Americans were also more likely to expect a recession to hit within the next year, according to the survey. A fifth of those polled said they believed a recession has already begun.