U.S. Corn Bulls Fight To Stay In The Game Amid Weak China Demand

“Keep the faith:” corn bulls may have to increasingly tell themselves that, as China’s buying remains slow amid its “partial trade deal” with the U.S. and crop weather looks ready to turn supportive.

The of the Chicago Mercantile Exchange, December, was down for a third straight day in early Asian trading on Tuesday, sliding about 0.3% after losing a combined 2% over the past two sessions.

The catalyst for the market’s slide was mid-October export estimates that came in at under 510,000 tonnes. That was higher than the 450,000 tonnes sought by bears but much lower than the 650,000 forecast by bulls.

Another statistic that did not help the bulls: China’s purchase of just 6,500 tonnes.

While Chinese demand for corn and other animal feed has been anemic in recent months due to its epic loss of herd from the African Swine Fever, traders have been keeping up hopes that Beijing will take more of the grain from the U.S. after the “first phase” of the trade deal announced by the White House on Oct. 11.

Trump said the partial deal included China agreeing to raise U.S. agricultural purchases to between $40 billion and $50 billion from $8 billion to $16 billion. China’s Vice Premier Liu He has since clarified that while progress was made, more talks were needed. The U.S. grains exports data confirmed just that: corn had yet to benefit.

The last time Chinese importers booked their largest U.S. corn purchase was in March, when they bought about 300,000 tonnes for the 2018/19 marketing year. That was the highest volume in at least 5½ years.

There could be two other reasons now for the market’s pullback—technically overbought levels and forecasts for drier weather.

Jeff Kaprelian, a grains analyst at The Hueber Report in St Charles, Illinois, said on Monday there was at least one school of thought going around that “once we get through the next few days, there will be a wide-open harvest window that should allow for rapid catch up.” 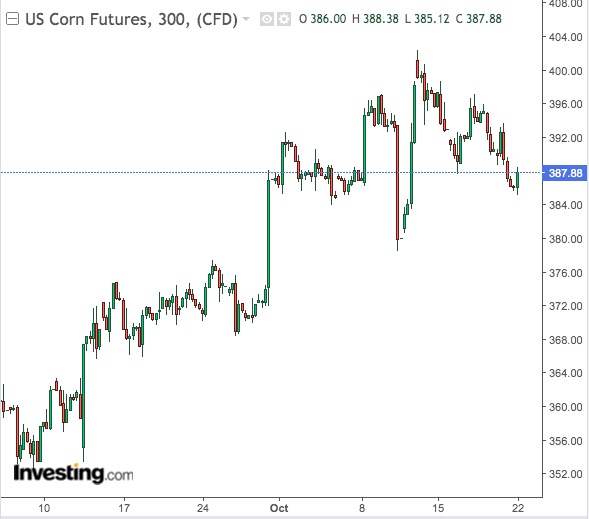 At around $3.86 per bushel, December corn is 3.7% down from a week ago, when it hit three-month highs of above $4.01. Prior to that, it had a blistering five-week rally on fears that wet, cold weather will do much of the crop in. Without a recovery in the coming days, the market is likely to post a second straight week of losses.

Thursday’s crop progress report for corn from the U.S. Department of Agriculture had many stats that seemed positive for the grain.

With freezing temperatures, heavy snowfall, and high winds hitting the northern Plains, the corn in North Dakota was only 4% harvested.

Iowa farmers have only 15% of their corn out of the fields, while Illinois and Indiana growers’ activity ranks in the 30s’ percentile range.

Even so, Kaprelian noted, overall crop conditions rose by one point to 56% of the good/excellent status. The market had expected a one-point decline instead.

Investing.com’s Daily Technical Outlook has a “Sell” recommendation on December corn, projecting support as low as $3.775 per bushel in the near-term.

But Todd Hubbs, writing in the Successful Farming blog on Monday, placed a far greater bet on a corn price outbreak:

“Over the last two marketing years, the central Illinois corn basis appreciated around 16¢ from mid-October to the end of February.”

“If the projections for corn consumption and ending stocks currently in place from USDA hold, any price appreciation over the next few months would result from a strengthening basis.”

Mike Seery of Seery Futures in Plainfield, Illinois, had a cheery outlook as well, noting that December corn was trading above the 20-day moving average but still below their 100-DMA.

“Volatility remains very low and that, generally, is the case during harvest as we will bring nearly 14 billion bushels onto the market. So stay long, and continue to place the proper stop loss as the risk/reward is in your favor.”