So, is Donald Trump winning the trade war with China, at least from a commodities perspective?

It might sound like a premature—even odd—question, considering that China just devalued its currency. An appreciable time gap is probably needed to tell how well the Trump administration is managing and firing back at Beijing—although the market impact for the U.S. over the past 24 hours has been nothing short of a disaster.

Still, if you’re wearing a commodities hat like me, you’d probably be asking this anyway, as the U.S. president seems to be getting at least one thing that he wants now: cheap(er) oil.

Of course, there might be a bigger prize awaiting Trump if the currency market and global market fallout from the trade war persists and recession fears start ratcheting up: The Federal Reserve might be forced to do a second and possibly bigger rate cut within the next month to counter the ‘s move. Even some of the president’s ardent supporters, such as prominent energy markets commentator Phil Fynn, believe Trump’s additional 10% tariff on Chinese imports, beginning on Sept. 1, is designed to force the Fed’s hand.

This is because the president has made no secret of how he much he loathes the modest announced by the Fed on July 31. While some had hoped for a 50-bp cut last week, it wouldn’t have been inconceivable for the president to have even thought of squeezing a full percentage point out of the central bank in the near term, based on the inordinate pressure he’s been applying on its chairman Jay Powell.

But Powell has practically shut the door on more cuts for the remainder of the year, describing last week’s action as a one-off “mid-cycle adjustment”. “As usual, Powell let us down,” the president tweeted after the 25-bp cut. On Monday, the United States labelled China a “currency manipulator”, heightening pressure on the Fed to ease. Trump also retrained his tweet gun at Powell, asking: “Are you listening, Federal Reserve? This is a major violation which will greatly weaken (the) China (yuan) over time!”

Another Fed cut could certainly boost prices of raw materials, aside from equities, of course, and would in theory be a win for commodities. But is a commodities rally really what the president desires? Sure U.S. prices could stabilize and even go higher in the event of a rate cut. Despite China’s announcement on Monday that it was freezing U.S. agricultural imports, Chicago soybean prices, which initially fell 1.6% to June lows, recovered to close little changed. The idea of an impending, and possibly deeper, Fed cut may have aided the recovery. Again, in theory, that’s good for Trump as 80% of farmers in the heartland voted for the president in the 2016 election. And if they get higher prices for their produce, it’s certainly better for him than having to write billions of dollars in subsidy checks to secure their votes again in 2020.

So, while an ag market recovery is, in theory, good for Trump, those who know the president well also know that the commodity that he’s most passionate about is oil.

History has proven that high oil prices are never too good for a president seeking reelection, and Trump is 15 months away from a hopeful second term.

Reuters’ energy analyst John Kemp noted in a column last year that the rise in benchmark U.S. crude prices from a low of less than $30 a barrel in February 2016 to more than $70 in July 2018 had boosted the economies of Texas, Oklahoma, North Dakota and other producing states. But Kemp also noted that most of those states were solidly Republican. He added:

“The president, therefore, is paying much closer attention to the harmful impact of higher oil and gasoline prices on consumers in swing states.”

Trump has repeatedly expressed dissatisfaction in the past with how oil prices and production were controlled by OPEC—which, incidentally, has extended until March 2020 its commitment to cut regular output by 1.2 million barrels per day.

By keeping trade relations with China in a flux, the president, in an odd way, achieves the cheaper prices he seeks on crude, and relatively, gasoline at the pump. 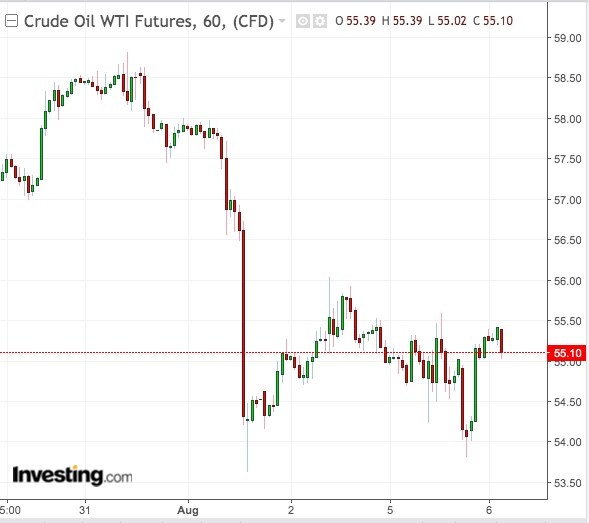 U.S. is down almost 6% since August began, although it remains up about 21% on the year. , the benchmark for oil outside of the U.S., broke the $60 per barrel key psychological support on Monday.

Dominick Chirichella, director of risk and trading at the Energy Management Institute in New York, is in no doubt of the path of lower resistance that lies ahead for oil from the heightened trade war.

“The latest moves by both the U.S. and China are projecting a scenario where oil demand growth is likely to slow more than what has already been forecast.”

He noted that the world’s three leading agencies for energy—the U.S.-based EIA, the Paris-based IEA and the Vienna-based OPEC—will all be releasing their monthly oil forecasts next week, and most market participants expected the trio to lower their reading on global oil demand.

“For the short term it is all about the trade war with the market paying no attention to anything else. Trade headlines will likely be the main market price directional driver for at least the next week or so.”

Even cheaper oil may be coming: Bank of America speculated on Monday that oil could crash to $30 per barrel if China started buying Iranian oil in further retaliation against Trump and his sanctions against Tehran.

It’s not known yet how much that will please the president, considering the defiance by two of his rivals, despite the cheaper oil he’ll get.