Trump tariffs cost US importers a record $6.8B, driving up consumer prices

Before President Trump began a trade war with China, the U.S. was shipping $1.47 billion more in hardwoods overseas than American companies were importing.

That surplus shrank 12 percent last year as the U.S. imposed double-digit tariffs on Chinese goods, and Beijing responded in kind, according to the Hardwood Federation, and it’s likely to dwindle further this year as the standoff between the two countries heats up.

It’s the opposite of what Trump – who has long complained about massive trade imbalances that favor U.S. trading partners – campaigned on delivering, and it’s spurring growing frustration among businesses.

In July alone, U.S importers paid a record $6.8 billion in tariffs, according to Tariffs Hurt the Heartland, an alliance of more than 150 trade groups opposing the duties. The vast majority were on Chinese goods, though Trump’s White House also has imposed duties on steel, aluminum, solar panels and washing machines and threatened others. 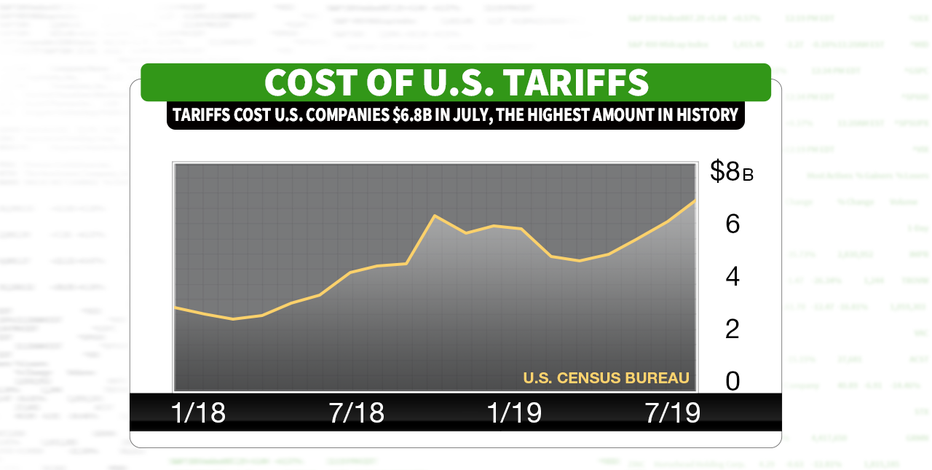 The resulting surge in costs for supplies is forcing many business owners to choose between raising prices and laying off workers, and the pain is likely to worsen, with Trump boosting tariffs on some $200 billion in goods to 30 percent after Beijing pushed back against previous duties.

“The trade war is already in its second year and with every escalation, the more it permanently impairs confidence,” said Michelle Meyer, an economist with Bank of America. “The unpredictable nature of the trade war will keep businesses, at best, in wait-and-see mode.”

That outlook jibes with the assessments of manufacturers, retailers and some lawmakers who have long warned that the White House risks undermining growth from a 2017 tax cut with the duties, which Trump says are a useful tool in forcing concessions from China.

The country has taken advantage of the U.S. for decades, the president has said repeatedly, and hurting its exports with tariffs will ultimately yield a trade deal that allows American companies broader access to the world’s second-largest economy and ends Beijing’s appropriation of trade secrets as a condition of doing business in the country.

“We’re in a great position,” Trump said at the G-7 summit in Biarritz in late August.  “If they don’t make a deal, it’s going to be very bad for China.”

Members of the Hardwood Federation, a Washington-based trade group representing the $210 billion industry, are eager for such an agreement, though they believe it will still take considerable time to rebuild the ground they have lost in China, president Dana Cole told FOX Business.

While a swath of companies have complained about the difficulty of developing and maintaining supply chains — a process that often takes years — when they’re uncertain which countries might be affected by future U.S. tariffs, the situation is even more complicated for hardwood firms.

The industry is agricultural, Cole explained, but relies on a crop that can take 30 years to mature as opposed to a single growing season.

Deliveries of red oak and cherry wood ­– which were popular with Chinese consumers – dropped 36 percent and 28 percent, respectively, in the first six months of this year amid Beijing’s retaliatory tariffs.

“A lot of times, people will say, ‘Why don’t you find different markets for these types of wood that China’s not buying?’” Cole said. The answer is that there are none large enough to absorb such quantities.

Across all industries, U.S. shipments to China have sunk by $615 million since the trade war began, according to Tariffs Hurt the Heartland, whose supporters include the National Retail Federation and the Consumer Technology Association.

Throughout, executives have chafed under the White House’s insistence that China is paying for the tariffs. The decline in value of the yuan doesn’t come close to making up for the duties, they say, which American importers must pay to customs officials when goods arrive in U.S. ports.

The levies paid in July, which were the highest in U.S. history, rose 62 percent from the year before, according to Tariffs Hurt the Heartland.

Learning of changes via 280-character Twitter posts from the president made the changes even confusing for some businesses, since administration offices weren’t always up to speed and couldn’t answer questions such as whether effective dates applied to shipments already in transit.