President Donald Trump said the 25% tariffs currently imposed on $250 billion in Chinese goods will not be reduced, after he met with President Xi Jinping at the G-20 summit in Japan and agreed to hold off on raising levies.

Trump agreed to restart trade negotiations, which collapsed in early May, and let Chinese tech giant Huawei buy products from U.S. companies so long as it does not post a threat to national security.

The president said he agreed to let Huawei buy U.S. products “at the request of our high tech companies.”

Trump also said Xi agreed to increase purchases of American agriculture goods during the negotiations. He added that he was in no hurry to reach a deal. 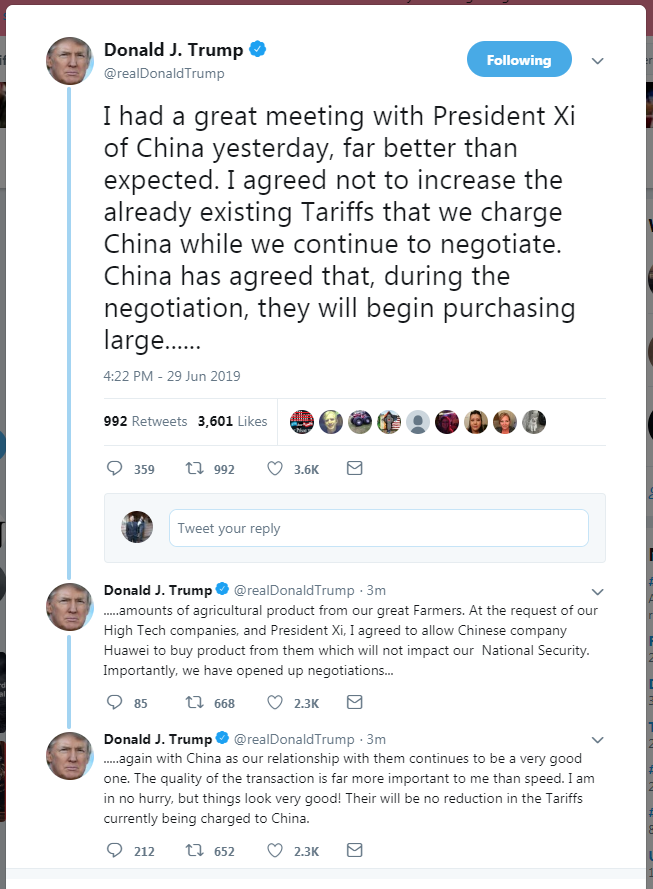 The truce reached in Osaka on Saturday between the U.S. and China was largely expected by Wall Street. Whether or not a deal can be reached, however, is another question.

The Eurasia Group has forecast only a 45% chance that Beijing and Washington reach a deal by the end of the year. The issue of intellectual property protection remains a major sticking point between the two sides.

Goldman Sachs has said its base case remains a 10% tariff on the remaining $300 billion worth of Chinese exports to the U.S., which is lower than the 25% rate proposed the United States Trade Representative.

More than 600 U.S. companies, including Target and Walmart, had urged Trump not to impose additional tariffs, warning that such a move could cost 2 million American jobs.

Canadian businesses’ message ahead of the election: ...