Time To Bail Out Of Gold? Wait For The Fed First

Is the gold rally under threat?

And many found it in gold. 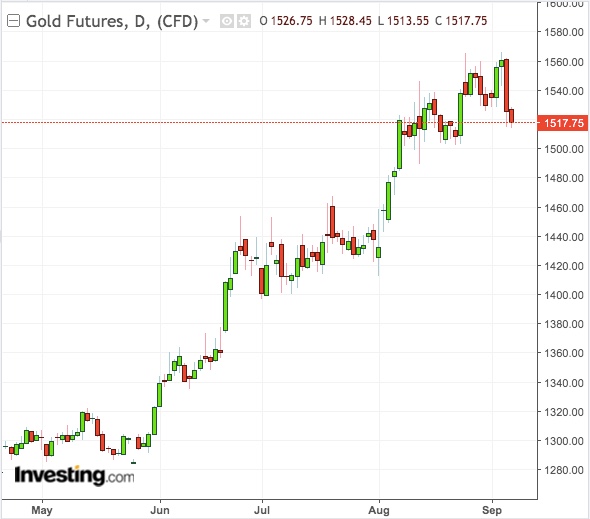 The yellow metal has had a meteoric rise over the past four months, rising from a low of around $1,285 per ounce in May to six-year highs above $1,566 in Wednesday’s futures trade on New York’s Comex.

But just as stunning as that rally was the near $35 (or more than 2%) drop on Thursday over news that Washington and Beijing were poised to restart trade talks in October. That marked the largest one-day loss for since January and the biggest percentage slide for bullion or spot gold in 2019.

Current Rally May Be Reaching Exhaustion

Gold longs’ struggle of late to make the kind of advances that seemed easy just a couple of months ago suggests that this year’s rally may be reaching exhaustion.

Thursday’s intraday slide to below the key support of $1,515 may have set the market up for what could eventually be a return to $1,400 levels, some say.

While the die-hard gold bug and his favorite metal won’t yet part, the average gold investor is probably awaiting the Sept. 17-18 to see what that brings for U.S. rates.

The Fed cut interest rates by 25 basis points at its last meeting in August and is expected to do the same at its forthcoming meeting, bringing rates to a range of between 1.75% and 2%.

If that happens, gold could regain steam for an upward trek. The expectation is for it to make a run for $1,600 before attempting the ultimate challenge: A new record high to rewrite the 2011 peak of above $1,900.But the opposite could also happen, with gold spiraling downward from here.

No Certainty Of Another Fed Cut

Despite the Fed Rate Monitor Tool on Investing.com giving a for a 25-bp cut this September, Canadian advisory group TD Securities said it wasn’t sure about the Fed delivering:

“With the S&P 500 sitting only a few percentage points off its highs, financial conditions have not tightened materially, which could embolden the Fed to ultimately disappoint the market’s rate cut expectations.”

Michael Boutros, a technical strategist for gold, sounded another note of caution in an update issued earlier this week. Since September began, Boutros said gold has marked a third divergence high in price, with its daily Relative Strength Indicator holding a multi-month support trigger.

“Weakness beyond the monthly open would risk a larger setback in gold prices, with such a scenario targeting channel support around the 8/13 low of near $1,479 – an area of interest for possible exhaustion/long-entries IF reached.”

“Initial resistance remains at $1,558 with a break higher targeting longer-term objectives at the confluence of the upper parallel and the 61.8% retracement of the entire decline off the record 2011 highs at $1,586.”

There’s still plenty of scope for gold to extend its rally on the potential for more dismal global news or data. Futures are up about 18% on the year, while the spot price is about 16% higher. But to make a record high before the year end, it will need to gain nearly 30%, a probability looking more doubtful than ever now.

Even without its own fatigue, gold could succumb to other pressures, particularly the comeback in equities and other risk assets if U.S.-China developments remain encouraging.

The TD Securities’ note alluded as much in its note, saying:

“Should the positive trade headlines cluster, we could well see the precious metals complex consolidate lower, particularly given that other event risks have somewhat simmered, ahead of the various central bank meetings in September.”

So, is it time to bail out of gold?

Let’s wait for the Fed to show its hand first.