The Curious Case Of Copper’s $3 Support

support at above $3 per lb has been unbroken for 25 sessions in a row. It has chalked up seven winning months out of eight, a phenomenal run for a metal many bullish investors in commodities had given up on just two years ago.

According to commodities lore, one can predict world economic trends by studying the price of copper. The metal’s diagnostic ways are so fabled that it was even called ‘Dr. Copper.’

The red metal’s golden era was in the previous decade. It started January 2000 at 86 cents per lb on the New York Mercantile Exchange’s COMEX division and finished December 2009 at $3.33. A whopping 287% growth. Clearly, copper wasn’t just reflecting the economy in that decade—it was front-running it.

But that story unraveled over the next ten years.

Although global GDP growth was almost exactly the same this decade as the last—expanding by a compounded 30%, or an average of 3% per annum, between 2010 and this year—copper took a different path.

Hero To Zero … And Back!

In other words, in a span of just two decades, copper as the world’s leading industrial metal, had gone from hero to zero.

Why the total collapse in correlation?

One reason was that the latter half of the 2010-2019 decade was filled with fears of a global economic slowdown that put a cap on copper prices. For instance, the Trump administration’s trade war with top metals buyer, China was one the biggest antidotes to higher copper prices.

But this year, the infrastructure rebuilding required in China after the COVID-19 outbreak has boosted copper prices since April. This was despite the malaise in the global economy from the pandemic.

Back to the present: Where’s copper headed?

$3 Support May Be Tested, But Rebound Seen

At least two chartists think a break of the $3 support for COMEX copper is in the offing. But they also argue that any downside will be brief as the metal remains fundamentally strong. 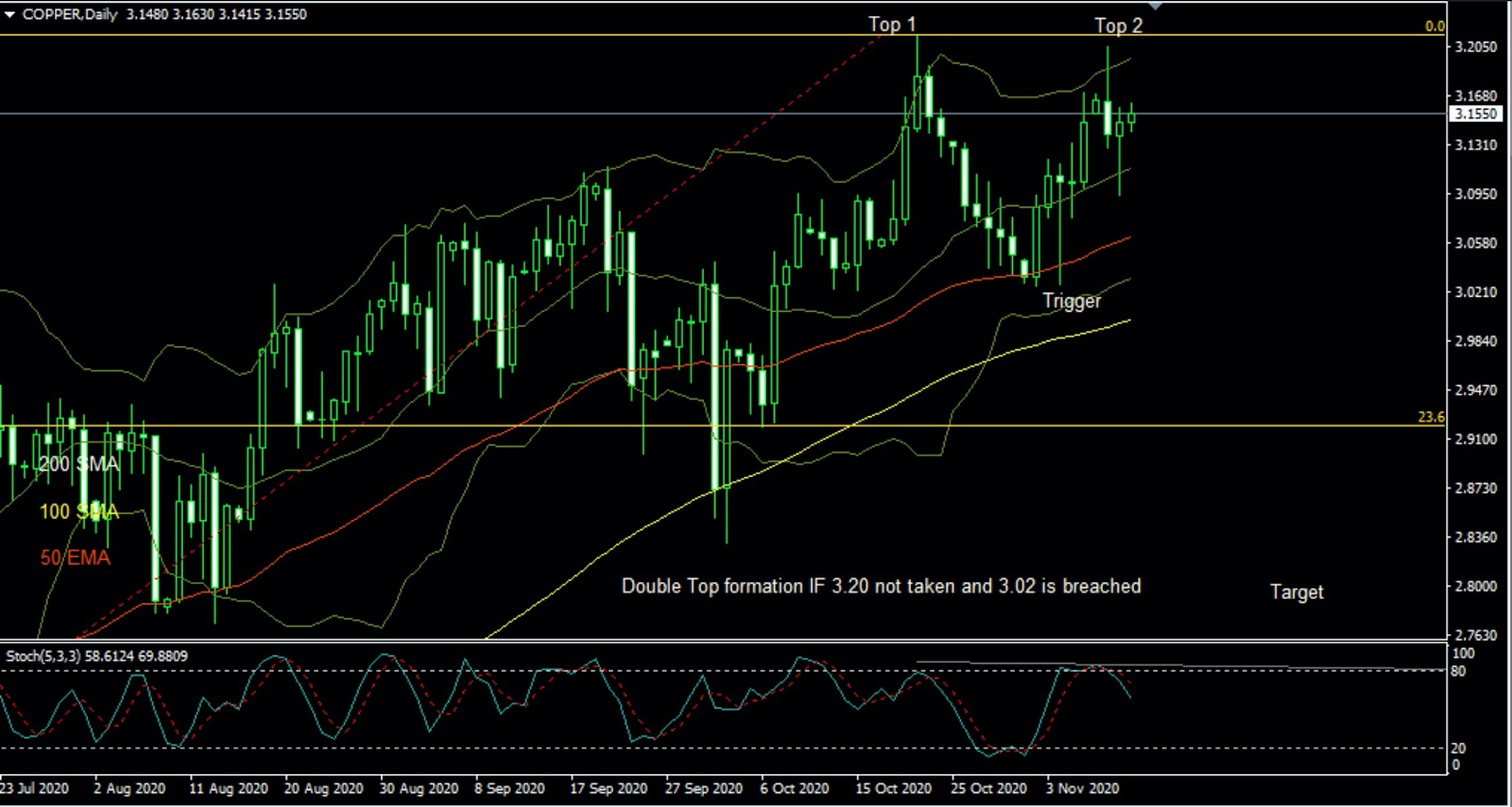 U.K.-based Eno Eteng, who studies a broad range of commodities and securities, including forex and stocks, says copper’s ascending support trendline confirmed the continued restriction of its prices within the borders of what appeared to be a “rising wedge”.

In a blog on InvestingCube, Eteng wrote:

“This move also found support at $3.0920 and has propelled copper price above $3.1255, intending to hit $3.1865. However, failure of price to climb beyond this point converts the price pattern into a double top (peaks of 21 October and 9 November). This would place the $3.0275 price area as the neckline.”

“Clearance of the latter would probably invalidate the wedge in the long run.”

Coimbatore-based independent commodities chartist Sunil Kumar Dixit said the upside break in copper may be capped at $3.20 for now.

“Any further rally will only be confirmed on taking on the previous $3.30 handle.”

“The corrective wave has a potential support at 2.80 which also coincides with the bullish confluence of the 50-day EMA (Exponential Moving Average) and the 200-day SMA (Simple Moving Average) on the weekly charts.” 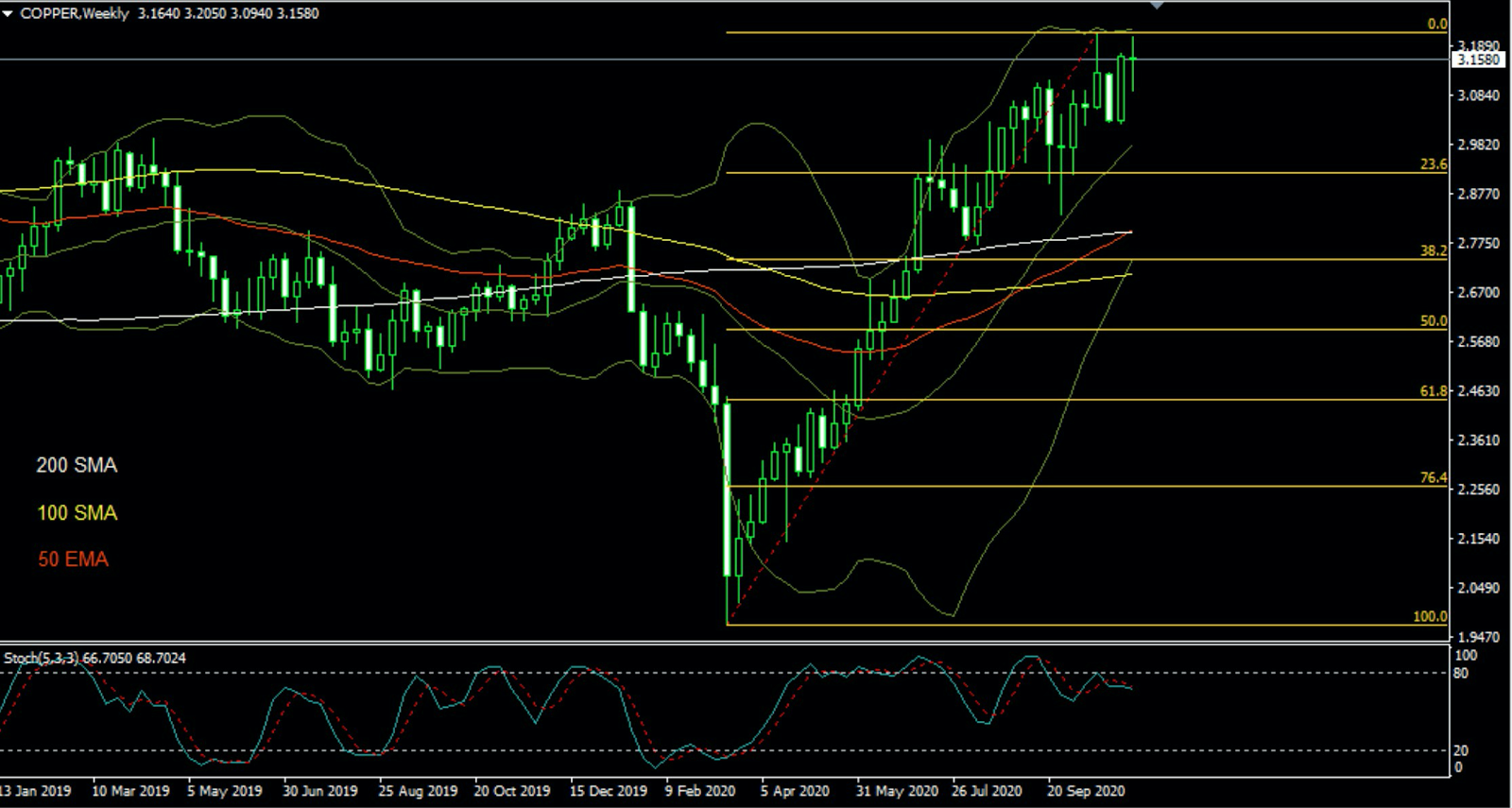 On Investing.com’s end, while our base case for copper shows support unbroken at $3 for now, any disruptions in the economic narrative before the end of 2020 and beyond could change that.

As with all projections, I urge you to follow the charts but temper them with fundamentals—and moderation—whenever possible.