Gold has eased a bit in the last few days as the broad market has exploded up. Why?

Because traders really want everything to get back to normal, including getting indices back to their pre-COVID highs.

Does it make sense? That’s a topic I’ve discussed endlessly. No, in that consumer spending accounts for more than 80% of U.S. GDP and there’s no way it can pick up to pre-virus levels quickly. Lots of consumers lost their jobs; many more will not be willing to pursue the same spending (read: activities) that they did before COVID showed up, at least until there’s a vaccine.

But it also does make sense because the Fed is making it make sense. The Fed is backstopping every market other than equities, which are soaring as a result. If the Fed is going to backstop all corporate debt, then crisis-based insolvency ain’t an issue, so cheap stocks are bargains headed higher!

The prevalence of zombies before COVID highlights how much low interest rates had already disturbed the market: according to Ned David Research, 36% of companies in the Index of small cap companies were unprofitable before the pandemic. Investors ditched these stocks in a hurry in March, but once the Fed made clear it was going to backstop everything, investors jumped back in. After all, the biggest losers can generate some of the biggest wins if there’s suddenly a reason for a rebound. And so zombie companies on the Russell 2000 are outperforming the overall index this year. 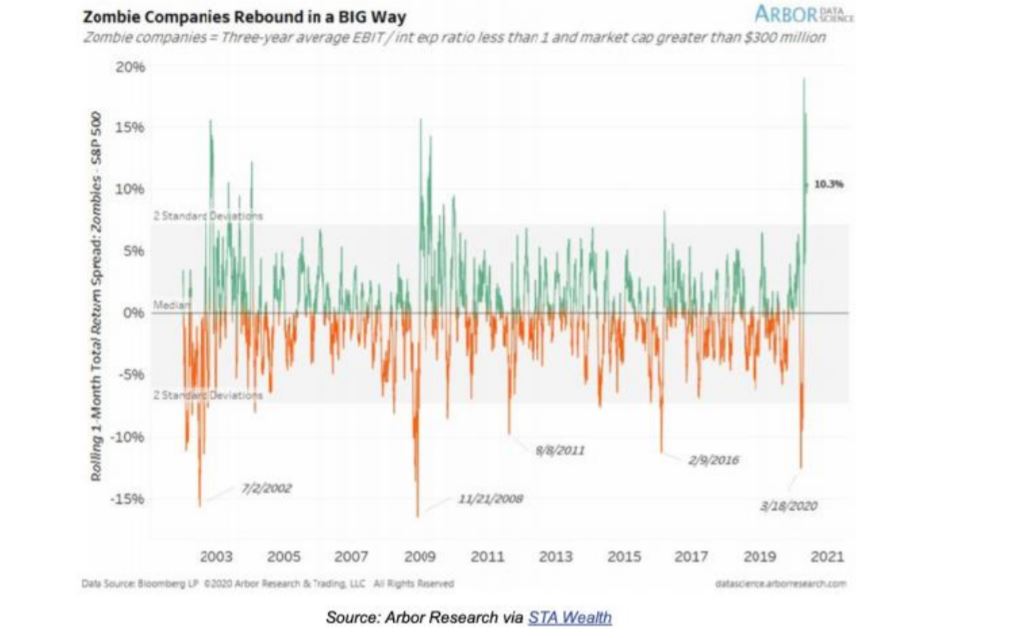 This can all persist until something derails the status quo. And there are two main threats, as I now see it.

One I’ll describe as COVID 2.0, which runs the gamut from a second wave of infection forcing everyone into another lockdown to a grinding realization that persistent weak spending in so many sectors just cannot justify valuations this high.

I have no idea how serious the threat of a second wave. Parts of China have had to go back into lockdown, including the 108 million people in Jilin province. Many other places are reopening now, so we will soon see how infection rates respond.

Bigger picture, what we need is a vaccine. Here, I get conflicting insights. In a report quoting virologists at respected research institutes, the New York Times recently wrote: “The coronavirus itself has turned out to be clumsy prey, a stable pathogen unlikely to mutate significantly and dodge a vaccine. More than 100 research teams around the world are taking aim at the virus from multiple angles.”

That gives hope. But then, I remember that coronaviruses have been around as long as we’ve understood how to create vaccines, and there hasn’t been a successful coronavirus vaccine yet, ever, often because coronavirus antibodies often don’t persist in the body. So, we’ll see.

As for the grinding realization that stocks are overvalued in a slumping economy, I think that becomes more likely in time. At the moment financial markets are not focused on COVID risks. Investors are focused on the positives – reopenings and return to growth and vaccines. And that will not change until there’s a solid reason or two for it to change – because investors have loved a decade-long stock bull market and aren’t going to let it go easily.

Remember, there have been some important forces driving this bull run.

 Low interest rates have limited or erased bond yields. Large pools of low-risk money that has always owned bonds for reliable returns have had to buy stocks instead. That switch pushed a huge amount of capital into the stock market.

 The rise of indexing: index funds became hugely widespread during this bull market, which has encouraged investors to just buy the market. Why try to pick stocks when you can diversify your risk through index funds – and everything goes up anyway? Of course, the more money that flows into indexes the more everything rises, so it becomes a self-fulfilling prophecy.

 Share buybacks: companies took advantage of low interest rates to borrow capital and used the funds to buy back their own shares at a phenomenal pace. Financial Engineering 101: fewer shares mean per-share metrics, like earning per share, appear to improve.

The first two of these three points remain fully in place. The third partly so; some of the COVID monies that governments made available barred companies from spending on share buybacks, so companies that took such loans or grants will have to stop buying their own shares. Companies that did not accept such COVID funds are free to carry on.

Bottom line: for the moment, the stock market is focused on the positive. It will take a mounting pile of bad data to change that. COVID could cause that – it could already be coming, for the reasons I mentioned about poor reticent consumers, or it could be fuelled by a second wave of infections.

The other thing that could change it is the renewed U.S.-China trade war. Which is getting more serious by the day.

Without diving into details, the gap between the U.S. and China keeps getting wider. Hong Kong is a good example. The U.S. signed the Hong Kong Human Rights and Democracy Act in November, cementing its stance on how China should manage Hong Kong protestors and the region’s semi-autonomy. Now China is signalling its intent to impose new national security laws on Hong Kong, which it seems would in effect end its autonomy.

This matters. Hong Kong account for two-thirds of China’s overall foreign investment inflows and international investors will look at Hong Kong very differently if it becomes part of China. And the Act calls for the U.S. to take sweeping sanctions against companies and individuals should Beijing abandon ‘one country, two systems’, which is precisely what Beijing seems to be suggesting.

The U.S. is already moving in that direction, in that the Trump administration is moving to delist a huge number of Chinese companies from U.S. exchanges. The justification is about access to financial information that has to date been kept private because the companies in question were partially state owned. The real reason, though, is to squeeze out China’s access to international money.

In terms of impact, it’s important to realize that this isn’t just about investment flows. Trade patterns between the world’s two largest economies are embedded into the fabric of many companies, especially technology hardware firms. For example, most U.S.-listed semiconductor companies do their designs in the U.S. but they outsource manufacturing to Taiwan of South Korea and then sell to customers in China, who incorporate the chips into larger products that then get sold internationally.

Trade wars impede all of this, with great economic impact. The scale of that impact is exactly why markets slid so significantly in the second half of 2018. Today’s escalation, with COVID blame adding fuel to the fire, looks worse already and it’s just getting started.

Broad markets are rising. Despite all the reasons it doesn’t make sense, don’t fight momentum and the Fed. For now, stocks will continue to rise.

A rising market takes some wind out of gold’s sails by reducing fear, but gold’s fundamentals remain very strong. If a rising market holds gold back for a month or two, so be it. Real rates will remain negative, gold miners will keep making good money and thus stand out across equities, and when reality eventually pulls stocks down (COVID 2.0 or U.S.-China trade war) gold will rapidly regain its shine.

If gold slows for a month or two, a good portion of the investors who moved in over the last month – indeed, over the last year plus – will stick around. Gold stocks shot higher in April and May because generalist dollars moved in and most of those dollars are investors, not traders. They moved into gold for fundamental reasons and will stay in it, pause or no pause, as long as the fundamental arguments remain in place. That matters because stock charts will remain bullish, majors will keep shifting to M&A mode, and juniors will have money to explore and make discoveries.