A Southern heat blast has saved U.S. natural gas from testing the depths of $2 pricing, jacking up air-conditioning usage and providing relief for the market ahead of the advent of the typical “shoulder season” for weak demand.

As traders await the U.S. Energy Information Administration’s for the week ended Aug. 30, bets are that stockpiles of the fuel will rise in the coming weeks, though not by the much-feared triple-digit builds that could shatter the market’s $2 per million metric British thermal units (mmBtu) support.

But some analysts like Dan Myers of Houston-based Gelber & Associates are predicting a build higher than 80 bcf for the Aug. 30 week. They, however, also expect heat in Texas could lead to more air-conditioning demand and attendant gas-fired power generation.

Said Myers in an outlook posted on Wednesday:

“Current heat in Texas that will expand into the Southeast in the mid-range is bolstering spot markets and contributing to the recent rally.”

“The warmer-than-normal weather in early September won’t curb injections significantly at this point in the season. But it should prevent an otherwise quicker rise to very large, 100+ bcf builds seen in May and June.”

Dominick Chirichella, director of risk and trading at the Energy Management Institute in New York, is predicting a build of 86 bcf for last week.

NatGas Prices Up Two Weeks In A Row 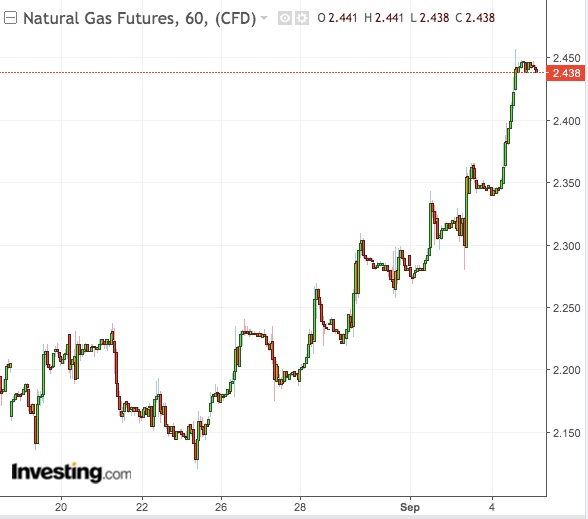 Three straight days of rally from Monday have given the October contract a week-to-date gain of nearly 7%, after last week’s 6% gain.

For now, there is little risk of the benchmark gas contract losing the key $2 per mmBtu support, given its 45-cent buffer.

Meanwhile, Investing.com’s “Neutral” call on natural gas from two weeks ago has been replaced with a “Strong Buy.” On the site’s Daily Technical Outlook, the top-end resistance for October gas has also been upgraded to $2.605 from $2.297.

“The technical traders have moved back into the game on the buy side after a positive technical breakout to the upside signaling the possibility that prices could work their way toward the $2.80/mmbtu level for the spot contract.”

He said the driver for the market’s improved performance was the projection for further warming in major portions of the U.S. over the next several weeks.

Chirichella attributed the coming warmth across the Central and Eastern U.S., and especially in the South, to delayed effects from Hurricane Dorian that lashed Florida in the weekend.

Last week, the weather was near normal with 76 cooling degree days (CDDs) versus a 30-year average of 74 CDDs for the period.

CDDs measure the number of degrees a day’s average temperature is above 65 Fahrenheit (18 Celsius) and are used to estimate demand to cool homes and businesses.

Chart Of The Day: Soybeans Set To ...