If there’s one season in the calendar that oil bulls wish would just go away, it must be the season for refinery maintenance.

Refiners typically shutter their plants during spring and fall for repairs and upgrades, causing crude stockpiles to build and prices to slide.

This fall season though, their absence has upended the supply-demand equation so much that traders are finding it hard to make a realistic call on where crude and product balances would stand when processing capacity returns to normal.

“Seriously, even the bears have joined the bulls in asking: ‘When are these refiners coming back?”

The market’s perplexity is underscored by last week’s refinery runs, which came in just a notch above 83% of capacity, data released by the U.S. Energy Information Administration (EIA) on Thursday showed. Typically, refineries run at their optimum during the peak summer driving season, averaging 95% to 98%.

“An 83% run rate is super low, even for a post-driving season. I haven’t seen that in years.”

The net effect of such a low run rate is a crude that came in at 9.3 million barrels last week, more than triple expectations. While in theory, that should have sent oil prices down like a stone and left bears in delirious joy, the market actually ended higher on the day. 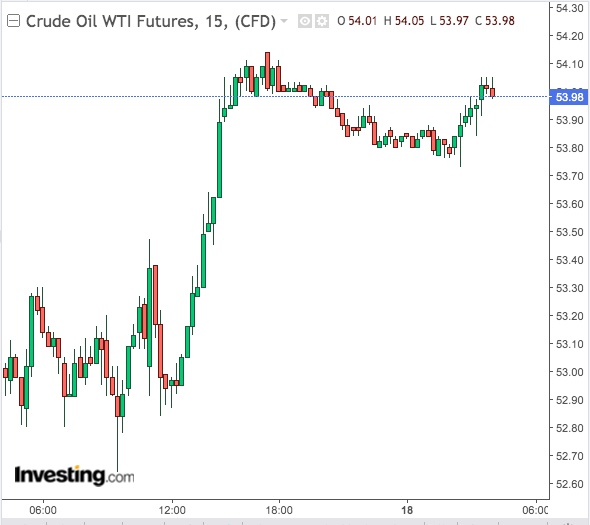 Traders Wising Up To Stunning Drop In Fuel Inventories, Some Say

The main reason for the rebound, it appears, is traders taking stock of something else in the EIA data that worried them more: a stunning drop in stockpiles of both gasoline and distillates, the two key fuel components processed from crude.

Distillate inventories fell by 3.8 million barrels, against forecasts for a decline of about 2.4 million barrels. , which comprise to a variety of “heavy-blends” that include diesel, jet and maritime fuels, dropped 13 million barrels over just four weeks.

Analysts bullish on oil, like Phil Flynn at Chicago’s Price Futures Group, have been warning that prices of fuel—and by extension, crude—could take off like a rocket in coming weeks when refiners return in full force to further deplete inventories.

“The demand for ultra-low sulfur diesel is exploding and due to the IMO rules that go into effect on January 1, there is a scramble for supply.”

From 2020 onward, the International Maritime Organization, or IMO, will ban ships from using fuels with a sulfur content above 0.5%, compared with 3.5% now. The new regulations are expected to cause the biggest shake-up in decades for the oil and shipping industries.

The current phenomenon of low refinery runs seems caused by greater numbers of refineries going offline this fall and taking even longer to return to ensure compatibility with the upcoming fuel rules.

The IMO rules state that only ships fitted with sulfur-cleaning devices—known as scrubbers—will be allowed to continue burning high-sulfur fuel.

Ship owners can also opt for other sources of cleaner fuel such as liquefied .

Failure to comply will result in fines or vessels being detained, which could affect vital requirements like insurance cover. The actual enforcement will be policed by flag and port states rather than the IMO.

Worry Over How Refiners Will Cope

One of the major issues is whether there will be enough quantities of compliant fuel around ports across the world, which is vital for ships planning sailings.

This is where the refiners come in. While they are taking inordinately long with their plant turnarounds to meticulously check that they meet every IMO requirement, once they return, their processing rates might be extraordinary, said analysts like Flynn.

“Refiners are going to have to ramp up quickly to avoid spot shortages and offset the potential of a major diesel price spike.”

Fuel complications aside, the oil tanker industry has also been bogged down by a meteoric spike in shipping rates after the sensational mid-September attack on Saudi oil infrastructure and a spate of other assaults on crude-carrying vessels in the Persian Gulf.

According to assessments of VLCC (Very Large Crude Carrier) spot rates issued by Clarksons Platou Securities, rates peaked on Oct. 11 at an average of $295,100 per day, before falling to $194,900 per day on Oct. 15.

Still, not all are convinced that the combination of the IMO rules, stiff shipping rates and geopolitical tensions will provide enough combustion for crude prices.

“ lack directional conviction. Strong resistance is still defined at $60 and $54.00 WTI. But the selling pressure is also not convincing. So, we are stuck in a range.”