It’s called the “poor man’s gold”. Yet, there’s nothing poor about performance this month, as it holds the crown for commodity returns in July.

On track to finish the month with a historic 30% gain in price—its biggest monthly increase in 40 years—silver is having what Philip Streible, Chief Market Strategist at Blue Line Futures, calls “the best of both worlds”—piggy-backing as a safe haven, while also soaring thanks to demand as an industrial metal.

It has been an incredible ride for silver, which fell towards 12-year lows, around $11.645 an ounce in March, as most commodities seized up during the height of the coronavirus crisis. Then, as gold took off thanks to the firepower of the stimulus unleashed by the Federal Reserve and other global central banks, silver latched on for the ride.

“People were originally playing gold for safety, and gold and the were trading together,” said Streible.

“When equities were up, gold would go down and the same thing with the dollar. And then the Fed got really aggressive in providing any kind of aid for any kind of business, and that’s when precious metals broke away and the dollar fell to a two-year low and free-fall mode.” 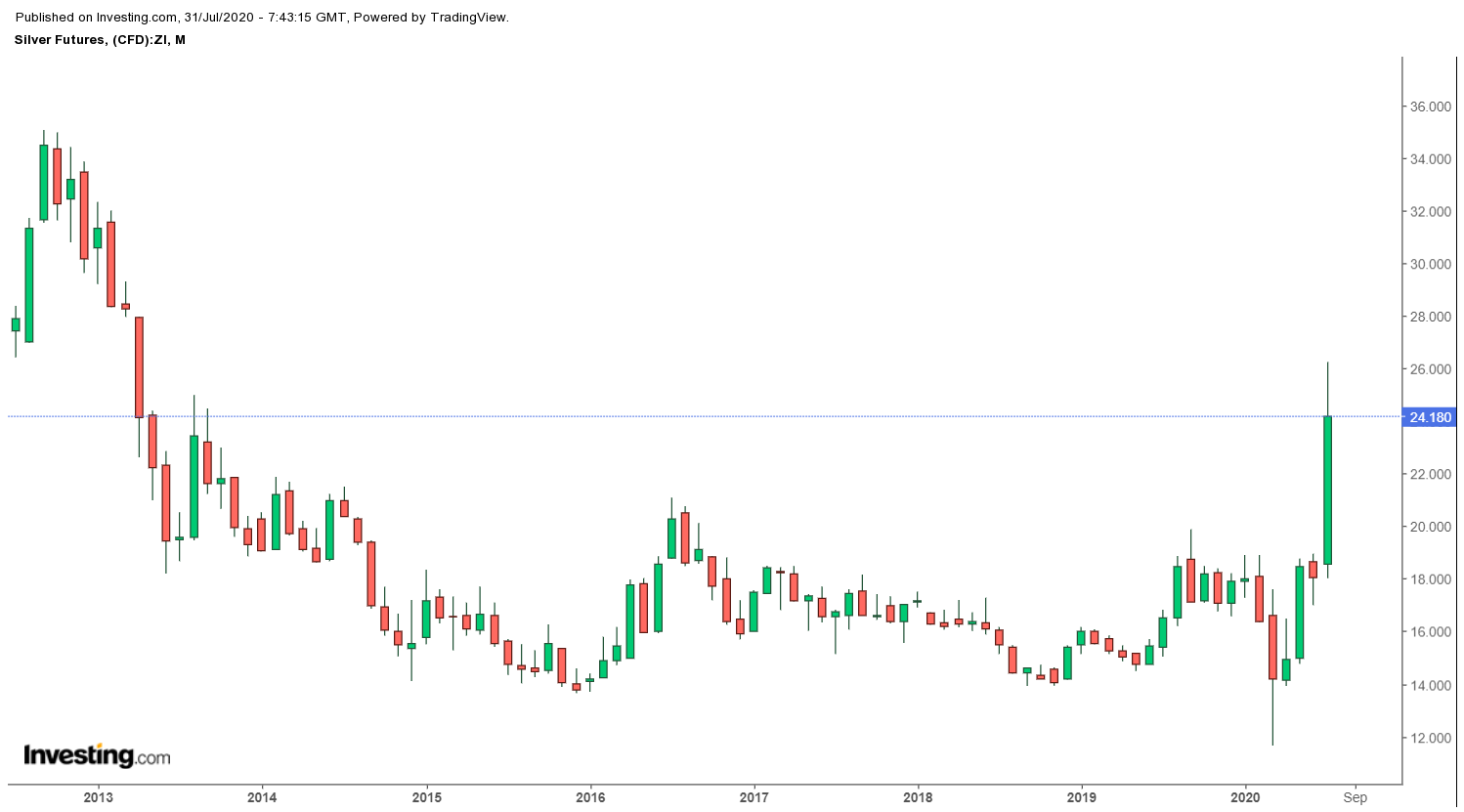 Silver’s gain in July, the biggest since September 1980, makes it the top-performing commodity in July, with US lumber futures a close second, while the laggards are predominantly grains—, and —along with , which is down by 4% and , which has lost 1% in value, despite huge coordinated production cuts by major exporters.

While gold can act as an inflation hedge, silver offered a lot more, said Streible.

“On the industrial side of things, one part of silver creates seven kinds of industries, from power generation to mining, trucking, metal refining, storage, product making and retailing.  And if Vice President Biden gets to the White House, he wants to do this kind of Euro-style vehicle emissions, and wants to fight climate change with lots of solar power, wind power, all types of things that require silver.”

A “realistic, inflation-adjusted” price for silver would be $30 an ounce, Streible said.

Streible said the only way that either silver or gold would get “sucker-punched” was if a safe, working vaccine was delivered to the market tomorrow.

“But you’ll need more than the vaccine. You’ll also need the Fed to unwind its lending programs and that’s not going to happen overnight. Even with the Fed on de-stimulus mode, gold will probably go back to around $1,750 to $1,800 for a start. The bears may not get the precious metals meltdown that they want.”

Christopher Lewis, an independent metals analyst who blogs at FX Empire, says it’s just not worth standing before the freight train is the silver rally:

“Quite frankly, this is a market that you should never consider selling, at least not anytime soon and considering that the Federal Reserve is looking to liquefy the markets going forward, it is a bit difficult to understand how somebody will think shorting silver is a good idea.”

“I think at this point the Federal Reserve will continue to add liquidity to the markets, driving down the value of the US dollar. That in turn drives up the value of precious metals and I think that is essentially what we are looking at here.”

Silver bulls got a bit of a scare on Thursday, as the price fell by almost 4%, caught up in a broad push lower across the commodities complex that swept even gold lower, albeit by a modest 0.6% But the downdraft barely lasted one session.

On Friday, silver was already up by nearly 4% on the day, while gold finally touched the magical $2,000-an-ounce mark for the first time in history. Even then, it has still not kept pace with silver’s gains so far this month. Gold has risen by almost 11%, its largest monthly increase since January 2012.

“Longer-term, I think that the silver markets (will) go much higher, but we may need to cool off a bit in order to attract more value oriented traders. I have no interest in shorting this market, regardless of what it does next. At the very least we need to consolidate a bit before picking up the pace again. Longer-term, silver is going to go much higher.”

He said any decline in silver was likely to be bought up quickly.

“It will probably fall rather hard at one point or another, but ultimately, we should see the buyers takeover. I think looking for dips makes the most sense and I would be especially interested near the $22 level. The $20 level underneath should continue to be very supportive, and if we would somehow get down there it is likely that we could find plenty of buying pressure.”

“Any pullback in silver is seen as an opportunity to buy rather than sell, in my view … Highs are not in yet in my view.”

“The gold/silver ratio is still below the 10-year average of 85.30. The trend is your friend.”

The gold:silver ratio is calculated by dividing the price of gold by that of silver. On Friday, the ratio was at 1:81, meaning it currently costs 81 ounces of silver to buy one ounce of gold. The ratio hit a record high of nearly 1:127 in mid-March, when gold was at around $1,704 versus silver’s 11-year low at $11.65. The measure has, otherwise, averaged 1:56 for decades.

“The silver ratio to gold is still way above what it should be,” Streible said. “It should go back to the average of around 1:60. I expect silver to continue outperforming gold on a relative basis.”

Disclaimer: Barani Krishnan does not own, or hold positions in, the assets he writes about.

Trump says he will ban TikTok through ...