Palladium has already made history at $2,000 and gold is back to within striking distance of $1,500, prompting investors to wonder about the other precious metal that matters to most: Will silver see a boon too before the year-end?

The answer seems to be no, because silver is caught in the on-off-and-now-on-again consolidation that has beset the metal since the end of summer.

The question that naturally follows then is: will 2020 be silver’s year?

And the very likely answer is yes, as multiple research houses, as well as independent analysts, are forecasting highs that could take silver back to the above $20 per ounce levels last seen in 2016.

“We, like others, continue to bet that silver prices will have a tremendous run to come,” James Anderson, a private bullion buyer and analyst said in a post on Tuesday.

His confidence? The Federal Reserve’s goal to “let inflation run above target” — a policy that will most likely drive hordes of investors into the arms of safe havens in 2020, said Anderson.

And silver will be one of those safe havens, as there will be plenty of inflation-hedge seeking money going around — and gold won’t be able to capture it all. 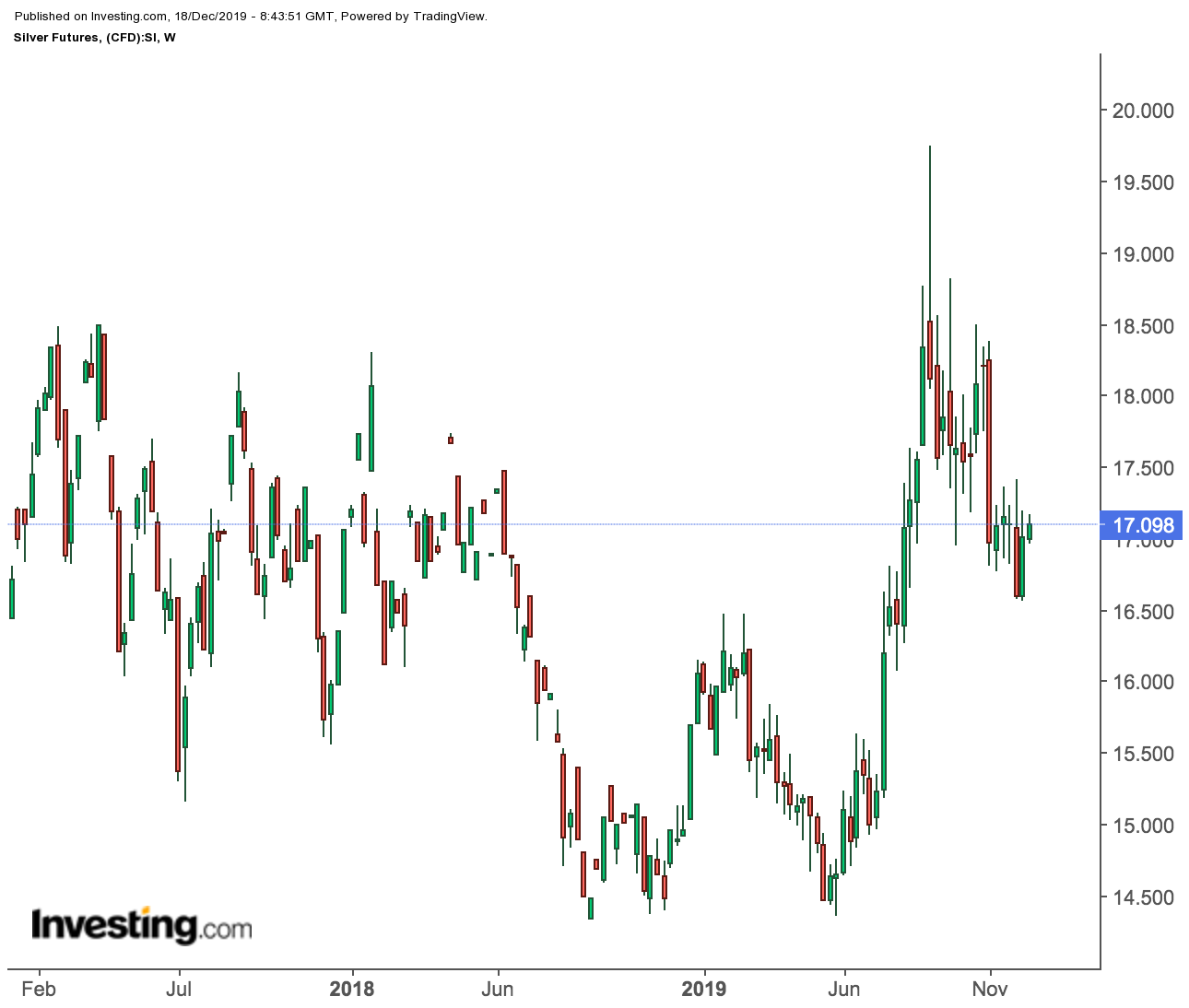 In Wednesday’s Asian session, hovered just in the positive at $17 per ounce — a level the market has pretty much held since recovering from November’s tumble, when it hit a three-month low of $16.76.

Palladium had an extraordinary event in this month’s power crisis in No. 2 producing country South Africa that further squeezed the autocatalyst metal’s supply, delivering a historic $2,000 per ounce that was higher than anything gold has managed.

Gold, on its part, has shown remarkable resilience too. As the No. 1 hedge to the dollar and global insecurities, it has managed to return to near the $1,500 perch it left in November on underlying concerns about U.S., U.K. and Chinese growth in the coming year.

Such concerns come despite the Fed’s decision last week to end U.S. rate cuts for 2019, followed by the landslide U.K. for Brexit-championing premier Boris Johnson and the agreement in principle for the phase one of the U.S.-China trade deal.

Unlike palladium and gold, silver has had no phenomenal event recently that exclusively catered to its fundamentals. Aside from its shiny properties that account for some of its demand as jewelry, silver is really an industrial metal that gets tagged as precious under the securitization of commodities.

But silver has benefitted by riding the coattails of the gold rally this year, though the gold-silver ratio — or the amount of silver one could get for an ounce of gold — is at one of its highest ever at 1:87. That’s a sign silver can gain further to close the gap, analysts say.

Silver has had a commendable year since coming off its 2019 highs. The of silver is up 11% on the year while the futures price is up 8%. Spot silver got to a three-year high of $19.65 in September just as silver futures reached $19.87. 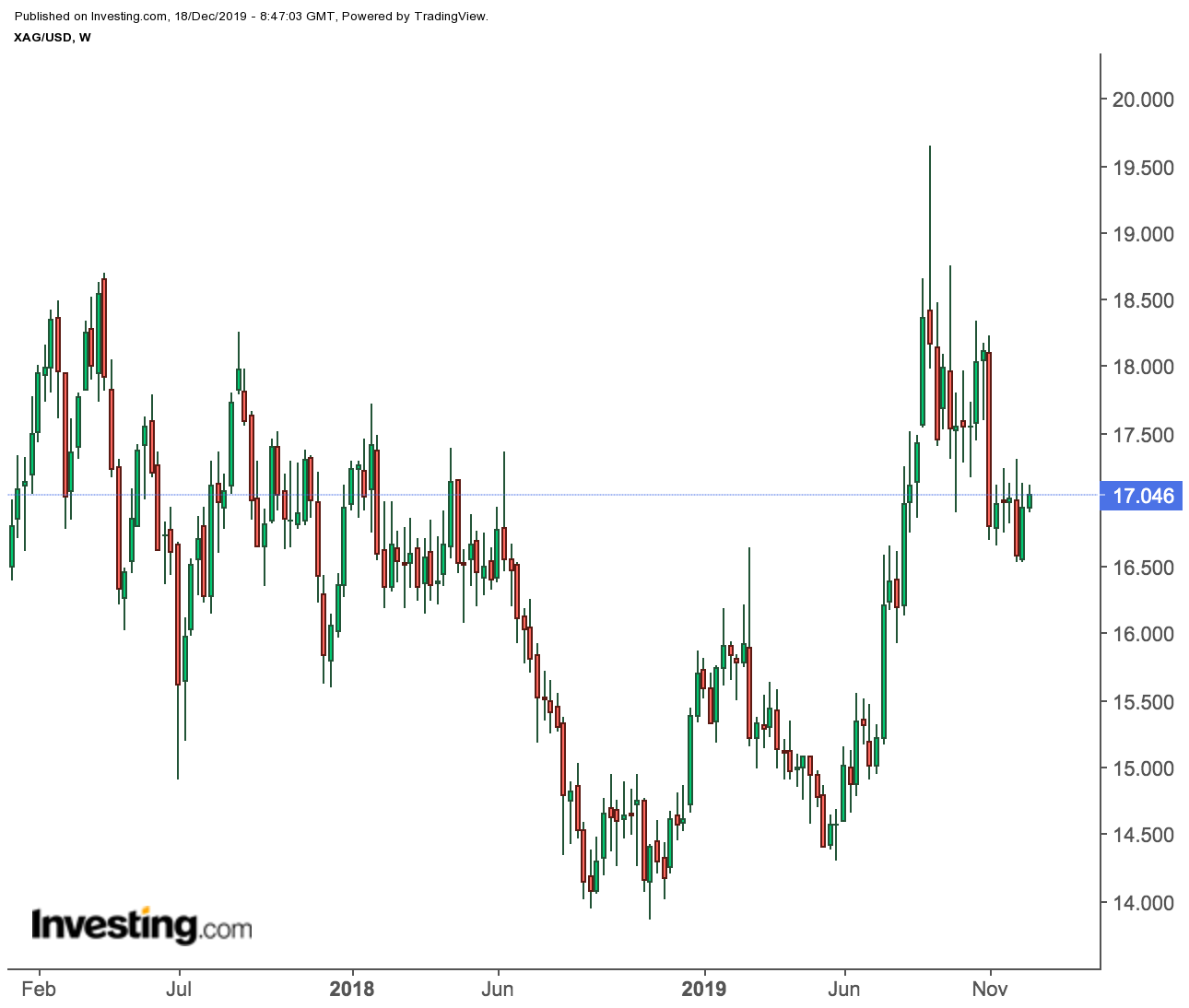 Investing.com’s Daily Technical Outlook has a “Strong Buy” recommendation on silver. It forecasts a top-end resistance of $17.30 for and $17.24 for spot silver.

Others have loftier targets.

The Dutch bank ABN AMRO projects silver to reach $18 an ounce by year-end after averaging $16.60 throughout 2020, precious metals bulletin Kitco reported on Tuesday.

Strategists at TD Securities saw silver’s potential peaking at around $20 an ounce next year, it said.

Kitco’s own in-house forecaster Jim Wyckoff projected a high of just below $21 for the coming year.

But he also cautions that one shouldn’t attempt to ride the silver bull market without being prepared for the volatility:

“See the silver rides in the 1970s and early 2000s for an idea as to how volatile it can get in silver market ups and downs.”