Silver: Is It Ready To Step Out Of Gold’s Shadow?

Having lurked under the imposing cover of Big Brother gold for what seemed like an eternity, silver emerged from gold’s shadows and into the limelight in July as prices of both precious metals hit astounding heights.

But it proved to be a brief escape.

Stymied in September by a risk-on mood across markets that also boosted —which became a haven of choice despite the gaping U.S. fiscal deficit and other economic ills from COVID-19—gold tumbled, and so did silver.

However, with the dollar getting crushed over the past week and the two metals taking off again on speculation that another coronavirus stimulus might see the light of day before the Nov. 3 U.S. election, the question is: Can silver forge its own path, independent of gold?

Yes, but not right away.

At Wednesday’s early highs in Asian trading, silver for December delivery on New York’s COMEX got to a near two-week peak at $25.28 per ounce.

Most analysts think silver needs to get well beyond $25.50 to break new ground and stand on its own.

”Given enough time, you also have to question whether or not we are going to see industrial demand as well, which is a major influence on what happens next with silver.”

And that’s the key for making silver independent: industrial usage.

What happened in the July-August stretch was an aberration in the world of silver.

As futures hit record highs of nearly $2,090 an ounce, futures of saw a 55% jump—outperforming the hike in gold by six-to-one.

Adding to the sudden spotlight on silver was the easing of COVID-19 restrictions in the U.S. and elsewhere which kick-started the economic recovery.

The nascent economic recovery in those two months gave the illusion that industrial demand for silver—used in jewelry, cutlery and coin-minting—was taking off.

September’s price crunch in precious metals, new spikes in coronavirus cases in the U.S., Europe and Asia and a resulting slowdown in economic recovery shows silver nowhere near a revolution in industrial demand—let alone standing on its own, without the cover of Big Brother gold.

So, where is silver’s current trajectory headed?

“From a big picture point of view, silver needs to settle above the 50-day EMA in order to continue its upside move. If silver fails to move above this resistance level, the risks of a sell-off will increase.” 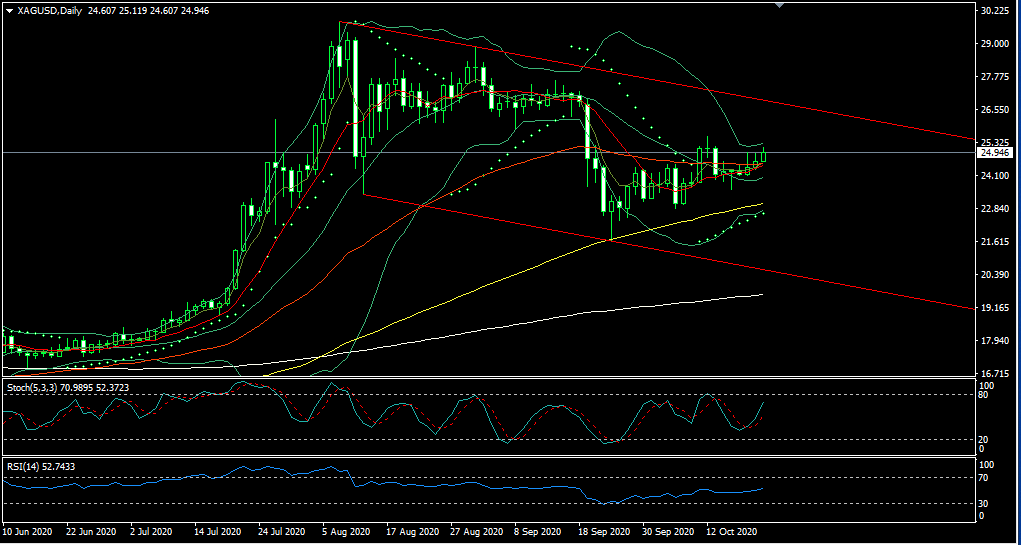 Independent analyst Sunil Kumar Dixit also points to the importance of keeping above the 50-Day EMA.

But he also says it’s more crucial to track gold’s movements to determine how far silver could go.

In an email to Investing.com, Dixit said:

Investing.com has a “Strong Sell” on spot gold’s 5-, 10- and 15-minute, and the one- and 5-hourly charts. The only “Buy” signals are on the weekly and monthly charts.

Investing.com also has a “Buy” signal on spot silver’s 15- and 30-minute charts as well as the hourly- and 5-hour indicators and the daily, weekly and monthly counts.

The deepest downside or support is at $13.04 while the highest resistance or bullish level is $35.03

Jeffrey Halley, Sydney-based analyst at New York’s OANDA, if the dollar continues to wilt, there was no reason for the precious metals rally not to continue.

“We have yet to see evidence that gold can stand on its own two feet as a haven asset in that scenario in recent times.”

That tells how well silver is positioned.