has had its shot, and now awaits its turn.

Hot on the heels of its more lustrous cousin’s ascension to of $1,800 per ounce, silver is targeting $19 per ounce, which, if it gets there, will mark a ten-month peak. 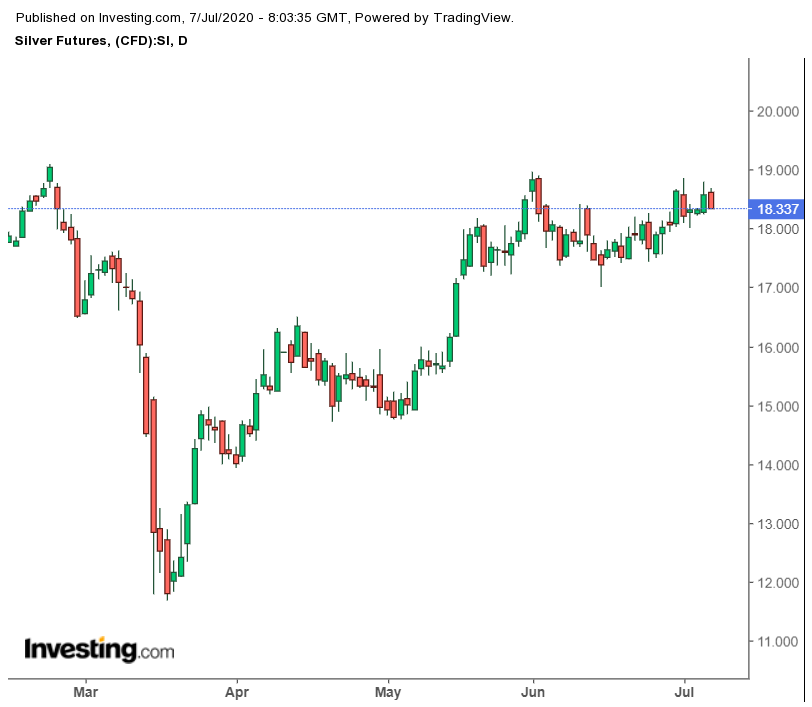 But like gold, if it crosses this , as many expect it to, in the coming days or weeks, silver will likely be fraught with volatility, and may need to unwind some of its advance first, in order to renew its push towards $20.

“It looks like the support underneath is going to continue to try to push this market above the $19 handle which has offered extraordinarily strong resistance,” said Christopher Lewis, an independent precious metals analyst and contributor to FX Empire.

“If we do break above the $19 level, it is likely that the market could go towards the $20 level, but at this point we still need to build up enough momentum to finally make that breakout.”

Lewis noted that the interesting thing about silver was that while it had been dragged higher by the momentum in gold, traders were still counting on the white metal to keep up with industrial demand—something that gold does not have to worry about.

Aside from jewelry-, cutlery- and coin-making, silver has always been central to the electrical and electronics industry and its biggest new source of demand is in conductors for 5G technology.

“Industrial demand for silver is still a bit of a question, so I think that might be one of the main reasons that silver is dragging a bit,” said Lewis. “However, the markets look likely to continue finding buyers on dips, and I do believe that the $18 level underneath will continue to be supportive.”

“The $17 level after that offers plenty of support as well, and I do think that we are grinding to the upside overall. With this in mind, I think that we are in a market that you should be buying dips, not necessarily trying to get too cute at the top and start shorting. If we break down below the $17 level, then we can start to have a different conversation, but right now it does not look highly likely to be a concern.”

Analysts at London-based Metals Focus also had a favorable outlook for silver:

“Once gold eventually breaks out to challenge its all-time high at $1,900, silver should reassert its (own) ability to outperform gold, with the white metal expected to surpass the $20 mark in late-2020, along with a fall in the gold-silver ratio to the low 90s.”

The gold-silver ratio, calculated simply by dividing the price of gold over silver, was at a three-week low of around 97 at the time of writing, as gold traded at just under $1,795 an ounce versus silver’s $18.55.

Silver-backed exchange-traded products (ETPs) have now expanded by over 25% since New Year, with the world’s largest silver-backed ETF—the iShares Silver Trust (NYSE:)—growing by 2.2% last week, meaning an increase of 330 tonnes of silver inflows, bringing total holdings to a fresh record of 15,614 tonnes.

Net demand to buy physical silver on BullionVault set a three-month record from March to May, growing total client holdings by 25%, Atsuko Whitehouse, head of Japanese business at the firm, said in a commentary.

In 2019, total global supply outstripped demand by 973 tonnes, according to the World Silver Survey 2020 published by the Silver Institute, marking the fourth annual surplus in a row.