Should The EIA Raise Its Oil Data Tracking Game To 21st Century Standards?

A week ago, I wrote in defense of the U.S. oil supply-demand data put out by the Energy Information Administration each Wednesday.

I argued specifically about the production estimate in the EIA’s Weekly Petroleum Status Report. Although that number was officially guesswork, it was published by the custodian of the world’s most transparent and researched data on oil production and storage. With no competing or authoritative data of its kind, the market had to accept it as the truth, I said.

To buttress my argument, I leaned on a study made by Oil & Gas Investments’ Keith Schaefer. He concluded that the weekly production estimate was almost always validated by the EIA’s Petroleum Supply Monthly report. To verify that, I did my own math and found a perfect match between the July monthly report and the production estimates averaged that month by the EIA. Case closed, I said.

That was before another analysis on the matter that came forth this week from Price Futures Group’s Phil Flynn.

Before we go further, it must be noted that Flynn is an analyst with a bullish bias towards prices, who has suggested on numerous occasions that the EIA’s methodology in calculating its weekly production is suspect at best.

After the EIA report for the week ended Oct. 18 ran the same record high of 12.6 million barrels of production per day for the third running week—it still hasn’t changed that for a fifth running week now—Flynn wondered where the agency was getting its numbers. The argument he made then was simple: the U.S. was collapsing dramatically, reaching April 2017 lows, yet the EIA was publishing record high production estimates.

‘Ignorant? Or Having An Agenda?’

This week, Flynn’s argument was more explosive: He wasn’t just questioning the EIA’s production estimate but was also taking aim at its crude inventory balance—the holy grail of the Weekly Petroleum Status Report.

Flynn asks the EIA or anyone who believes in its numbers: “Are you ignorant or do you have an agenda?” 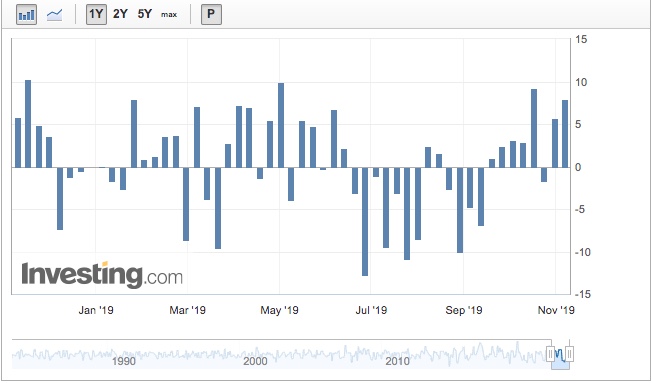 His point? The EIA reported a stunning 7.9-million-barrel increase in crude oil inventories for the week ended Nov. 1—five times more than expected by the market.

Flynn starts off by questioning the massive drop in crude exports cited for the week. According to the EIA, those exports fell from 3.327 million bpd to just 2.371 million during the week to Nov. 1. If the 956,000 barrel difference was multiplied over 7 days, it would total 6.692 million barrels in all, Flynn argued.

“Based on some of the best estimates and tanker tracking firms, the reality is that exports last week actually surged. Not just a little but perhaps as high as a record 4.4 million barrels per day.”

Adding fuel to Flynn’s fire was the defense mounted of the EIA by its Petroleum Market Analyst Mason Hamilton. Taking to Twitter amid criticism of the agency’s latest report, Hamilton argued that weekly EIA import and export data were not based on actual physical movements.

“Import/Export volumes only appear in EIA data when the associated paperwork has cleared customs. Track all the boats you want—it’s the paperwork that matters.”

He added that those harping on EIA weekly import/export data without noting these facts were simply displaying ignorance or had an agenda—setting the theme for Flynn’s posting.

Unlike Flynn, I do not advise clients on positions in energy or any other commodities. I certainly do not have a bullish view on oil; on the contrary, I’d argue that it should be trading at under $50, but that’s another article altogether.

Yet, I totally understand Flynn’s frustrations with the EIA. He concedes that the EIA “does a great job most of the time” but maintains that its data is “basically worthless on a weekly basis.”

Worse, the EIA has “admitted that their methodology is flawed” through Hamilton’s tweets, said Flynn.

“Yes, I am ignorant as to why the EIA puts out data based on a system that may mislead business and traders and I have an agenda to try to get the most accurate data possible for my clients and for the good of the economy overall.”

“It’s clear by Mr. Hamilton’s own admission that it is not about the actual imports and exports. It’s about paperwork. He wants me to acknowledge it. I do acknowledge that.”

“I also acknowledge that the private sector is doing a better job of monitoring imports and exports. I believe the EIA should use the tactics of the private sector to give the taxpayers, who pay for this data, the best most accurate data possible so that they can operate their businesses in the most efficient way they can as opposed to waiting for some bureaucrat to stamp a piece of paper.”

Should Someone Else Do The Job?

Flynn said he understood that the oil market has changed faster than the EIA’s ability to keep pace with.

“The fact is the EIA has had a more difficult time changing from a world where the U.S. was mainly an oil importer to now a major exporter.”

Other challenges the agency has had to grapple with is the evolution of shale oil and a more varied and complex blend of crude, as well new classifications of associated gas, natural gas and other products.

“Yet one change that would be helpful is to modernize their procedures for counting imports and exports. That would be a big plus for everyone on the globe.”

I agree that market and data transparency are most important in the trading of any securities, whether you’re a bull or bear.

In this case, the EIA seriously looks like it has to raise its data tracking game to 21st century standards.