Safe-Haven Gold: Time To Take Profit Or Add To Your Portfolio?

Investing in is a pure bet on the economy. The precious metal hit a six-year high this month as central banks globally eased their monetary policy to deal with the slowdown in growth triggered by the U.S.-China trade war.

The events of the past six months have supported a bull run in gold, which is considered a safe-haven asset during times of economic turbulence. The U.S. and China trade dispute escalated, the European economy slowed, Brexit became ever messier and tension in the Middle East flared up after the attacks on the largest oil-producing nation, Saudi Arabia. 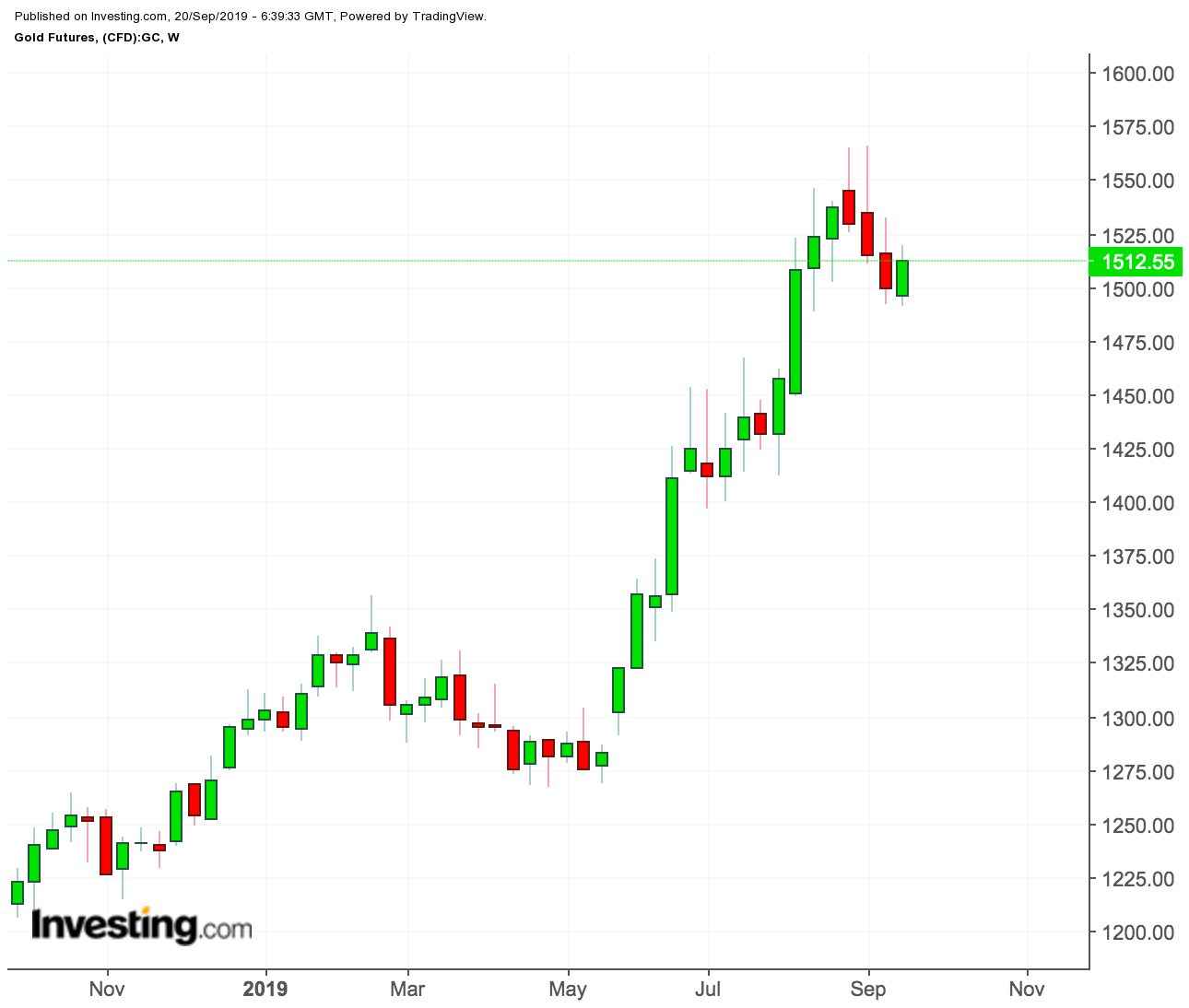 These macro setbacks raised the possibility of a recession and forced the U.S. Federal Reserve to start cutting interest rates. On Sept. 18, the Fed acted again and lowered the borrowing cost by another quarter of a percentage point, .

Encouraged by these signals, gold bulls moved their cash to gold and miners, sparking a rally in mining stocks. BlackRock’s iShares MSCI Global Gold Miners (NASDAQ:), has returned almost 14% in August, more than any other unleveraged stock fund in the U.S., data compiled by Bloomberg show. 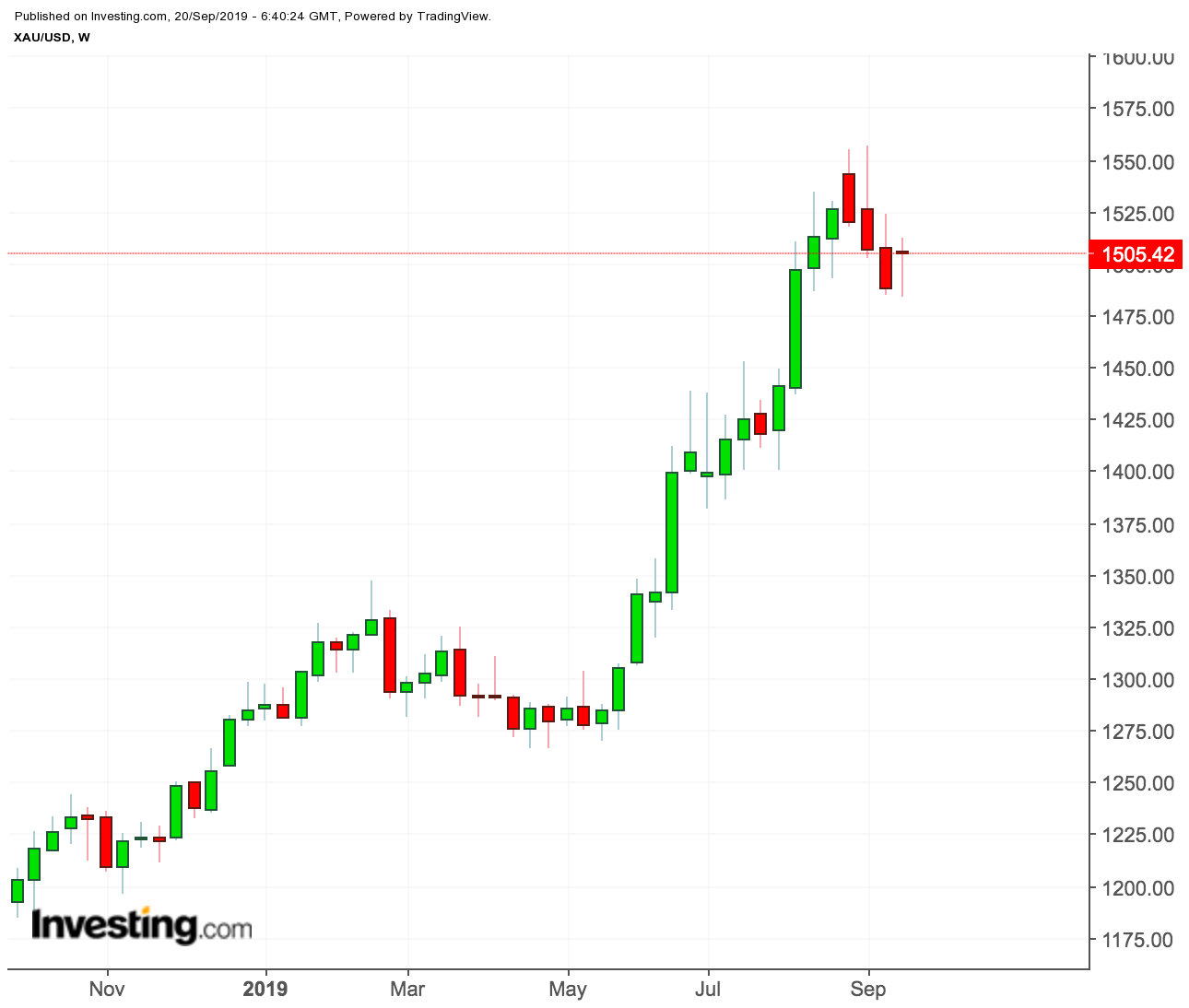 Gold at a Record High?

Going forward, however, the big question for investors in gold assets is whether this rally has legs, or we are at the peak of this bullish trend. According to a recent note by Citigroup’s analysts, the outlook for gold is quite healthy as they see a possibility of prices rallying to a record above $2,000 an ounce in the next two years.

That rally, according to analysts including Aakash Doshi will be supported by drivers such as the rising risk of a global recession and the that the Federal Reserve will reduce U.S. interest rates to zero.

“We expect prices to trade stronger for longer, possibly breaching $2,000 an ounce and posting new cyclical highs at some point in the next year or two,” they said. If that level was reached, it would exceed the record of $1,921.17 set in 2011.

But the risks to this bullish scenario are equally strong. Both U.S. and China are back at the negotiation table in October and the markets are returning to normal on hopes of a resolution to their dispute.

On the economic front, the U.S. economy is still showing signs of strength, helped by robust consumer spending, and strong job creation. That was the main reason why the Fed failed to signal that more cuts were coming. FOMC officials are divided over whether more cuts will be needed, with some of them thinking Wednesday’s change was itself a cut too far.

In this highly uncertain economic environment, it’s probably not a bad idea to keep some exposure to gold in your portfolio. If the gold rally is sustained and prices continue to climb higher, gold miners who have taken steps to cut costs and capital expenditures over the past few years stand to benefit the most, making them an attractive alternative in any long-term portfolio.

In this group, we like Newmont Goldcorp (NYSE:), now the world’s largest gold miner, and the Canadian producer Barrick Gold (NYSE:). These are among the producers who learned a hard lesson during the metal’s last bull surge. 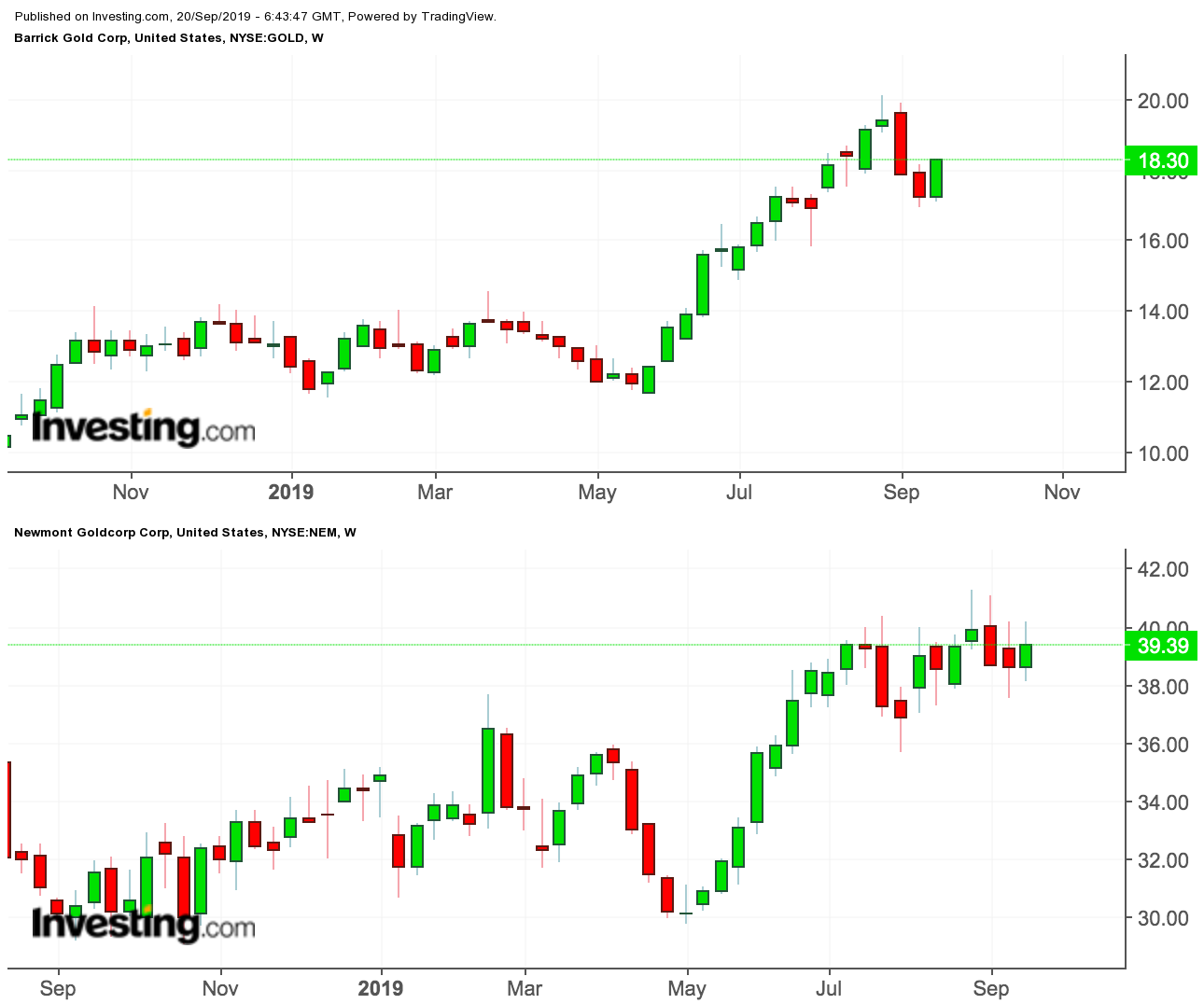 Prices in the spot market reached a record $1,921.17 in 2011, but the rally collapsed quickly as historically low interest rates and quantitative easing by central banks fueled gains in the equity market and economic growth accelerated. By the end of 2015, prices had tumbled about 45%.

Now that bullion is back in favor, many miners are playing it safe by going for organic growth and optimizing existing assets. They’ve gone through sustained cost cutting, debt reduction and boosts in productivity after the last slump to lure back investors.

Investing in gold-linked stocks, such as BlackRock’s Gold Miners ETF (NYSE:) or top gold miners, is a risky proposition due to many opposing dynamics that could push the precious metal in either direction. That being said, gold’s haven status is intact and it can provide a great hedge when other assets are plunging. In the current uncertain economic environment, the precious metal offers a prudent way to diversify your risk and add some safety to your portfolio.

China, US had ‘constructive’ trade talks in ...