Record High For Gold? Charts Not Promising But Longs Count On Grand Year

Gold has already risen almost 20% on the year. Can it go up another 25% before the year is out?

It’s a pertinent question because that’s what it would take for the yellow metal to write a new record high. 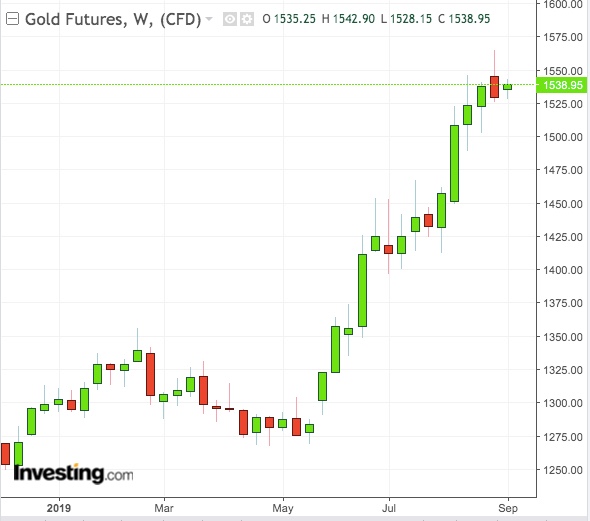 With just four months to go before the year comes to a close, there’s little probability gold will rise that much. Yet, longs are betting against bets that this will be a phenomenal year for the cherished safe haven—meaning anything could be possible.

That third consecutive-month surge brought total assets to 2,453.4 tons as of Friday, Bloomberg reported on Monday, after the addition of an aggregated 154.1 tons in June and July.

In Monday’s European trade, as U.S. markets were shut for the Labor Day holiday, gold futures settled at $1,538.10 in electronic trading.

Investing.com’s Daily Technical Indicator has a “Strong Buy” recommendation on , projecting a top-end resistance of $1552.65 that could catapult the market back toward a test of the $1,565 level.

The indicator also has a “Strong Buy” recommendation on bullion, projecting a top-end resistance of $1543.67 that could catapult the market back toward a test of the $1,550 level.

While there’s no certainty that either gold or bullion will hit all-time highs before the year is out, the trade war and a host of other tensions—primarily the U.S.-Iran conflict—are keeping gold bugs’ hopes for a major payday in 2019 alive.

Gold has basically thrived on bad news this year. And there’s plenty of scope for disappointing news ahead, from the ongoing trade war to potential for dismal European manufacturing or retail sales data.

Case in point were the 15% U.S. tariffs on Chinese goods that came into force on Sunday, affecting 91.6% of apparel imports, 68.4% of home textile merchandise and 52.5% of footwear imports.

Markets, meanwhile, continue to price in an additional in rates at the U.S. Federal Reserve’s next , slated for Sept. 17-18. Lower interest rates tend to support gold by reducing the yield on bonds, which compete for the capital of risk-averse investors.

Minneapolis Fed president , New York Fed President and Chicago Fed President speak at events on Wednesday that could shed light on the Fed’s direction for rates.

However, not all are optimistic about the gold rally continuing.

Mahmoud Alkudsi, a strategist for the precious metal, noted that gold closed in the red for the first time in four weeks last week.

“It’s worth noting that a top failure swing occurred after the Relative Strength Index (RSI) peaked in mid-August above 70; then in August 25 failed to exceed its previous peak. Few days later, the oscillator broke below previous trough indicating to uptrend loss of momentum.”

“Further close above the high end could resume bullish price action toward the vicinity of $1,625-27.”