The biggest bull market of the year in is shaping up, with huge stakes riding on an intense freeze forecast in the eastern two-thirds of the United States — the country’s most-closely watched heating market.

After tacking on 18% last week to give October a net gain of 13%, benchmark gas futures on the New York Mercantile Exchange’s Henry Hub are headed for yet another positive week, rising 4% in the three sessions to Wednesday. 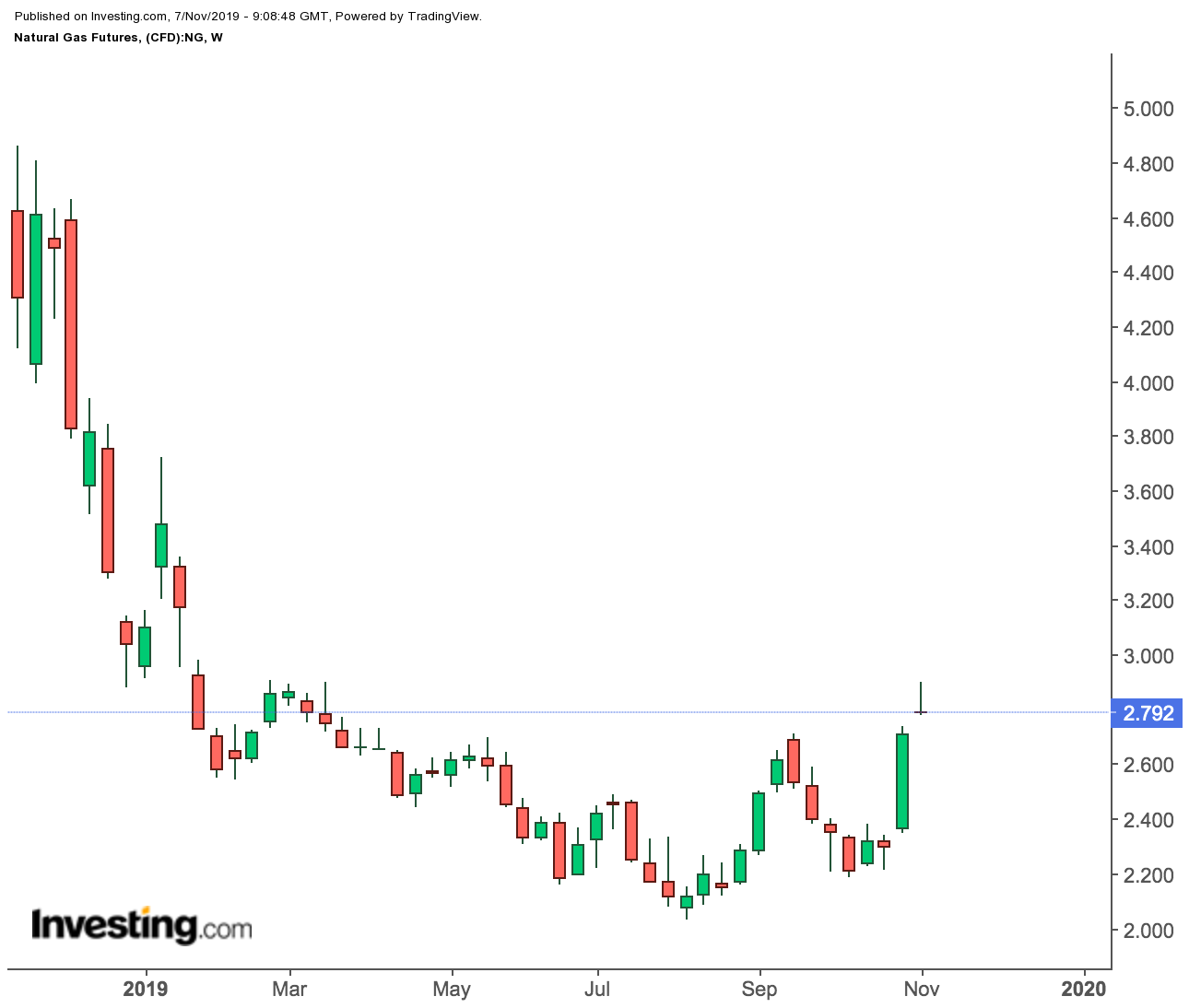 Underscoring the bullish market, Thursday’s from the U.S. Energy Information Administration at 10:30 AM ET (15:30 GMT) could show a build of just 45 billion cubic feet for the week ended Nov. 1 — versus 89 bcf for the previous week to Oct 25.

The sheer cold that led to a near 50% drop in gas injection levels in just a week is exactly what has got the market all hot and bothered since late October.

But even if the injection levels turn out to be higher than forecast, they are unlikely to take away much of the market sentiment — that seems to be the consensus.

As Scott Shelton, energy futures broker at ICAP in Durham, North Carolina, explained in his daily note on gas Wednesday, “data has taken a back seat to weather.”

So, just how intense a cold are we looking at?

According to ICAP’s Shelton, weather models overall are still showing a “very cold forecast for the next 6-10 days; then the below-temps moderate from very cold to just slightly above normal by the end of the 11th-15th day.”

Dan Myers of Gelber & Associates, a Houston-based risk consultancy on natural gas, concurs: “One thing that hasn’t yet shown signs of fading is the impressively cold weather pattern in the eastern two-thirds of the U.S. over the next fifteen days.”

“Forecast revisions have caused continual revisions of demand and storage expectations in recent days and we are only beginning to get our hands around what the upcoming period will hold.”

Dominick Chirichella, director of risk and trading at the Energy Management Institute in New York, says a warning shot of anomalous cold will sweep through most areas later this week. Chirichella adds:

Last week’s weather itself was colder-than-normal. Thomson Reuters’ data provider Refinitiv points to 102 heating degree days (HDDs) for the week to Nov. 1, versus a 30-year average of 80 HDDs for the period. HDDs measure the number of degrees a day’s average temperature is below 65 Fahrenheit (18 Celsius) and are used to estimate demand to heat homes and businesses.

And Refinitiv says gas production in the lower 48 U.S. states averaged another record high at 94.3 bcf per day last week.

Thus, if the EIA reports a smaller gas injection for the week despite such record production, it speaks for the price strength in gas, analysts say.

Investing.com’s Daily Technical Outlook was still calling a “Strong Buy” in natural gas at Wednesday’s settlement of $2.83 per million metric British thermal units on the Henry Hub. Resistance levels were cited at $2.87, $2.92 and $2.94.

But some analysts were already thinking of $3 gas, citing even higher gas consumption levels in the coming weeks.

“Air mass modification will begin during this period, but any real warming trend will wait until later in November.”