We live in the strangest of times where a 24 hour period can feel like 24 days.

Just yesterday, I that I wasn’t sure if Donald Trump’s acknowledgement of a potential recession from the would help gold as a safe haven, since two U.S. within two weeks haven’t done anything for the yellow metal.

But the events of the past 24 hours make me wonder if I have to recant that view.

That’s because on Tuesday, the President of the United States fired a of economic stimulus rockets at the pandemic. The biggest of these carried a $1 trillion capital-infusing warhead, designed to take out the economic decapitating forces of the scourge before it claims more American businesses and jobs.

Brief Pop, Before Return To Red

Responding to Trump’s stimulus, precious metals from to and opened up in Wednesday’s Asian trading, joined by base metals from to , in what appeared to be their broadest rally in a week. But after a brief pop, the metals fell back into a sea of red by late afternoon in Singapore. 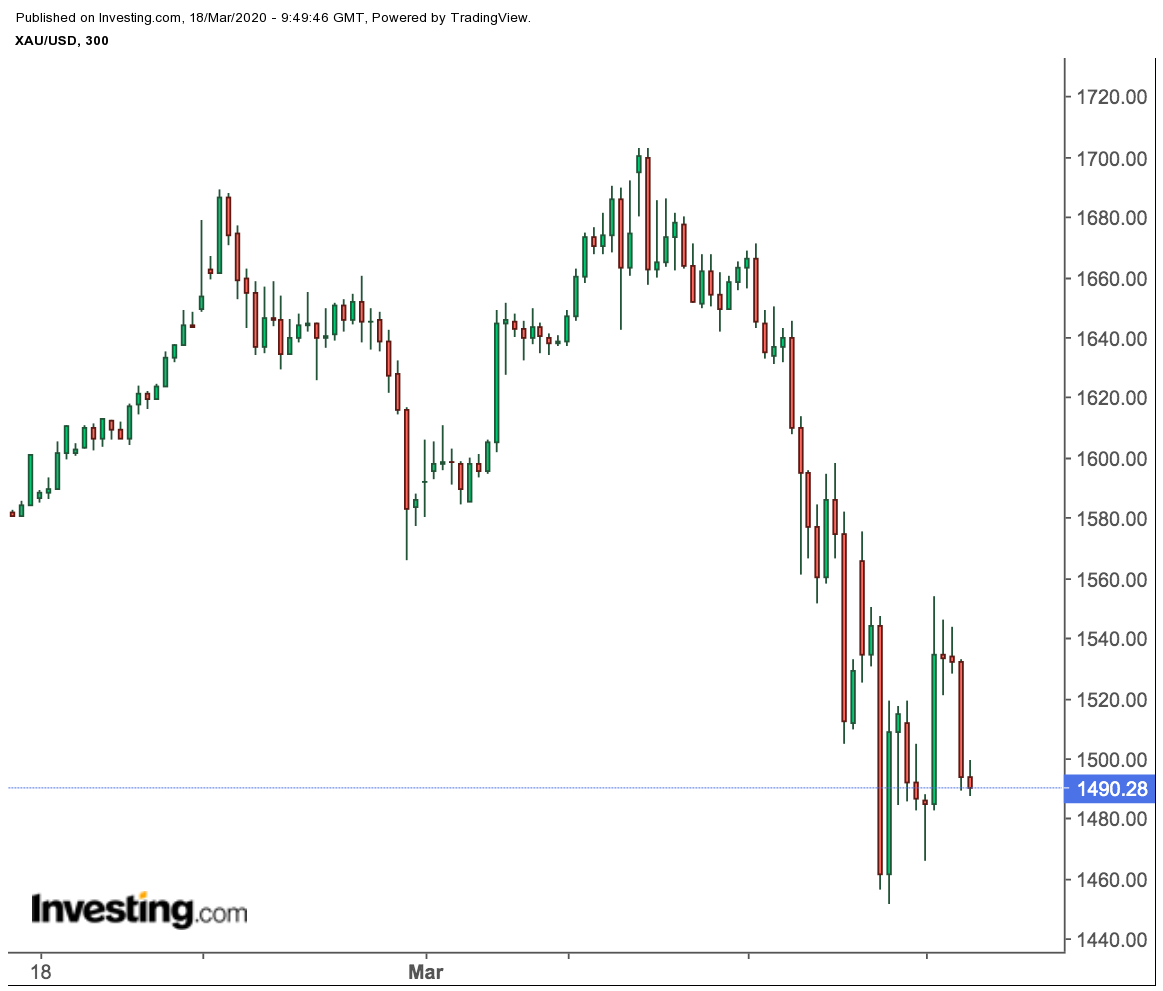 Tuesday’s outperformance of gold, after the measures announced by the Trump administration, made some analysts think that the worst may be over for the yellow metal, which lost 9% last week, its most in a week since 1983. 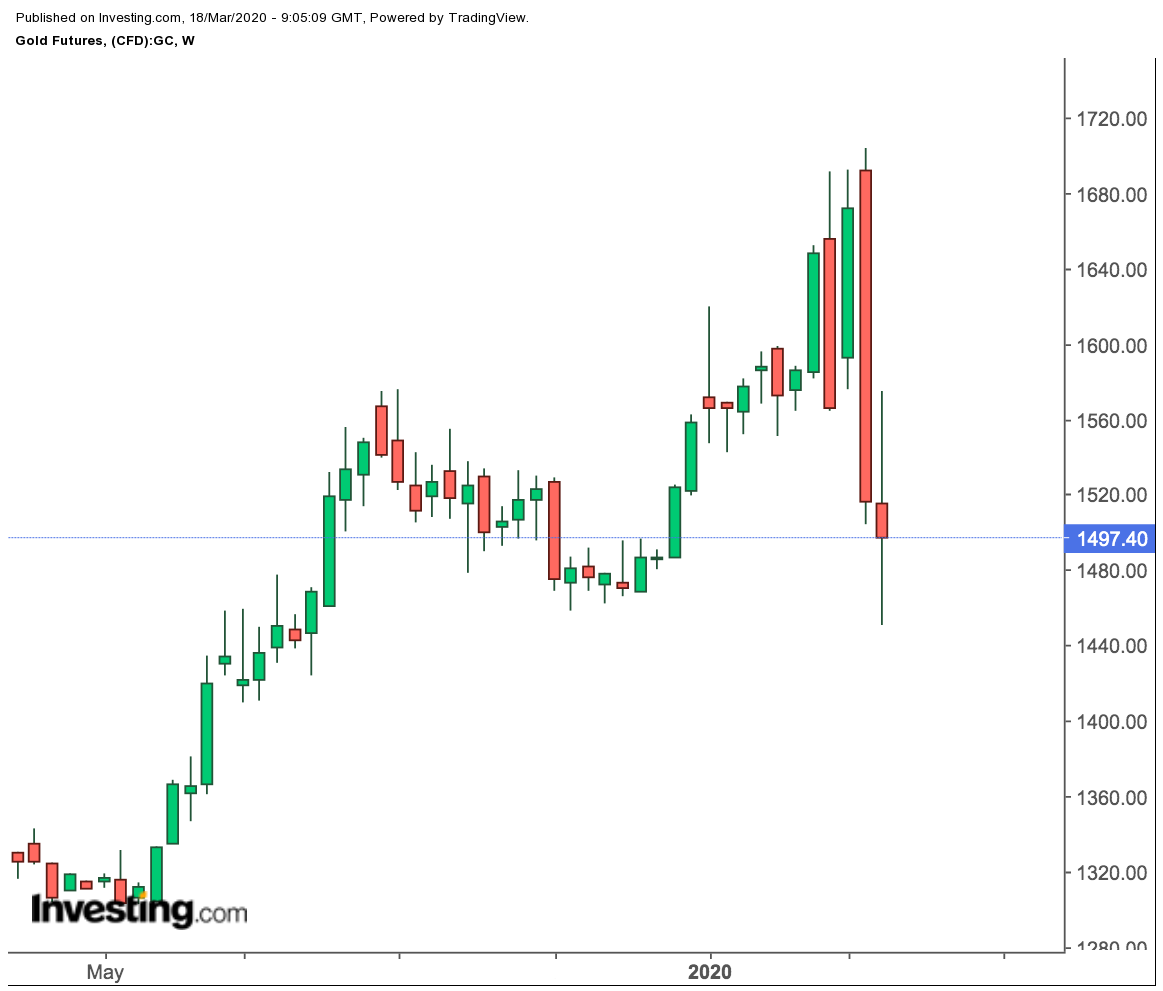 But on Tuesday, COMEX gold futures went from negative 1% to settle up 3.5% in New York, the first positive close in six days. It also recaptured the $1,500-per-ounce berth, which was critical to the confidence of its most bullish backers.

“You’re probably going to see a much more constructive price action towards at least $1,600 and maybe beyond,” Ed Moya, senior market analyst at online trading platform OANDA, predicted after gold’s triumph on Tuesday.

Moya based his reasoning on the fiscal response expected from the Trump administration in coming months that he said will provide “the necessary catalyst to snap gold’s recent weakness, that has seen its safe-haven go away in the scramble for cash.”

Just what did the administration announce?

The stimulus measures, laid out by Treasury Secretary Steve Mnuchin at a news conference with Trump, included:

* A special purpose vehicle created by the Federal Reserve to support the U.S. commercial paper market with up to $1 trillion to avoid a cash crunch in the credit market.

* An estimated $850 billion package, under negotiation with Democrats in Congress, to help the economy continue spending if hit by recession.

* Deferral of some $300 billion in tax payments to the Internal Revenue Service for both American families and businesses.

* Checks in the mail for all Americans in the next two weeks to mid-April.

If that’s not enough, the Federal Reserve, has already cut 1.25 points off U.S. rates over the past two weeks, bringing them virtually to zero.

Despite such rosy hues, there were still dark clouds hovering over the economy.

One came from Mnuchin’s warning — reportedly made behind closed doors to Republican senators from Trump’s party — that the coronavirus could drive U.S. to a staggering 20% from current 50-year lows of 3.6%.

While Bloomberg said the treasury secretary used that as a throwaway line to convince party cadres to support his pricey rescue solutions for the pandemic, its leak nevertheless reverberated with some investors as deeply as the after-glow of the stimulus announcements.

That probably explains why were down more than 830 points, or 4%, in Asian hours Wednesday. The drop indicates a return to the negative for Wall Street’s broadest index when trading opens in New York later in the day. It has been a nerve-wracking week for the , which witnessed its worst-ever plunge of 3,000 points, or 13%, on Monday before Tuesday’s 5% rebound. 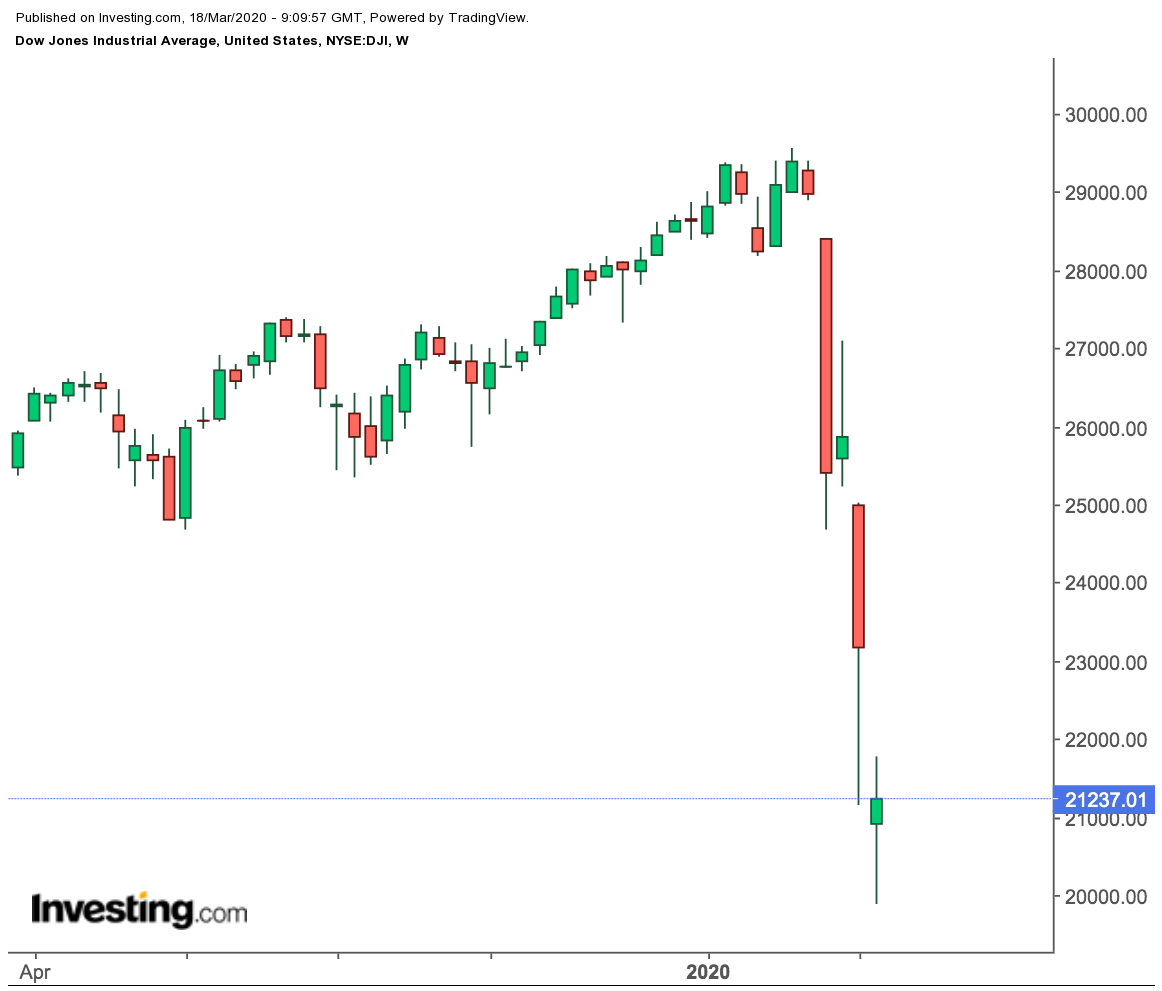 Contrary to their typically opposing trades, stocks and gold have been joined at the hip this year in the pandemic-driven crash.

Due to gold’s relative value — it is flat on the year while the Dow is down 25% — the yellow metal has become an ATM of sorts for investors with losses and margins to cover in equities. Gold’s super liquidity, which makes it easy to dump at a whim, is as much a bane for the metal as a boon.

Based on charts action, right now it’s a fight down to the wire between the pandemic and the stimulus.

Over the longer term, the monetary rockets launched by Trump could send gold into the orbit of record highs at $1,900 and above.

From where the market is now, the first defense is less than $100 away. And after last week’s near $200 dive, which happened at the pace of an elevator car plunging without cables, it seems like $1,400 would be a dubious defense for gold too.