Palladium Investors May Need To Rest Their Crowns For A While

Heavy is the head that wears the crown.

And for investment advisors who once urged buyers to rush headlong into palladium, the burden of witnessing the daily twists and turns in the reigning crown of the precious metals is enough to prompt some to call for an exit.

Among those blowing the bugle against the star auto-catalyst metal this week was Mike Seery of commodities consultancy Seery Futures in Plainfield, Illinois.

Seery acknowledged that palladium has been the strongest of precious metals for quite some time—since Jan. 16 to be precise, when hit $1,373.65 per ounce in intraday trading to become pricier than gold for the first time in 16 years. 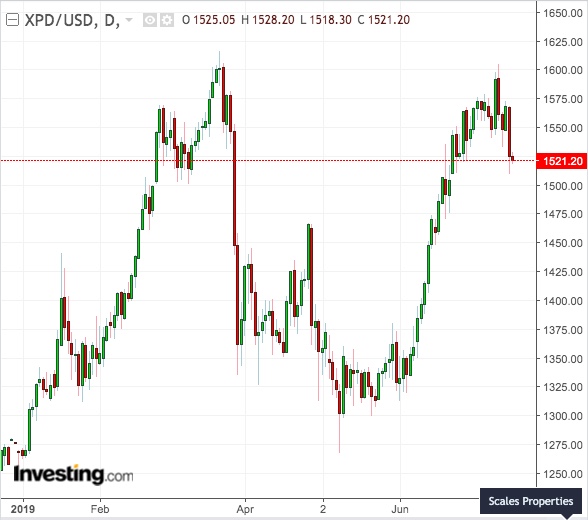 Spot palladium appeared unstoppable for a while after that, reaching all-time highs of $1,616.30 on March 31 on a perceived supply squeeze in the metal used for purifying auto emissions in gasoline engines.

Then, unexpectedly, palladium’s world crumbled: China’s automotive sector began slowing amid its trade war with the U.S., and major components of the global economy began tanking as well. Spot palladium sank to a four-month low beneath $1,300 in May.

Investing.com’s Daily Technical Outlook has a “Neutral” call on spot palladium, projecting top-end resistance at $1,619.01 and bottom at $1,440.36.

Does that mean that investors should still exit?

Seery thinks so, saying that the good times in “everything comes to an end”—and that includes palladium for now.

“Volatility in palladium certainly has increased over the last several days as we’ve experienced about a $100 trading range in just 4 days.”

“So sit on the sidelines; wait for better chart structure to develop, like the rounding bottom chart formation that took place in June and worked very well.”

Seery was also quick to add that he was “certainly not recommending any type of bearish position.”

“I still think higher prices are ahead, but as a trader you must have an exit strategy.”

“I have bullish recommendations across-the-board, except in gold, as I still think this sector is beginning a secular bullish multi-year trend.”

Although palladium prices are expected to push higher through the rest of the year, CPM Director of Research Rohit Savant said there were signs of the market peaking as industrial demand could take a hit from perceptions of a weak economy.

Analysts expect platinum to have a supply surplus of about 31,000 ounces this year due to a slowing global auto sector.

Last year, the metal had record automotive demand of 8.5 million ounces, up from 5.8 million in 2010. Precious metals consulting firm Metals Focus said then in a report:

“Coupled with constrained mine production growth, this has resulted in palladium demand outpacing global supply over much of this decade.”

While not every analyst is forecasting a recession, the general view they paint is that of a pessimistic macroeconomy.

Christian acknowledged the selling pressure in palladium since the March highs but added that it wasn’t significant enough yet to lead a herd charge out of the metal.

“Palladium is not a bubble market. Investors … are waiting to see just how high prices will go before they start really selling.”