Forget . If you want a commodity that’s directionally solid—going mostly higher—ahead of the U.S. election, you might have to look no further than .

With just about four weeks to the Nov. 3 presidential fight between Donald Trump and Joe Biden, markets are bracing for all sorts of outcomes, ranging from the most contested election in U.S. history to one where the winner might only be known months after the ballots are cast, due to the delayed tallying of postal votes. To call this uncertainty would be an understatement.

Gold is typically be the hedge for investors . But with the yellow metal exhibiting inordinate volatility in recent weeks, some may be getting queasy about dipping their toes in there, let alone taking sizeable long or short positions.

Case in point: Hours after Biden’s better-than-expected debate performance against Trump on Tuesday night, gold moved lower and the higher. Many had expected the reverse as a vote for Biden was seen as a vote against the dollar, which has become the default hedge for all that the Trump administration represents.

Palladium, largely used for purifying the emissions and performance of gasoline-powered cars, is the one of the few major commodities barely affected by cross-market gyrations triggered by the dollar in recent weeks.

The , or DX, which tracks the greenback’s performance versus six currencies, was back at the bullish 94 handle on Wednesday, gaining 0.1% after losing a cumulative 0.8% over two previous occasions which sent it to the 93 zone.

The strong DX has basically tripped up longs in gold since bullion and futures of the yellow metal but hit record highs above $2,000 an ounce.

FX Street noted in a commentary issued early Wednesday that worries over “election outcome delay knocked down … risk sentiment and refueled the US dollar’s demand as a safe-haven”. It added:

“It remains to be seen if the dollar sustains the bounce (and) … plays a key role in gold’s price movement.”

While show a gain for this week, at 1.4%, it follows last week’s drop of 5%, which was the yellow metal’s worst weekly performance in six months. Gold futures are also down more than 4% for September, after a 0.4% decline in August. 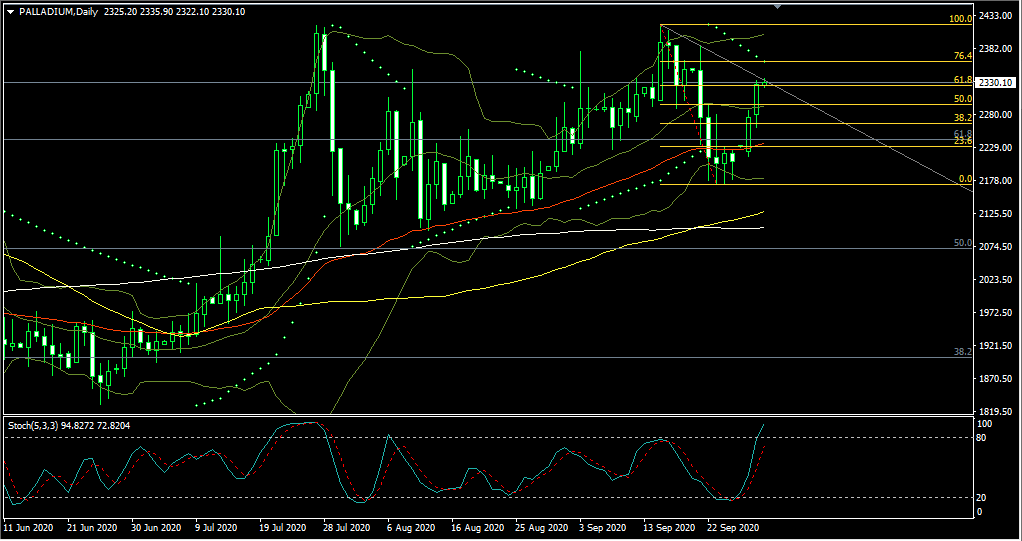 Palladium, meanwhile, has been in its zone, oblivious to the dollar. With Wednesday’s $2,333 level an ounce reached in pre-New York trade, are up 4.4% on the week and 2.6% so far for all of September. If the upward momentum is retained till Friday, it will give palladium the sixth weekly gain out of seven. Palladium futures have also risen three straight months since June, gaining 20%.

Investing.com’s study shows palladium will likely be least impacted by the dollar’s idiosyncrasies in the near-term.

The autocatalyst metal began attracting buyers from lows of around $2,170, remaining in demand as the metal progressed to the $2,300 handle. It appears to be gearing up for a test of the $2,400 handle, if it can take out near-term resistance at $2,365. 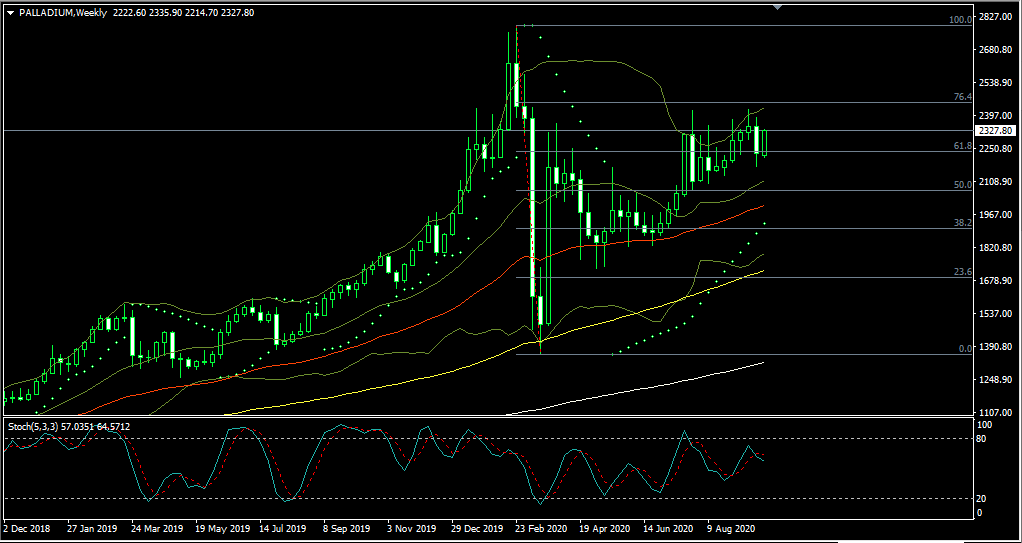 “Taking out $2,365 on the upside hints that the rally can continue. A daily close above $2,450 will strengthen the confirmation of bullish move, while defending $2,235 the 50-Day EMA on the downside is an essential condition to continue the rally further.”

Conversely, a daily close below $2,170 would negate the upside in palladium futures, said Dixit.

“Stochastics for palladium are on overbought territory in daily time frame, while weekly charts stochastics caution about potential rejection on the resistance.”

Minnesota mail-in voting: What to know