OPEC Meeting: 3 Potential Results And What They Could Mean For Oil Markets

As the December of OPEC and OPEC+ gets underway in Vienna, these are three potential outcomes:

Even before arriving in Vienna, the Iraqi oil minister proposed that OPEC consider deepening its production cuts by 400,000 bpd. Iraq’s reasoning: the current cut of 1.2 million bpd is not sufficient given forecasted demand weakness in the first half of 2020.

However, since several key OPEC members have failed to cut production to their existing quotas—with Iraq being a notorious overproducer—support for deepening cuts will be hard to drum up. There is zero expectation that Iraq would comply with deeper cuts and while it is unspoken, it was clear that Saudi Arabia and UAE would likely shoulder the majority of any additional cuts

The Iraqi oil minister seemed to acknowledge that when he later backed away from his earlier support for deeper cuts after meeting with the Kuwaiti and Emirati oil ministers in Vienna on Wednesday.

In fact, it is unlikely that gained much ground from this talk, as most of the price increase on Wednesday can be attributed to positive news on the U.S.-China trade deal front. However, there are still some analysts who believe that OPEC must make deeper production cuts to deal with potential oversupply in the first half of 2020. 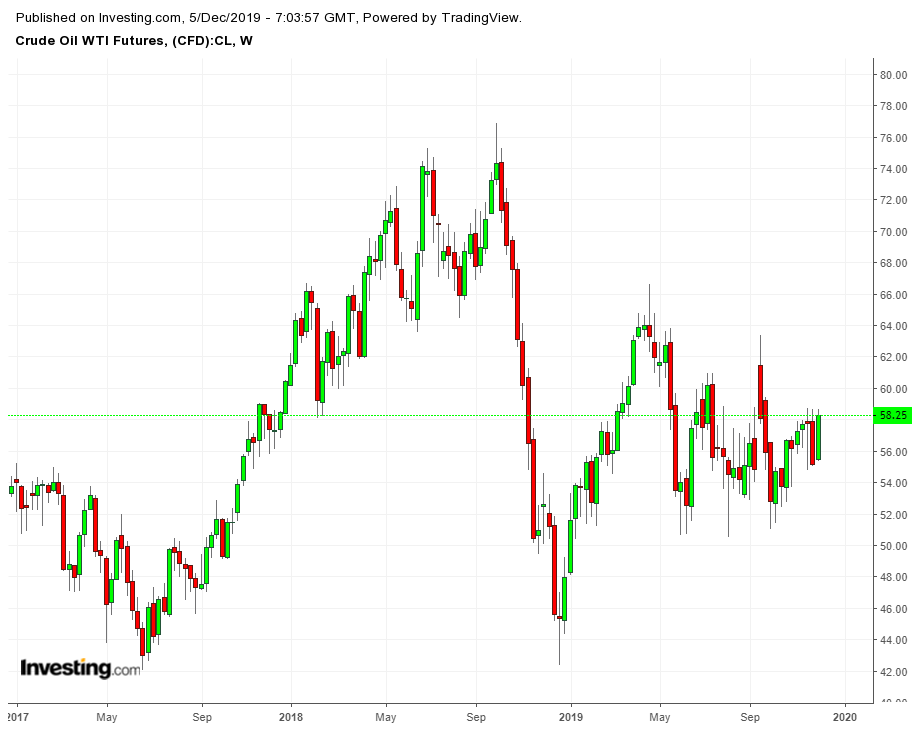 Extending current production quotas is the most likely scenario, as there is already near-consensus within OPEC and OPEC+ to continue with the status quo. In fact, OPEC as a unit has been under-producing the amount specified in this agreement, because Saudi Arabia made extra cuts, the U.S. sanctioned Iran and Venezuela’s oil industries and a few smaller producers are experiencing natural declines.

Assuming an extension is the outcome of this meeting, the most contentious question for OPEC and OPEC+ ministers will be the time frame—three months, six months, nine months or one year.

Last June’s meeting saw producers rollover the same deal for nine months as opposed to the usual six. The most recent proposal for a year extension came from Iraqi oil minister and garnered support from Venezuela, which is technically exempt from the deal due to U.S. sanctions on its oil exports. OPEC could agree to a year extension with a review of oil market conditions at the end of the first half of 2020 and an option to revise production if supply and demand are tighter.

However, OPEC+ is an important factor in this matter and Russia hasn’t weighed in on its preferred time frame. There is no doubt that Russian oil minister Alexander Novak’s view will be significant and could even be the determinant in the event of a disagreement within OPEC.

A three month or nine month extension may make more sense, because those options would return the timeline to coincide with the biannual meetings.

Saudi Arabia’s new oil minister, Abdulaziz bin Salman is attending his first OPEC meeting as head of the Saudi oil ministry. Although he didn’t say anything of note to reporters when he arrived in Vienna, he has been signaling that Saudi Arabia is tired of other members cheating—a normal occurrence in OPEC since 1973, when OPEC first became influential in the oil market.

When the OPEC and OPEC+ production-cut deal was first forged, the group established the Joint Ministerial Monitoring Committee (JMMC) to keep tabs on participating countries’ production rates. Several countries, including Iraq, Nigeria and Russia, have been called out for over-producing. OPEC has also enlisted several third-party sources to track member nations’ production and compliance. These organizations have issued monthly reports detailing which countries over-produced, under-produced or hit their targets exactly. None of this seems to have made a difference for the habitual cheaters.

Now, the Wall Street Journal is reporting that Saudi Arabia is using the best weapon it has to bully fellow OPEC members into compliance: threatening to flood the market with oil. As discussed in last week’s column, Saudi Arabia could put an additional 510,000 bpd on the market without over-shooting its own OPEC quota of 10.3 million bpd of production. A marked increase of this much oil could send prices down. This, of course, would hurt other producers more than Saudi Arabia, because Aramco can produce oil for significantly less per barrel than any other company.

While some believe Saudi Arabia won’t take this chance because the kingdom wants to maintain high oil prices to bolster the upcoming Aramco IPO, a publically traded Aramco actually incentivizes Saudi Arabia to produce more oil in order to show revenue growth. Thus, the market should take Saudi Arabia’s threat to open the taps seriously. Not only is Aramco capable of producing much more than it is currently producing, it is not a bad strategy for the company. One possible scenario that could emerge from this OPEC meeting is a shorter extension, championed by Saudi Arabia, with a threat that Saudi Arabia will open the taps if cheaters do not curb their production.

The first scenario seems increasingly unlikely at this point, so market watchers should prepare for a consensus to extend the current production cuts for some time frame, keeping in mind that the threat from Saudi Arabia to increase its production is a real possibility which could send prices down.