After months of quiet, palladium is erupting into record highs again, giving profit-chasing precious metals investors an outlet just as gold collapses from the exhaustion of a five-month long rally.

Palladium, which serves primarily as an emissions-reducing agent for gasoline-powered engines, has risen about 33% in price this year.

After a slump between March and May, and another weak spot in July through August, palladium is back to ruling the roost in precious metals. It is the “old kid on the block” making new highs, as gold looks on. 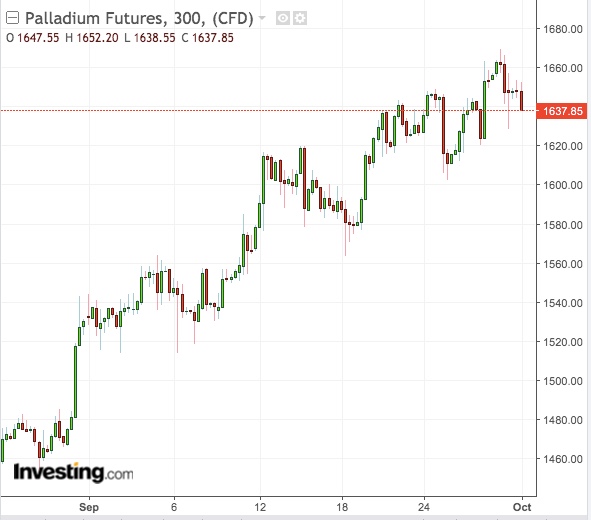 In September alone, palladium futures gained more than 9%, about the same as the whole of the third quarter.

, reflective of physical trades, hit a record high of $1,702.20 on Monday before ending in negative territory.

Analysts attributed palladium’s outbreak to fears of a supply deficit in the auto-catalyst metal and speculation that the United States could get a trade deal concluded with China—the world’s fastest growing car market—despite the perennial back-and-forth in their negotiations.

“Hard as it may be to believe, palladium’s run is hinged on the U.S.-China trade deal getting done.”

“The market, of course, knows the odds for such a deal, and that it alone cannot sustain palladium’s run higher. I’ll lean more on the supply deficit story for the rally to continue.”

Specialty metals refiner Johnson Matthey has projected a deficit of 127,000 ounces for 2019, after last year’s record surplus of 375,000 ounces.

“There is strong fabrication demand but a good part of this is speculative demand from investors who expect prices to rise and also people who are getting out of gold, silver and platinum: because those prices are falling, some of them are shifting into palladium.”

“There’s a lot of concern that there isn’t a lot of palladium around; a big part of that is people who own the metal don’t want to sell at current prices. They want to see how high the price goes before they keep their profits.”

Bottom Falls Out Of Gold

Palladium’s surge also comes as the bottom appears to have fallen out of gold, which plumbed to two-month lows this week after holding firmly above the $1,500 level since early August. 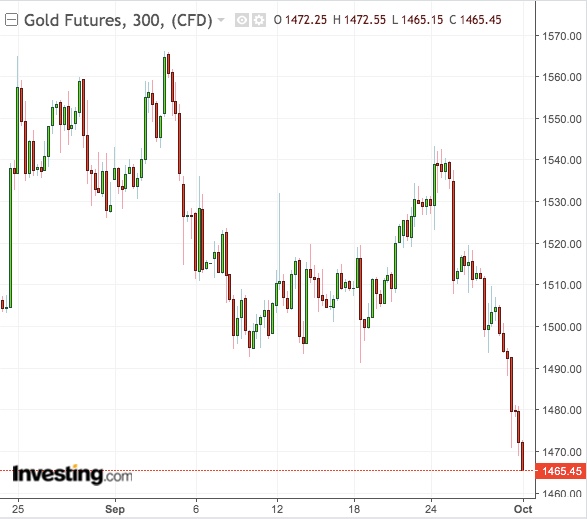 Analysts said gold’s breakdown was triggered by its slide beneath the Sept. 18 low of $1,490.70 on Comex, which broke a key support.

“We have a bearish head-and-shoulders pattern now and could go as low as $1,450 if the momentum stays.”

Gold was also undone by a rampant dollar. The , measured against a basket of six currencies, surged to four-week highs of 99.113 on Monday as it became the preferred hedge again for investors seeking an insurance againnst the U.S.-China trade war.

That aside, the yellow metal also lost some of the geopolitical risks that had been prevalent over the past two weeks, especially that in , after Saudi Arabia’s quick action to restore output following the Sept. 14 attack on its energy infrastructure. Riyadh’s stance not to engage militarily with Iran, which it has blamed for the attack, has deprived gold of any war premium risk from the attack.

…Though Some See It Holding Firm

Yet, Canadian banking-broking group TD maintained its call for $1,600 gold by the year-end, saying the combination of some 75 technical analysis trading signals suggests that 43% of signals were still tilted toward long gold.

“In fact, chart signals in gold present the most compelling case in the cross-asset basket of securities tracked herein, with the yellow metal holding the crown for the highest absolute percentage of signals pointing long on a 60d moving average basis.”

“Our positioning analytics suggest that the weakness in prices is more likely to be driven by a minor shakeout in length than any major changes in positioning, given that most length is still comfortably sitting on hefty profits.”

China’s fake meat trend is on the ...