The OPEC and OPEC+ meetings are a month away, but talk in anticipation of the events is already influencing oil prices. Both and dropped almost 1.5% midday Nov. 6 on news that OPEC isn’t exactly considering deeper production cuts, despite earlier reports. 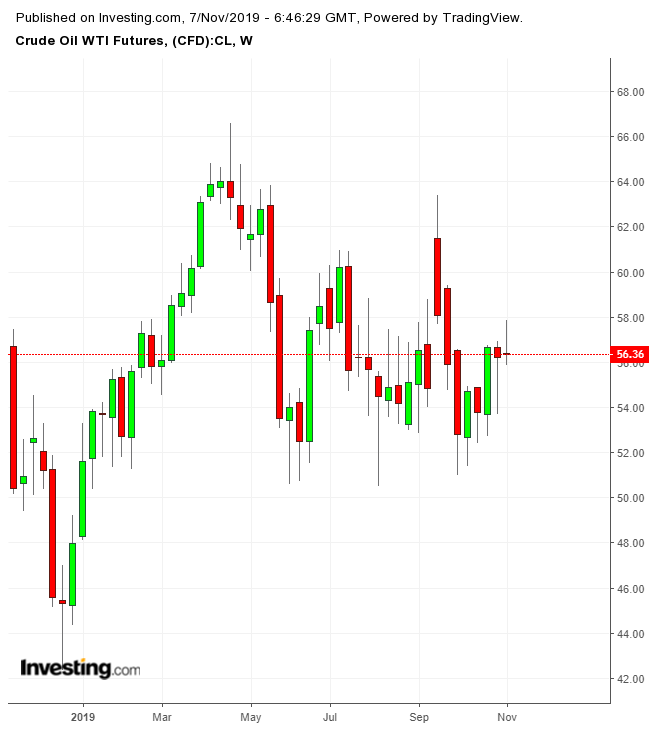 The question of whether OPEC and its friends will implement deeper cuts to the current quota system at the December meeting was first raised by OPEC Secretary General Mohammed Barkindo in the beginning of October when he told reporters that additional production cuts would be on the table at the next OPEC and OPEC+ meetings.

Traders should be cautious about taking this talk seriously. The truth is that changes to the current quotas are extremely unlikely and there is no reason to believe that OPEC producers can or will agree on further cuts to the production quotas at the December meeting. Even without the possibility of additional cuts, the groups’ cohesiveness is tenuous.

The language used to describe “production cuts” over the next month should be under close examination as the meeting approaches.

Yesterday, Prince Abdulaziz stated that he intends to forcefully push OPEC to take measures to reduce the amount of oil on the market, by pressuring serial over-producers—Iraq and Nigeria, especially—to finally cut their output in compliance with the current quotas. However, this was described and reported simply as “production cuts.”

Technically, a reduction in output is a production cut, but not in the sense that the quotas will be changed, rather producers are coming into better compliance with existing quotas.

This is not the first time the new Saudi oil minister made misleading statements. At the press conference Prince Abdulaziz held about the attacks on Abqaiq and Khurais, there was a great deal of confusion over his use of the terms “output” and “production” and just how much oil Saudi Arabia would be producing for export compared to how much it would be drawing on stored oil to export.

The use of vague terms to imply meaning that is not there seems to be becoming a trend. Market watchers will need to decipher the language being used and whether OPEC is discussing cutting production quotas or ways to reduce oil output within the current system.

Another key issue to watch are the protests in Iraq. On Oct. 8, I wrote that if protestors did not see their demands met, they could make moves against government oil infrastructure without harming any facilities. By simply preventing exports from loading or workers from showing up at facilities and ports, protestors could impede on oil revenues for the government.

These risks appear to be coming to fruition as protestors start to affect Iraq’s oil faculties. Depending on how the protests progress, this could subject Iraq—which is still over-producing its quota—to involuntary production cuts.

Other Factors To Watch

OPEC producers are each playing games to better position their interests and agreement on further cuts is unlikely.

Iran is an exception and is in favor of production cuts because it is exempt and any cuts from other members could only be a benefit.

Saudi Arabia has been producing more but staying within its quota because it is refilling stored oil that was drawn down by the attacks on Aramco facilities. Many are wondering if the Aramco IPO—slated to happen just a few days after the meeting—will impact Saudi Arabia’s policy in the organization. Rather than push for additional cuts across the board, Prince Abdulaziz says he will push very hard for members to adhere to the existing agreed-upon cuts to take barrels off the market.

Iraq, one of the notorious overproducers, is feeling the impact of protests on its oil industry and this could result in involuntary compliance.

The bottom line: don’t expect OPEC members to agree to production cuts at the December meeting. Reduction in oil output is more likely to be driven by other factors.