Oil May Be A Bright Spot For The U.S. Economy Right Now

Right now, discouraging economic data and negative indicators seem to be coming from everywhere. Some recent examples include: a major downward revision of the number of jobs created last year in the United States; falling yields on U.S. Treasury bonds; a report that German business confidence is at its lowest point in seven years; and data showing lower than expected numbers for Chinese consumption, investment and factory production. Many economists see these as indicators for a looming recession.

However, amidst all of this depressing news, the U.S. market is a bright spot. Production, consumption and export data all reveal a robust industry which inidcates positive signals for the overall U.S. economy.

, oil inventories declined by 10 million barrels last week. This is a major draw. Most analysts predicted a draw of only about 2 million barrels, though the data earlier released by the indicated that 11 million barrels of oil had been taken out of storage. 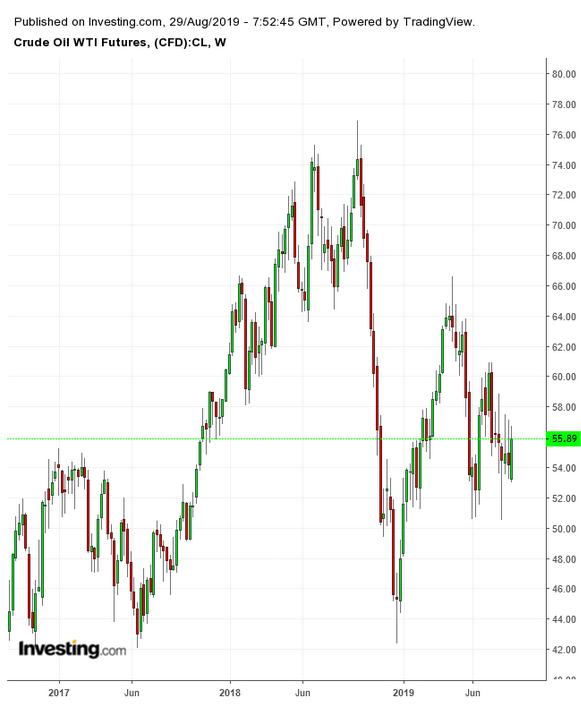 Oil prices jumped on Tuesday when the API data was released and, after the EIA data confirmed the large stockpile draw on Wednesday, we saw up nearly 1.9% and WTI rise 2.8%.

use wasn’t the only positive economic indicator. The EIA report also showed that stockpiles of and (used for diesel fuel) declined.

Gasoline consumption in the U.S. has been strong over the summer, in contrast to other gloomy economic indicators. In fact, strong fuel demand has confounded economic analysts who believe the U.S. is heading towards a recession. Many of these analysts jumped on last week’s EIA report, which indicated that demand in the U.S. could be weakening. That report showed that gasoline stockpiles increased by 312,000 barrels and that fuel demand declined by 306,000 barrels per day.

However, the very strong demand numbers revealed by this week’s EIA report are evidence against the argument that the United States is on the verge of a recession. Not only is domestic fuel consumption strong in the United States, but the U.S. also exported 3 million barrels of oil per day last week. This is a sign of global economic strength.

All of this comes despite worsening trade relations with China. At the same time, U.S. oil production reached a new record high of 12.5 million barrels per day. New pipeline infrastructure in the bottlenecked Permian region is also facilitating the movement of more to the market.

Of course, one bullish report from the EIA does not erase countless economic indicators pointing toward economic slowdown. However, the EIA reports on oil production and consumption have generally promoted a bullish stance throughout the summer. Strong consumer demand for fuel in the United States should give those forecasting an imminent slowdown a reason to pause.

According to many oil analysts, the physical oil market is tight. In fact, prices should probably be higher given how tight supply and demand is right now. Speculation about future demand weakness and impending recessions are keeping prices lower at the moment. It’s important to keep an eye on oil and other economic data to see whether this economic slowdown is really on the way or whether it’s just the current market narrative being fueled by anxiety.

As Gold Breaks Out, Consider Participating In ...