prices continue to drop from 12-week highs after the EIA weekly inventory report showed a small surprise build of 822,000 barrels, a recently growing trend with U.S. stockpiles. The overall report was very bearish as demand fell off a cliff and total stockpiles climbed to the highest level in seven months. Today’s initial selloff eliminated a good part of the Saudis surprise cut announcement from last week. With a steady decline with rigs, its no surprise U.S. crude production fell 100,000 from the record highs to 12.8 million bpd. Refinery utilization also came down 1.3ppt, a miss of the expected rise of 0.7ppt, implying demand could be decreasing.

Oil remains vulnerable despite the OPEC + promise for deeper cuts as today’s oil report implies domestic demand is dwindling, the overall global demand outlook remains uncertain and with the backdrop that the first half of the year will also see stronger oil output from Norway, Brazil and Guyana. 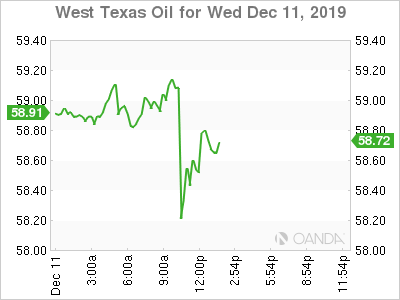 Fed not moving off sidelines unless inflation ...