Nickel, The Unsung Commodities Hero Of 2019, Could End Year At Highs

After a phenomenal summer, nickel has gone quiet suddenly, exhibiting sluggish market action that belies its stature as the year’s biggest winning commodity.

Yet, with top producer Indonesia deciding this week to temporarily stop nickel ore exports ahead of a full ban to be implemented next year, the question is whether another short-term price ramp-up is likely in the raw material used to make coins and electric-vehicle batteries.

Nickel Up About 57% On The Year

At current pricing of around $16,750 a tonne, on the London Metal Exchange are up about 57% for the year, driven by a collapse in supply of the metal in LME warehouses after huge withdrawals.

In comparison, futures of , the most valuable precious metal now, are up around 48% after hitting record highs above $1,800 earlier this week. 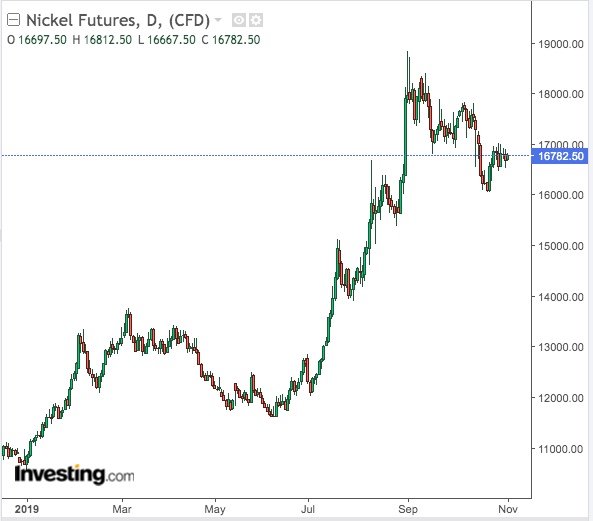 After blockbuster monthly gains of 6%, 15% and 23% between June and August, the steam in the nickel rally has evaporated though. September’s 4.4% loss was the market’s first in four months. But after a modest 2.5% decline in October, nickel is starting November in the positive.

Now, investors are wondering if the base metal will rediscover its magic in the remaining two months of the year.

Bank of America Merrill Lynch, in a recent note, said mixed fundamentals were clouding the outlook for nickel, with the collapse of LME warehouse stocks being balanced out by supply elsewhere.

“In our view, current dynamics on LME suggest that two traders have opposing positions.”

“One trader has been removing metal from LME warehouses and also because significant tonnages are cancelled, the (price) curve has flipped into backwardation.”

“Meanwhile, another market participant owns physical nickel and has hedged this position with a short on LME. That strategy has been profitable when curves were in contango. Yet, with the curve now backwardated, this has become an expensive trade.”

Backwardation refers to a commodity market structure where the front-month, or spot contract, trades at a premium to subsequent months. Here’s where investors “rolling” positions profit by selling an expiring spot contract at a premium and buying into the new front-month at a discount.

The contango is the opposite of this situation—i.e. discounted spot versus pricier subsequent contracts—and the trades in that situation lead to a loss.

BAML said the current status quo of LME’s nickel market was not sustainable, and it expects the warehousing situation to normalize as short position holders deliver metal to the LME at expiry of the contract and China exports more.

“In our view, the LME’s warehousing issues are critical in the current nickel market, where stocks on the exchange have declined, flipping the curve into backwardation, even though there is no evidence that the physical market is tight.”

While an alleviation of the nickel stockpile situation at the LME would certainly weigh further on the metal’s prices, the tightness perceived from Indonesia’s nickel ore export ban could balance that out, providing support.

“The export ban is certainly necessary to ensure that nickel reserves will still be adequate to supply both operating smelters and those still under construction. According to the Energy and Mineral Resources Ministry, as of this year, 11 smelters are already in production and 25 are still under construction. These plants will need 80 million tons of nickel ore a year.”

Presuming that all things remain equal demand-wise for nickel in the coming days, weeks and months, what could be the push-and-pull effect of remedying LME nickel stockpiles versus the Indonesian nickel ore export freeze?

While our recommendation for nickel remains “Neutral,” we have a top-end bullish target of $17,250.84 in the event of a breakout in the short-term. That’s a gain of $500, or 3%, from current trade levels.

Since both targets aren’t very far from the current price, it’s our prediction that nickel will end the year holding on to its commodities crown.

But if you need to liquidate or enter a new position before that, our advice is to go with the trend.