It doesn’t garner as many headlines as , but is the only base metal running almost neck-in-neck with the former in a near unbroken rally since April last year.

Three-month nickel on the London Metal Exchange is already up 11% since the start of the year, advancing 4% month-to-date after January’s 7% rise. 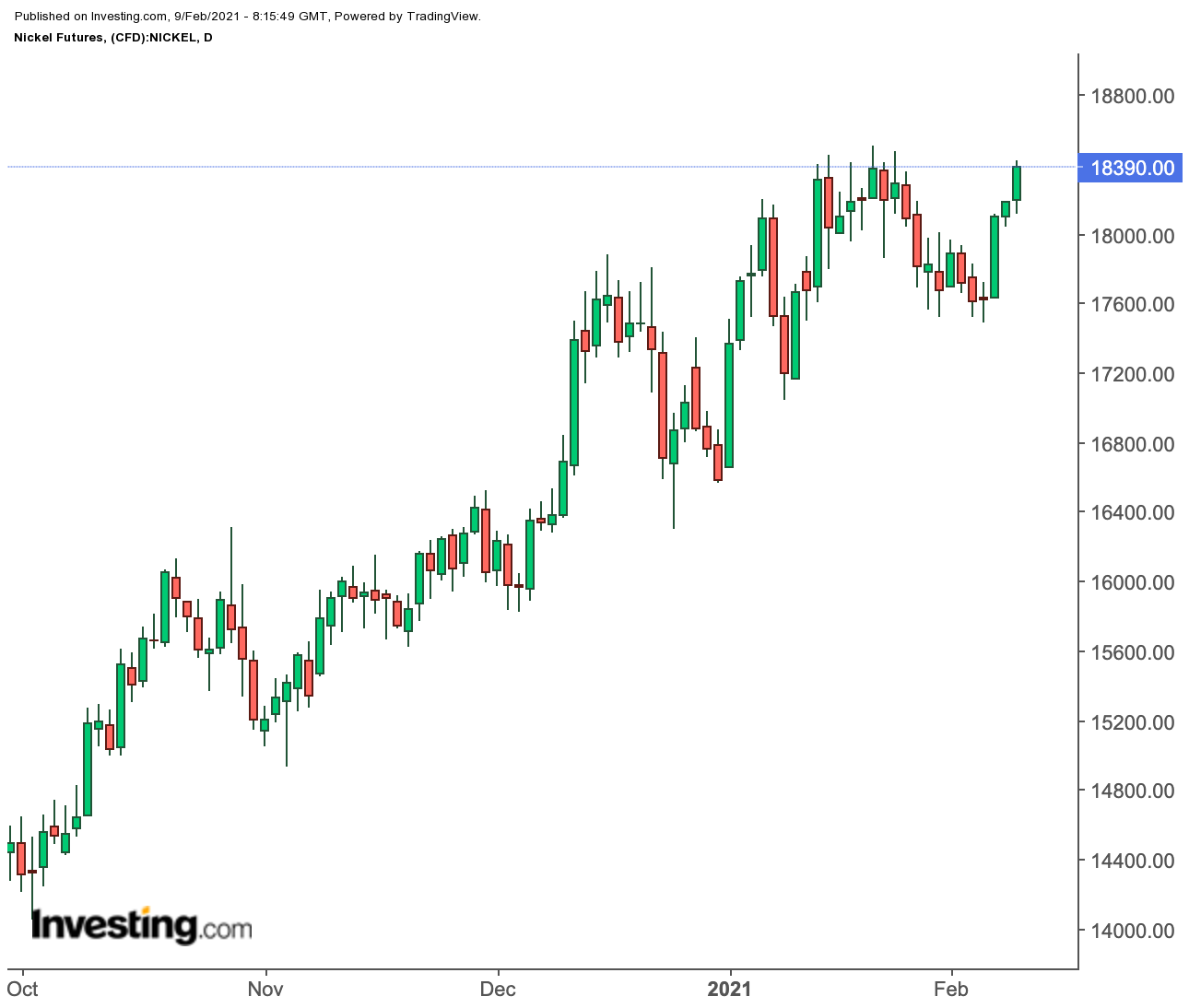 That’s after its whopping gain of 44% between April and December last year, with only one-month—September—breaking the streak with a 5% decline. And that too during economic lockdowns forced by the coronavirus pandemic.

Even Surplus Supply Might Not Dampen Nickel This Year

Bank of America, in an outlook published Monday, said it saw the metal maintaining a relatively-strong performance in 2021 by trending at $17,500 to $18,000.

The BofA research indicated that global consumption of nickel was likely to grow 13.5% in 2021 to reach 2.53 million tonnes, just lagging an estimated 5% growth in world output to 2.64 million.

The negligibly higher output, mostly from top producer Indonesia, might keep a lid on nickel prices but won’t be enough to suppress its rally, the bank said, adding:

“We expect a surplus for 2021. Indonesia is still flooding the global nickel market with nickel units, which should prices in check.”

But BofA also had this to say: “Nickel demand from electric vehicle production should rise in the coming years, providing for strong fundamentals.” 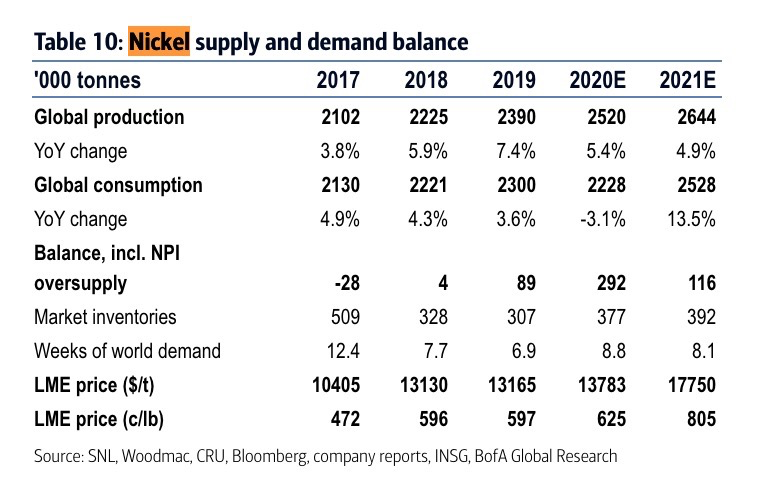 Adrian Gardner, principal analyst for nickel markets at Wood Mackenzie, said in a outlook published just before the start of this year that he expected nickel use in precursors for batteries to increase by about 11%, or 20,000 tonnes, in 2021.

“It is still early days for the EV (electric vehicle) precursor segment, but everyone is excited by it because of the strong year-on-year growth potential.”

“Looking ahead, we believe that nickel demand from the battery sector will accelerate … stimulated by EV-focused policies introduced as part of ‘green’ recovery plans in Europe, strengthening demand from the EV industry in China and the changing political landscape in the US.”

Gardner also said the broader increase in demand, accounting for about 160,000-170,000 tonnes, will likely come from the stainless steel segment, which made up for the largest use for nickel.

“Demand is expected to recover in all sectors, but the stainless steel and battery sectors are expected to perform the best.”

Conversely, Wood Mackenzie expects Chinese refined nickel production to fall from 785,000 tonnes in 2020 to 635,000 tonnes this year as its own NPI production falls. Elsewhere, Woodmac is expecting to see smaller production increases in Finland and Brazil.

“But the main story for 2021 is a constrained supply-side growth increase of 1.0-1.5% only, given the facilities which can expand and those in decline.”

“The first high-pressure acid leach projects in Indonesia targeting the battery supply chain are expected to come online in 2021, and the success of these projects in ramping up production will determine the outlook for ‘battery-suitable’ nickel supply over the coming decade.”

Disclaimer: Barani Krishnan does not own or hold a position in the commodities or securities he writes about. As an analyst for Investing.com he presents divergent views and market variables.

Comments are welcome and encouraged. Inappropriate comments will be reported and removed.

Chart Of The Day: Silver Rallies On ...