Today’s penultimate for 2019 ought to be good for the bulls, with a drawdown that should be 50% higher from the previous week and more than double year-ago levels.

What’s uncertain at this point is whether the market will be able to clear the $3 pricing bar early into the new year and hold above that level through the full winter schedule.

The warmest winter this decade was in 2012, when prices peaked at $2.97 per million metric British thermal units in January that year. Gas in storage that year began at 3.471 trillion cubic feet (tcf), up 347 billion cubic feet (bcf) from end-December 2011. In 2012, gas prices lost a cumulative 30% in the first quarter, before the onset of spring.

Since then, there have been three weak winters for gas prices: 2016, when the market fell almost 13%; 2018, when a 7% loss was realized; and this year, when the first quarter netted a near 10% loss. In all the three years, the market only tested $3 pricing in January.

Current Gas In Storage 23% Higher From Year Ago

This year, gas in storage so far stands at 3.411 tcf, according to the Energy Information Administration’s reading for the week ended Dec. 13. That is 638 bcf, or 23%, higher than the same week a year ago and just 9.0 bcf below the five-year average. 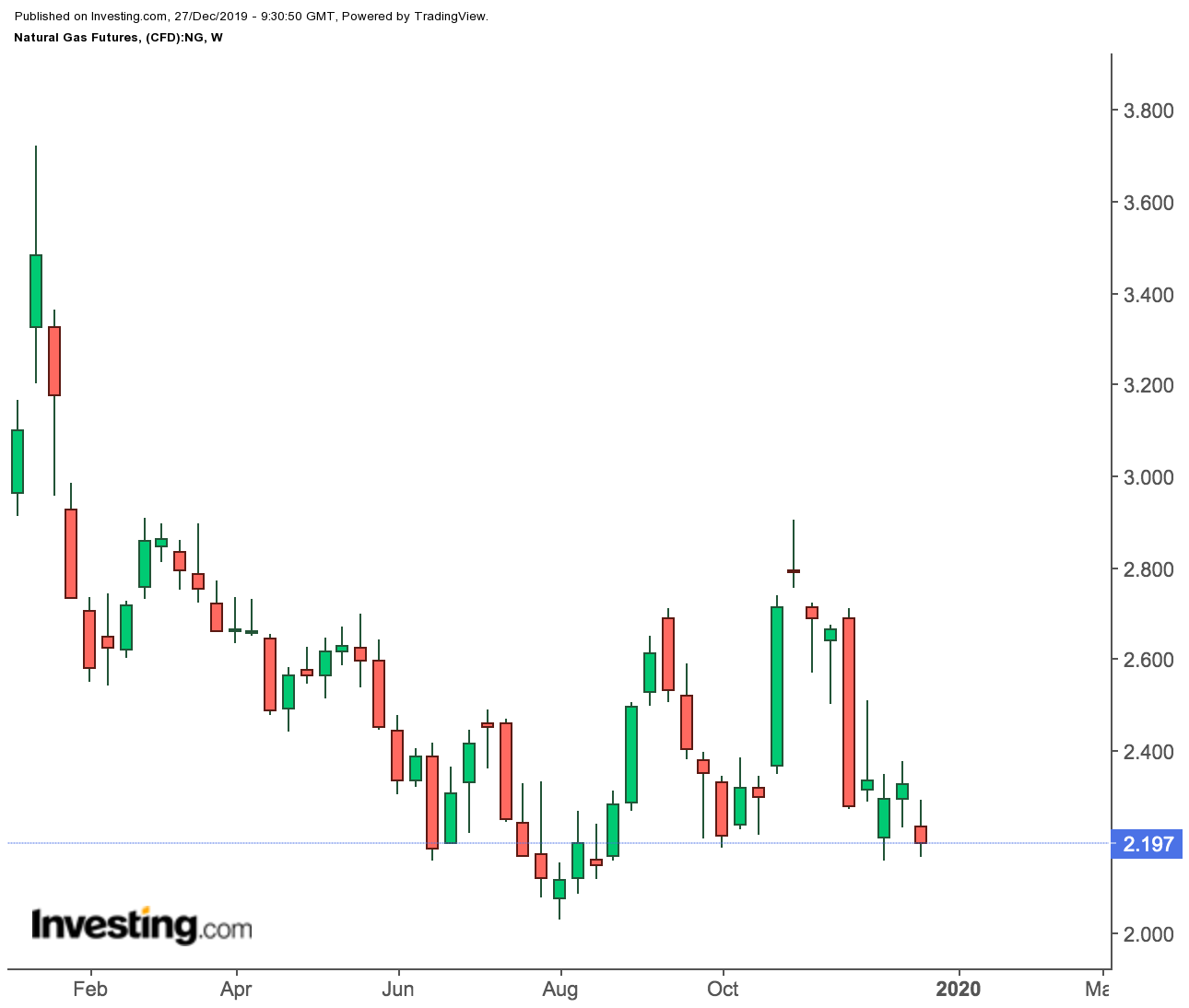 Ideally, this should translate to another weak winter pricing.But then again, natural gas prices don’t necessarily follow such a linear line of logic.

Why? For one thing, one can never be too sure of the extremities of each winter, until at least the end of the first quarter. Even then, there can be bitter cold until end-May, by which time there should be some thaw from the spring. The 2014 polar vortex, for instance, wiped out 52% of the gas in storage by the end of March that year from the first quarter of 2013, leaving just 824 bcf in inventories — the lowest ever for this decade.

This year, gas stockpiles have been bloated by record production, resulting from both direct drilling for gas as well as associated gas coming through as a by-product of oil fracking. According to the EIA, daily production has crossed record highs of above 96 bcf.

Only Real Cold Will Redeem This Winter’s Pricing

In such times of high inventories and production, often the only redeeming factor is the cold weather.

And that’s apparently what we got last week when a steady blast of pre-Christmas chill resulted in an estimated drawdown of 148-160 bcf from storage for the week ended Dec. 20. That would be 50% above the previous week’s draw of 107 bcf and more than double from the 61 bcf decline recorded a year ago.

Consequently, the on the New York Mercantile Exchange’s Henry Hub settled at $2.29 per mmBtu on Thursday after hitting four-month lows under $2.20 earlier in the week.

“Sustained cold weather is starting to hint at a return in the second half of winter and could still breathe some life into prices, especially with newly tightening, weather-independent fundamentals.”

But if weak demand and meager storage draws materialize without a turnaround on the horizon, Myers says “it will take prices to the brink of a new breakdown”.

Will Deep Freeze Last Through Q1?

Case in point: The back-to-back selloff between Monday and Tuesday that wiped out nearly 7% in cumulative values — a correction rectified partly by Thursday’s post-Christmas rebound that came on the back on short-covering and buying-on-the-dips.

“If you took your eyes off the market over Christmas Eve, you’d have missed the prompt month slip to $2.17, its lowest settle since late August,” Myers said. He refers to this as the market’s “inherent weakness”, despite the prospect of freezing weather.

Mobius Risk Group opined that “the bears decided to hibernate” on Thursday as colder forecasts were built out for the Midwest and the East Coast.

But Bespoke Weather Services said the swing higher in prices may have been exaggerated by “typical noise” as Henry Hub’s previous front-month, January, expired on Thursday amid a heavily-short market.

There were other caution flags too, the gas weather forecaster said in a report by naturalgasintel.com.

“One is that cash prices were very weak, trading under $2 late in the session” on Thursday, Bespoke chief meteorologist Brian Lovern was quoted as saying in that report. “Yes, we still have a lot of holiday impact, but that’s still quite weak no matter how you cut it.”

Bespoke also isn’t convinced that the near-term weather pattern will deliver enough cold “as the Pacific and Atlantic sides of the pattern still are more supportive for warmer risks versus anything colder.”

“For these reasons, we feel there is risk of a pullback in prices once the smoke clears from January contract expiration.”