Like rats fleeing a sinking ship, the funds that feasted on the highs in natural gas futures just weeks ago have abandoned their positions on signs that the near-term icy blast expected in many gas-fired heating regions will take longer to materialize.

It’s not just the weather that’s weighing on the market. numbers for gas, due at 10:30 AM ET today, are expected to show a drawdown of less than 30 billion cubic feet for the week ended Nov. 22 — less than half of the consumption for the same week a year ago.

Production, meanwhile, is on the upswing again. According to energy markets intelligence firm Genscape, U.S. gas output on Monday was back to a record 94.39 billion cubic feet per day, after the freeze-offs and maintenance works earlier this month that reduced some output.

While a switch in the on the New York Mercantile Exchange’s Henry Hub to January from December had enabled the market to defend the $2.50 per million British thermal units support, analyst Scott Shelton warns that gas funds “had turned heavy sellers … and likely to sell more.” Just on Nov. 5, Henry Hub’s front-month had hit 8-½ month highs of $2.91 per mmBtu — about 14% above current levels. 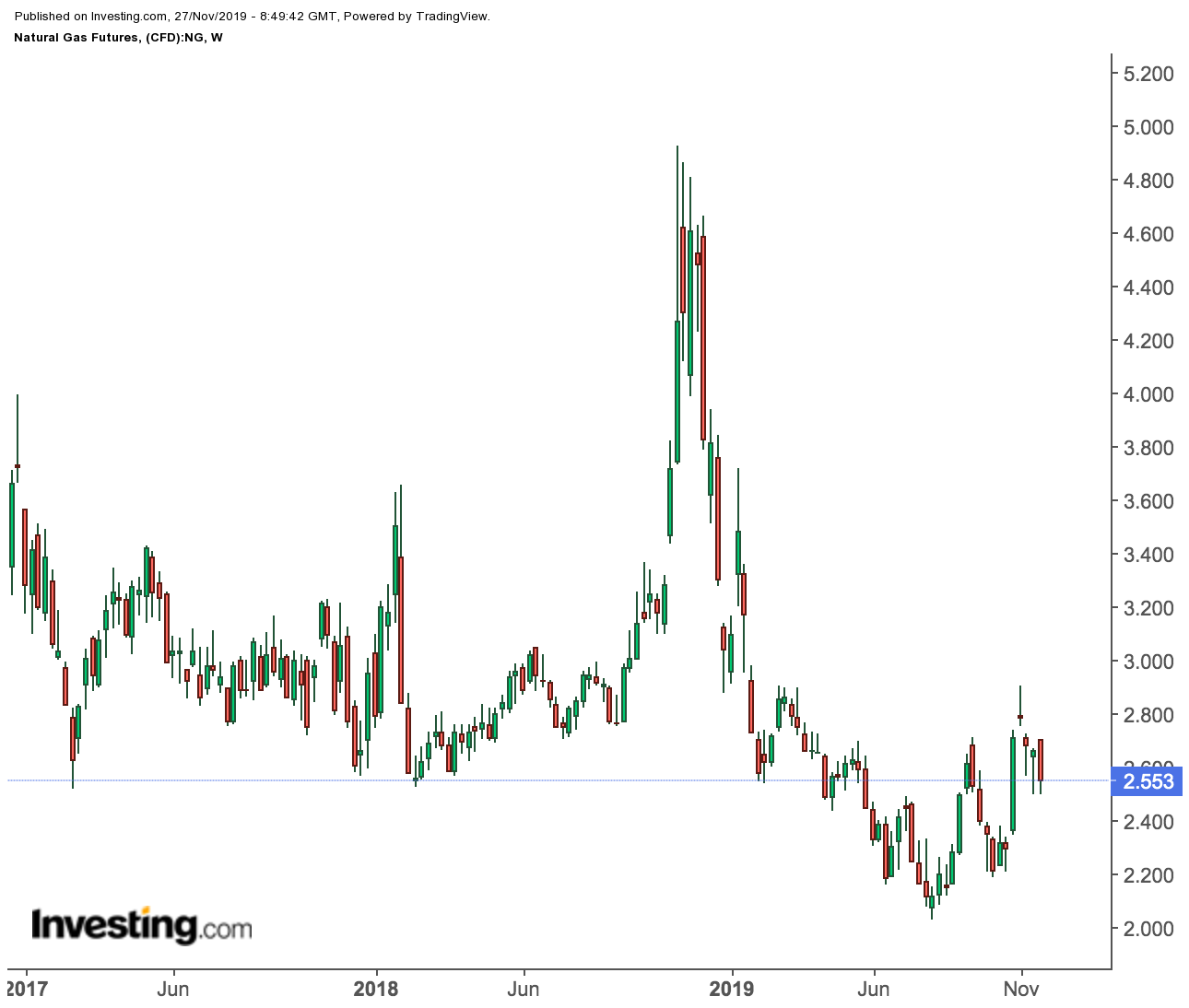 Investing.com’s Daily Technical Outlook calls for a “Strong Sell” on January gas, citing a bottom as low as $2.42. Should the trend reverse, then the most bullish case is $2.65.

My views are pretty simple … bearish the front end until the curve gets flat.”

Shelton bases his call on the dynamic weather changes over the past three weeks.

“The weather hype of Polar Vortexes, CFS and Euro weekly witchcraft failed to show up over the weekend,” he said, referring to the North Pole extreme winter event, the U.S. Climate Forecast System and European Center for Medium-Range Weather Forecast (ECMRW).

The three represented readings that many gas bulls had relied on to steady demand in a market in persistent decline since the weekend of Nov. 3.

Instead of frigid weather, what emerged since Friday were indications of milder-than-expected temperatures that prompted hedging with a “low confidence” for December, Shelton said.

“If there is anything bullish out there today, it’s Asian and European weather which is below-normal but certainly won’t drive the U.S. markets.”

Mild Thanksgiving In Some Places, Winter In Others

Dominick Chirichella, director of trading risk at the Energy Management Institute in New York, says this week’s bearish data on gas storage will likely play out for the coming week too. He cites the combination of Thursday’s Thanksgiving holiday and warmer-than-normal temperatures in key heating regions that could lead to less gas demand.

Despite such bearish projections, a snowy Thanksgiving weekend is anticipated in various states.

According to the National Weather Service, stormy winter weather could disrupt Thanksgiving travel plans across “large portions” of the Central and Western United States.

Naturalgasintel.com reports that spot traders had plenty to consider on Tuesday as they locked in deals for four-day delivery over the long holiday weekend and through the end of the month (Nov. 27-30).

For now though, weather forecasts are mixed.

According to models studied by Chirichella’s Energy Management Institute, below-normal temperatures will spread across the Central/East for days 6-10 overall, “but warmth eyes a return for days 11-15 and models are trending warmer.”

“More seasonable temperatures are expected across the Central/Eastern U.S. for days 11-15, although uncertainty is high at this range.”

China accuses US of ‘sinister intentions’ after ...

3 Signs It’s Getting Harder For OPEC ...