Buckle up, folks. The “Bucking Bronco” of energy might return. The current forecasts for warmer weather, when it should be a steadily cooling autumn, could send natgas futures on a wild ride.

After three-weeks of gains with few halts, the buck for the gas rally stopped at the door of weather forecasting agencies as the higher temperatures they predicted for the coming days hit the market like a sledgehammer.

The on the New York Mercantile Exchange’s Henry Hub dropped 7.7% to settle at $2.64 per million metric British thermal units on Wednesday. 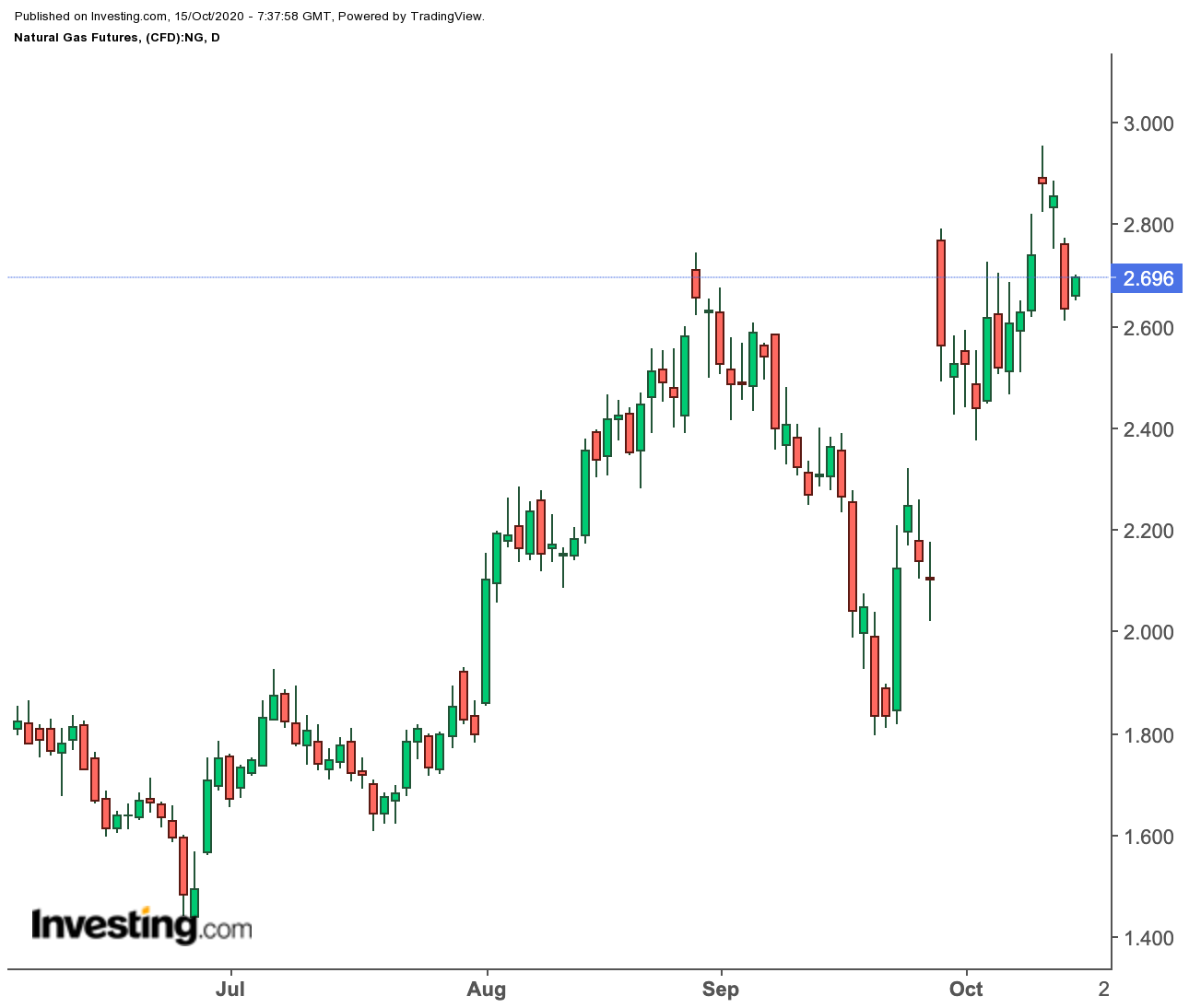 Sentiment was probably helped by expectations of a positive gas expected later in the day from the U.S. Energy Information Administration (EIA).

Ahead of the EIA data, due at 10:30 AM ET (14:30 GMT), industry analysts forecast that U.S. utilities injected 55 billion cubic feet into storage last week, after burning what was required for power and heating needs in the week to Oct. 9.

If true, that would be an underwhelming injection, compared to the 75 bcf addition to storage during the previous week ended Oct. 2.

Yet, once the EIA’s numbers are known, analysts expect the market’s attention to return to the weather in the coming days.

“Milder weather is expected throughout the next few weeks.”

“Long term forecasts indicate a bleak future, with sustained warmer than expected weather lasting until January. Keep in mind these longer forecasts are subject to change and new developments may arise. However, current predictions indicate that higher-than-initially expected temperatures in the South may buoy winter demand in the future.”

The weather card aside, gas production in the coming days is also expected to be higher with output facilities on the U.S. Gulf Coast of Mexico returning to service from disruptions caused by Hurricane Delta.

Gas Production To Rise As Hurricane Delta Bows Out

According to the Bureau of Safety and Environmental Enforcement, which comes under the Department of Interior, only 809 million metric cubic feet per day of Gulf gas production remained shut as of Thursday. This represented nearly 30% of Gulf production, down from the 36% noted Monday, which idled nearly 1,276 mmcfd.

“Gas production will continue to steadily rise throughout the week as operators return to offshore sites” of the Gulf.

The weather, meanwhile, is expected to offer little upside to gas prices, according to Bespoke Weather Services’ readings reported by naturalgasintel.com.

“Once again, the changes come thanks to a western shift regarding placement of the upcoming cold, resulting in much less impact in the key areas of the Midwest and East. This now places the 15-day period as a whole back below normal rather easily.”

Both the American and European models made sizable warmer changes on Wednesday, according to the forecaster.

Bespoke’s forecast leans toward the European model, given the La Niña base case state. The late-month pattern shows less potential for notable cold as well, according to the forecaster. This would align with its theory of a warmer start to November if it’s upheld.

The American model, which had been much colder, lost even more demand in the latest run to better align with its European counterpart. Bespoke added:

“This is also consistent with what the climate models have been suggesting heading into November, having never wavered, at least so far.”

ICAP Technical Analysis’ Brian Larose told naturalgasintel.com that while gas bears were unable to crack $2.784-$2.732 on Tuesday, it looks more like they ran out of time, rather than steam.

If bulls can quickly carve out a bottom, there is still a chance to salvage the up-trend, he said.

“If weather is warmer than normal by a much larger margin than what is currently predicted by several professional forecasting services, the market will undoubtedly have to address lingering inventory concerns, but managing upside risk through hopes of a warm winter could prove to be problematic.”

On the LNG front, news of a sunken barge in the Calcasieu Ship Channel quashed hopes for a quick resumption in full exports from the Cameron liquefied natural gas facility.

Traders had been banking on steadily rising LNG exports, particularly from the Cameron terminal, since the facility was ramping up production following Hurricane Delta when the incident took place.

However, the U.S. Army Corps of Engineers, Coast Guard and others are now working to remove three obstructions in the Calcasieu Ship Channel following Delta. Crews would also need to determine how much shoaling took place during the latest hurricane before deep draft vessel traffic could resume. Dredging was nearly complete in the wake of Hurricane Laura when Delta crashed ashore on Oct. 9.

EBW Analytics Group pointed out that although Sabine Pass was ramping up production and Cove Point was back at full capacity following maintenance, the sunk barge impeding Cameron may offset some of this higher feed gas demand. “The market will have lost an estimated 1.6 Bcf/d of demand.”

Disclaimer: Barani Krishnan does not have a position in the commodities or securities he writes about.