Natural Gas: Strap Down, The Ride Isn’t Over

A couple of weeks back, we explored in this column the wild bronco ride that natural gas can be.

After five out of six weeks in the red, gas futures on New York’s Henry Hub suddenly turned parabolic, leaving bulls with an 18% gain. Of course, the very nature of volatile markets are that what goes up often comes down. So, here we are this week, staring at a near 4% loss, at the time of writing at least. 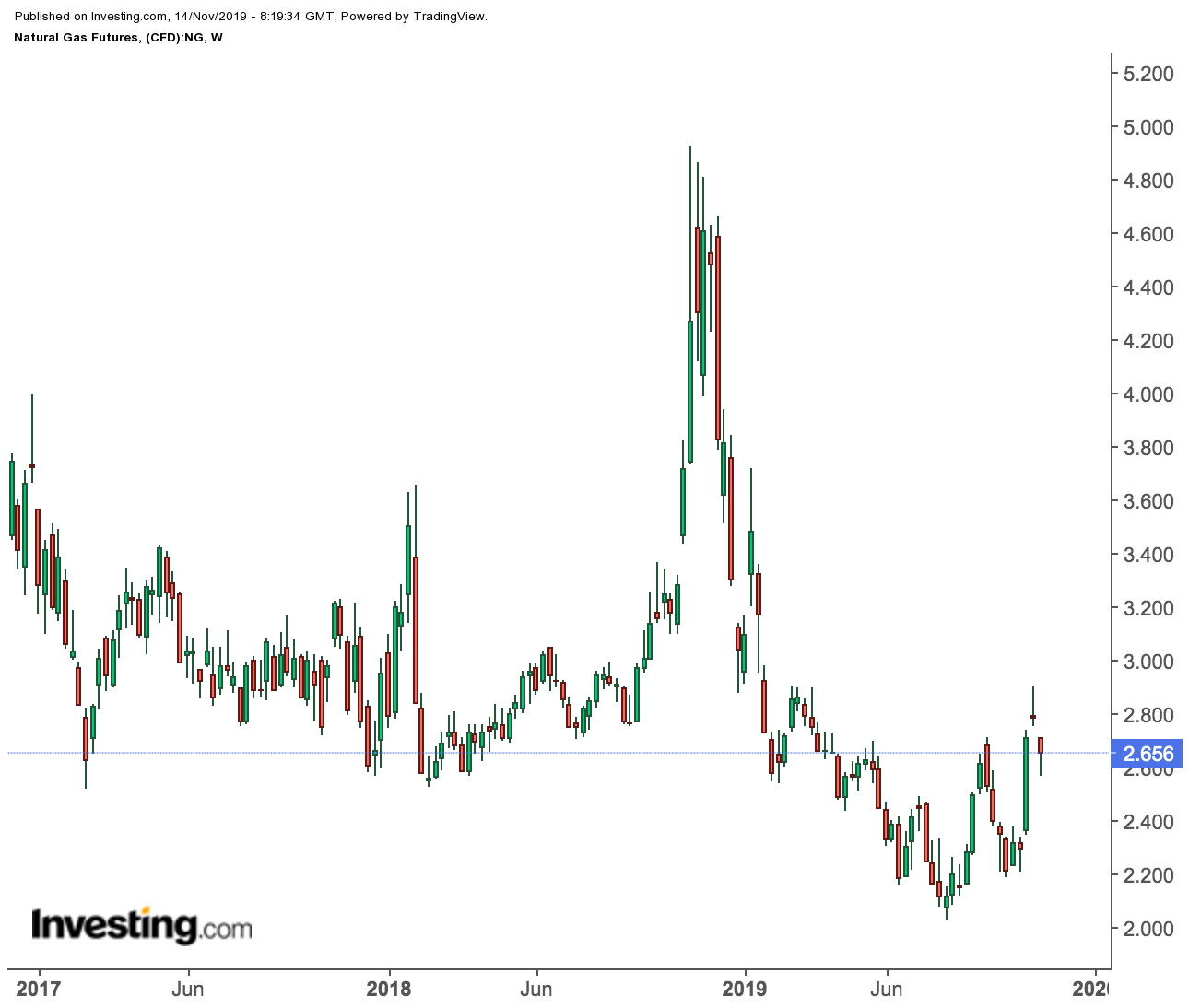 And if gas is to live to its mercurial moods, it’d be safe to assume there’d be more swings in the coming days and weeks. Those convinced about a freezing late November/early December will be battling wits with others who think the market is overhyped on the weather at least in the near-term, and needs to go lower.

With Henry Hub’s hitting two-week lows at $2.571 per million metric British thermal units in Wednesday’s session, some analysts think the imminent battle would be fought over the $2.50 per mmBtu support.

“Although demand remains elevated … the return of near- and above-average temperatures to areas of the eastern U.S. next week will diminish the need for heating,” said Dan Myers, analyst at Houston-based gas risk consultancy Gelber & Associates. “With this in mind, NYMEX natural gas futures are looking beyond the immediate cold spell.”

With benchmark December futures’ test below $2.60 on Wednesday, Myers said, “similar 1% losses permeate down the curve into the 2020 strip, as next year’s average futures price slips back below $2.50.”

The make or break of the $2.50 support could hinge on what the U.S. Energy Information Administration reports as weekly difference for in data due at 11:00 AM ET today. A trade consensus puts gas storage build for the week ended Nov. 8 at 45 billion cubic feet versus the previous week’s surprisingly small 34 bcf.

Could The Market’s Red Line Extend?

“Bottom line to me is that the market is still on its way to 2.50 and the Q1 spreads should continue to flatten.”

“I think CTAs are flat here in general, though some of the momentum based systems are likely getting short again. We saw selling in weather-related markets yesterday which is a sign that there is selling NG on their computer based systems as well.”

But Shelton also said weather models over the 11-15 day period were somewhat supportive, and that could discourage an extensive downside.

“I would think there are short term CTA sellers in the market lately, but not the major sellers seen on a trend change. I think to get them short again, it will take more time and weakness as the don’t flip back that easily.”

Dominick Chirichella, director of risk and trading at the Energy Management Institute of New York, concurs on the moderate cold theme.

“Temperatures should not stray too far from normal in either direction across most of the US for days 11-15,” said Chirichella. “The best chance of warm anomalies will be across the interior West through the southern US where modest warm anomalies are maintained.”

Myers said bulls who’ve been on the back foot lately will attempt a comeback if the EIA storage data comes close to matching last week’s smallish bull.

“However, near-normal temperatures expected in subsequent weeks will allow record production to push back and curb withdrawals in the second half of November,” he added.